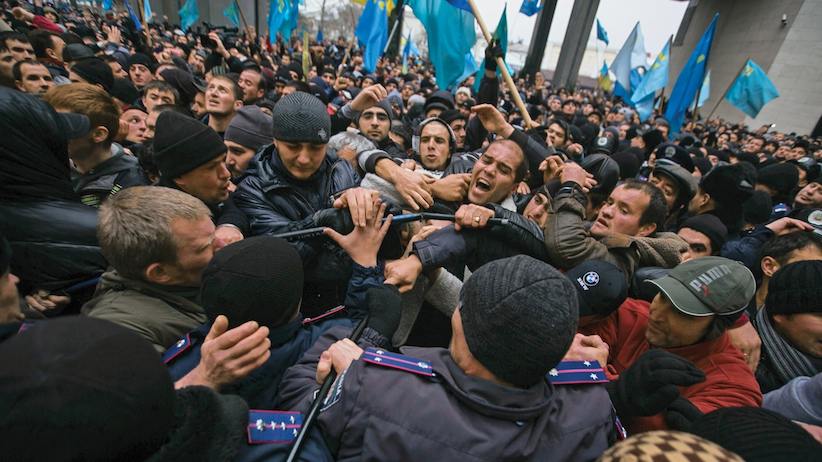 Ukrainian police try and separate ethnic Russians and Crimean Tatars (R) during rallies near the Crimean parliament building in Simferopol February 26, 2014. Thousands of pro-Russia separatists tussled with supporters of Ukraine’s new leaders in Crimea on Wednesday as tempers boiled over the future of the region following the upheaval that swept away President Viktor Yanukovich. One person died, apparently of a heart attack, and two others were trampled and injured when people stumbled and fell to the ground in the crush, witnesses said. (Baz Ratner/Reuters)

OTTAWA – Canada has denounced the controversial referendum in Ukraine’s Crimean Peninsula on Sunday that showed overwhelming support to split off and join Russia, saying it would lead to further isolation of Russia’s Vladimir Putin.

“The so-called referendum held today was conducted with Crimea under illegal military occupation. Its results are a reflection of nothing more than Russian military control,” Prime Minister Stephen Harper said in a statement.

“This ‘referendum’ is illegitimate, it has no legal effect, and we do not recognize its outcome,” the prime minister said, adding Canada is working with other countries on the possibility of further sanctions.

“Any solution to this crisis must respect the territorial integrity, sovereignty and independence of Ukraine as well as the constitution of Ukraine. Mr. Putin’s reckless and unilateral actions will lead only to Russia’s further economic and political isolation from the international community.”

Earlier Sunday, protesters in at least two Canadian cities joined the international condemnation against the ballot.

Some protesters applauded Harper’s decision to travel to Ukraine this Friday to show support for the temporary government in the face of Russian aggression in the strategic Black Sea region.

“This is an already an important symbolic visit showing support to the Ukrainians,” said Lada Roslycky, a human rights campaigner who organized an Ottawa protest across the street from the Russian embassy.

About 100 protesters staged a mock referendum outside the heavily-guarded embassy. They brandished signs that denounced Russian President Vladimir Putin as organizers passed out fake cash, and urged mock voters to vote as often as they liked for either of two options to cede from Russia — yes and yes — as demonstrators in military garb stood over a fake ballot box.

They were joined by hundreds in downtown Toronto who braved frigid temperatures to march against what they called an illegitimate ballot.

They took to the streets just hours before the committee managing the referendum released results that said 95 per cent of voters supported joining Russia. That was based on half of the ballots counted by Sunday evening.

Standing across the street from the Russian embassy, Yaroslav Baran, a former senior Conservative aide, denounced the Crimea ballot as “an old style Soviet election.”

“It’s really frightening,” said Baran, who is of Ukrainian descent and has relatives living close to the Crimean Peninsula.

“This is classic Putin playbook. We’ve seen it in Georgia, we’ve seen it in Azerbaijan — doing this in the name of protecting minorities … and it turns into a permanent military occupation.”

Andrew Tsylke, a Kyiv native living in Ottawa, was visibly struggling with his emotions as he contemplated the situation in his homeland.

Roslycky suggested Canada and its allies could impose travel restrictions on the wives of Russian oligarchs, “the ladies who are associated with the men who are running the Crimea because they have a tendency to go and shop in very expensive places, spend a lot of money in Europe and in the U.S.”

Roslycky said that could put pressure on Russian officials “to cool it.” She said Russians who typically get to travel abroad are not the poor people who suffer under Putin’s oppression.

Canada and its allies say Sunday’s snap referendum is illegal and they will not recognize its result.

In Toronto, marcher Olena Wachna said Sunday’s referendum was bogus and slanted against Crimea remaining in the country.

“I don’t think the questions asked in the referendum represent democracy. I think that the choices they’ve given to people — to separate or to become part of Russia — are just there to support Putin’s bad reasoning to invade Ukraine,” she said, adding she’s worried about her family in Ukraine.

Olha Sorokivska, who came to Toronto from Ukraine two years ago, said she’s concerned about what will happen to those who oppose the referendum, which she called pro-Russian.

“I’m really worried for people who are against that, because they can be prosecuted and their rights can be not protected there,” she said.

Many of its residents have said they fear the new Ukrainian government that is now in place after their Russian-backed President Viktor Yanukovych fled to Russia.