Harper to urge G7 to take stand on Putin

The only G7 leader to have visited Ukraine, Prime Minister looks to demand action on Russia 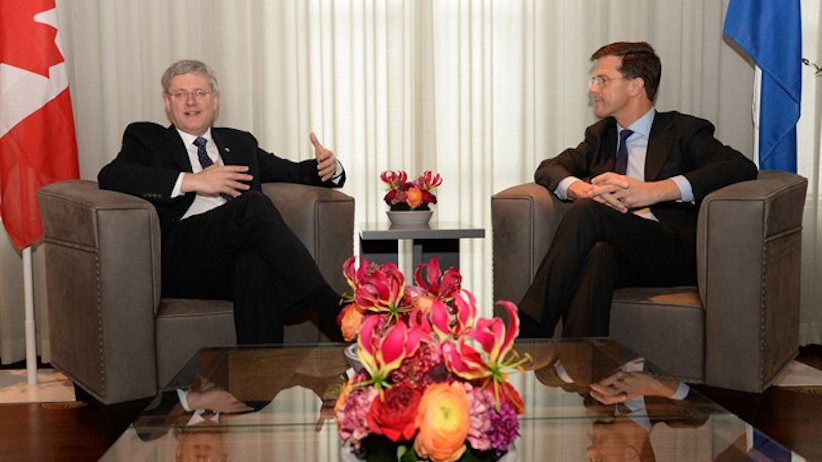 THE HAGUE, Netherlands – Stephen Harper heads to emergency G7 talks on Monday as the only leader in attendance who’s personally witnessed the turmoil in Ukraine, clearly keen to advocate a tougher stand against Russia amid the biggest European crisis since the Cold War.

The prime minister called for a “complete reversal” of Russia’s recent actions in Crimea, including its formal annexation of the strategic Black Sea peninsula, during his six-hour visit to Kyiv on Saturday.

He also suggested Russia should be booted out of the G8 and warned that Russian President Vladimir Putin cannot be trusted.

Others are sounding similar alarm bells about Putin’s actions — past, present and future.

“This is the most serious risk to European security we have seen so far in the 21st century,” Britain’s foreign minister, William Hague, wrote in an opinion piece for the Daily Telegraph newspaper on Sunday.

“Vital principles are at stake, including the territorial integrity of European nations and the right of democratic countries to choose their own future.”

In The Hague on Monday, the G7 will hold a summit on the sidelines of the Nuclear Security Summit, now overshadowed by the ominous events in eastern Europe.

The summit will be held at the official residence of the Dutch prime minister under tight security that will likely include blocking the mobile phones of the G7 leaders. Similar action was reportedly taken Friday in Brussels due to concerns about Russian espionage when European leaders met to discuss the crisis.

That meeting was tense. British Prime Minister David Cameron reportedly clashed with German Chancellor Angela Merkel, urging her to take aim at the Russian billionaires active in her country.

Cameron suggested he may even impose sanctions on Roman Abramovich, the oligarch who owns the famed Chelsea soccer club.

At the G7 summit, Harper is expected to warn his colleagues that Putin cannot be trusted to stop at Ukraine and that his actions will spur similar brazen territory grabs if they go unpunished.

“President Putin has provided a rationale for those elsewhere, who needed little more than that already furnished by pride or grievance, to arm themselves to the teeth,” he said in Kyiv.

The G7 summit is being held as thousands of Russian troops amass on the southeast border of Ukraine while the new Ukrainian leaders continue to plead for military assistance from the West.

There are concerns that Russia could use the unrest in the eastern reaches of the country, where there’s a large Russian minority, as a pretext for crossing the border.

But an age-old debate between hawks and doves is raging within Western political and diplomatic circles over what to do. While some, like Harper, argue a “shot needs to be fired across Putin’s bow,” says one Canadian expert, others fear such a course of action could dangerously escalate the tensions.

Will Harper’s colleagues listen to him?

“The prime minister is one of the elder statesmen in the G7, so that lends him credibility,” Fen Hampson, a director at the Centre for International Governance Innovation in Waterloo, said in an interview Sunday.

“But there’s a fault line in the G7. I suspect Harper and Barack Obama will be on one side of the street in terms of much tougher sanctions, and the European nations will be on the other given the European Union has trade dependence on Russia.”

Hampson predicted the leaders will emerge from the meeting to announce they’re at least temporarily suspending Putin from the G8.

“A suspension of Russia from the G8 would send a very strong symbolic message that would be consistent with other international organizations that have suspended members for bad behaviour.”

Paul Grod, head of the Ukrainian Canadian Congress and part of the Canadian delegation that travelled to Kyiv, says Harper is a respected voice on Ukraine within the G7.

“He’s a big fan of the G7 and sees its evolving role on the international scene, not just an economic role but in terms of international security,” Grod said as he stood near Independence Square in Kyiv, at the epicentre of the Ukrainian uprising this winter.

“We hope to see when he meets with the G7 that he’ll be able to sway them with personal, first-hand discussions and a view of the situation Ukraine, and convince them to in fact push Russia out of the G8 and make it a G7.”