Has Harper hurt Canada’s position in the world?

A survey of international changes under Harper, from trade to diplomatic data, suggests the answer is 'no'

Here in New York, Prime Minister Harper is arriving to address the United Nations General Assembly. Back in Canada, commentators are repeating the widely accepted opinion that Canada’s global reputation has eroded badly under the Conservative government.

There appears to be abundant anecdotal evidence of this decline. Canada failed to secure a Security Council seat. The Prime Minister consistently snubs the multilateral meetings like the Climate Change summit. Retired Canadian ambassadors (a terminally disgruntled corps) regularly disparage all of the government’s major foreign policy positions, from Israel to China to Syria. U.S. President Barack Obama never calls Harper and refuses to approve the Keystone Pipeline. In fact, many Ottawa-based academics will assure you “things have never been worse” at the Department of Foreign Affairs. For those who pay attention to these things, it is considered an article of faith that Canada’s role in the world has faded.

But what if we try to test this quantitatively?

Recently, Maclean’s contributor Stephen Gordon provocatively applied this approach to consider the economic changes under Harper. Always eager to ape my betters, I have attempted to do the same in regards to the international changes under Harper. I started by breaking down the idea of international influence or power into five measurable elements: economic, military, diplomatic, interpersonal, and “soft” or reputational. Let’s see how the numbers from 2005 compare to today.

The trade figures are relatively positive. Since 2005, Canada’s exports have increased by eight per cent, in spite of a global recession and a historically strong dollar. Likewise, foreign direct investment in Canada is up a remarkable 73 per cent. Nine years ago, Canada had concluded four free trade agreements. That number has now tripled to 12, with another 11 being negotiated. The World Economic Forum’s Global Competitiveness Index has kept Canada relatively stable, shifting from 13th to 15th position. You could argue that Canadian trade should be doing even better (I would—Bay Street remains congenitally frightened of booming frontier markets in Africa and Asia), but, overall, it is clear that Canada’s global economic strength has improved.

The military picture is not as clear. Canadian defence spending is up 18 per cent. Likewise, troop numbers have increased 11 per cent. But how many air-worthy helicopters do we have, compared to nine years ago? How quickly can we deploy a battle group after a decade of hard fighting in Afghanistan? Those numbers evade me.

The diplomatic figures are surprising. It is an uncontested fact, as argued recently by former prime minister Joe Clark, that Harper has starved Canada’s “diplomatic and development capacity.” Yet the Department of Foreign Affairs budget has increased 32 per cent and international aid has grown 31 per cent since 2005. Number of staff in those departments? Up seven per cent at headquarters and up four per cent abroad. Unexpectedly, support for the oft-vilified multilateral institutions such as the United Nations has increased by 73 per cent. By contrast, personnel contributions to peacekeeping missions have remained low, though. Embassy numbers? Steady.

People-to-people contact? Mixed. The number of Canadians travelling abroad has increased 49 per cent, but the number of foreign tourists to Canada has dropped 33 per cent—possibly an effect of the strong dollar. But that did not hamper international students enrolled in Canada, which went up by 59 per cent over the same period. Immigration? Steady at about 260,000 per year, but the number of refugees accepted dropped seven per cent.

So-called “soft power” is the most nebulous element to consider and, perhaps not coincidentally, the most cited example of how Canada’s role has diminished in the world. An intriguing illustration: Worldwide Google searches for the word “Canada” declined 52 per cent since 2005. Yet establishing representatively comprehensive numbers on this is tricky. There are, however, a few organizations that publish annual reputational indexes based on dozens of diverse indicators, such international book sales, news headlines, and even Olympic medals. Three of these indices go back to 2005 and they tell a similar story. The Simon Anholt Nations Brands Index has kept Canada among the Top 5 most popular nations for the last eight years. The BBC GlobalScan ranked Canada among the Top 3 most positively perceived countries throughout the same time period. And, although Canada did not crack the Top 10 in FutureBrand’s first Country Brand Index in 2005, we placed second last year (damn you, Switzerland). Canada’s reputation does not appear to be tanking.

Has Canada’s position in the world declined? It is possible, although these numbers suggest otherwise. In fact, it looks as though it has improved under Harper. Critics can reasonably argue that things could be even better, but it is difficult to make the quantitative case that Canada’s international situation has deteriorated in the last nine years.

But maybe you can. The numbers cited are listed below. I welcome suggestions for more accurate (and creative) alternatives. 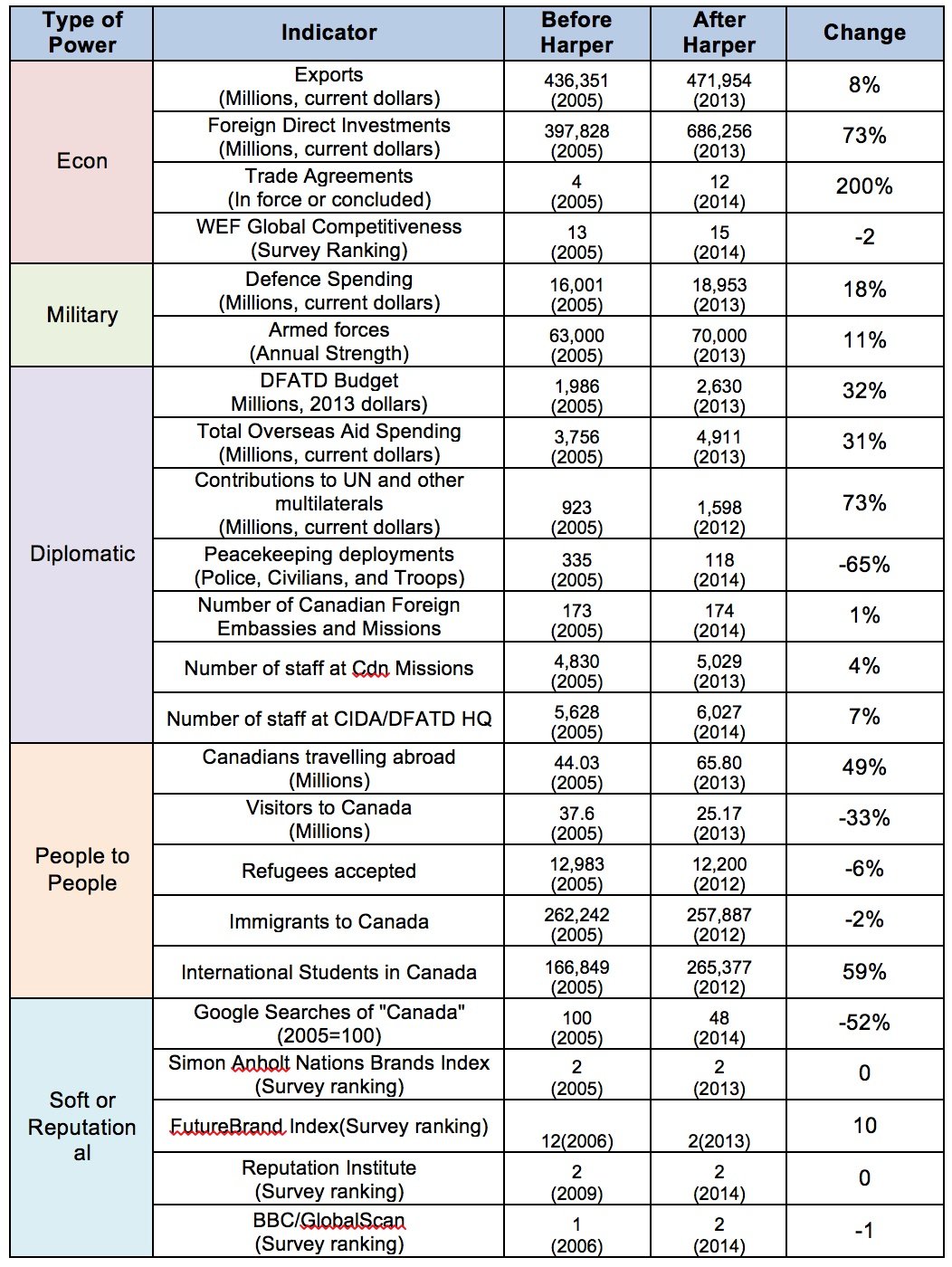