Gbagbo has brought his country to the brink of civil war

The Ivory Coast dictator is refusing to give up power 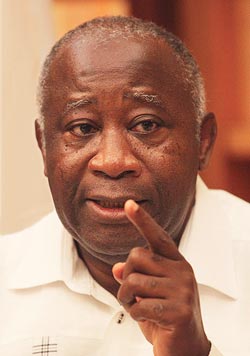 With the world’s attention focused on the Libyan conflict and pro-democracy uprisings sweeping North Africa, another African dictator’s refusal to give up power has resulted in the complete collapse of his country, leaving it on the brink of anarchy and civil war.

In Ivory Coast, Laurent Gbagbo continues to cling to the presidency despite losing the November 2010 election to his rival, Alassane Ouattara. It was a power grab that resulted in international condemnation, economic sanctions and a delegation of African Union leaders paying him a visit to demand that he cede power. Instead, Gbagbo unleashed a wave of violence. So far, 365 people are dead, and an untold number of rapes, abductions and disappearances have been conducted by security forces and pro-Gbagbo thugs.

Today, Abidjan is a war zone, with pitched battles raging between trained militias loyal to Gbagbo and the insurgent Forces Nouvelles rebels who support Ouattara. Both are using heavy weaponry; pro-Gbagbo youth militias are looting and burning the houses of pro-Ouattara politicians. There are unconfirmed reports of soldiers entering hospitals and executing wounded victims. “You can’t really understate how cruel and sadistic the combat has become,” says Marco Oved, a Canadian journalist with the Associated Press based in Abidjan. “What is going on here are war crimes.”

On Feb. 28, Gbagbo cut off electricity and water supplies to the northern region held by rebels since the end of the Ivorian civil war in 2004, a move potentially affecting millions of people in the region. Four days later, seven women were killed by machine-gun fire in the suburb of Abobo while protesting against the violence.

Meanwhile, Ouattara remains holed up in Abidjan’s Gulf Hotel, which has been transformed into a military compound protected by UN peacekeepers, complete with machine-gun nests, anti-aircraft guns and tanks. The Forces Nouvelles militia has moved into the city to fight on his behalf. But because Ouattara considers himself to be the elected president, he does not want to appear to be taking the country by force. That may, however, turn out to be his only option, given Gbagbo’s stubbornness.

A report released last week by the International Crisis Group warns of dire consequences for the West African region should the violence continue unchecked. “The most likely scenario in the coming months,” concludes the report, “is armed conflict involving massive violence against civilians, Ivorian and foreign alike, that could provoke unilateral intervention by neighbours, starting with Burkina-Faso.” The ICG is recommending that West African states immediately address the crisis with AU and UN support, while urging Ouattara to launch a dialogue between his party and Gbagbo’s, but without the participation of the “irreconcilable” Gbagbo himself.

With his assets frozen and the country financially isolated, Gbagbo’s money may almost be running out. It might not be long before he and his supporters make one last stand, with a potentially murderous campaign that could plunge the country into a civil war.