It's been her majesty’s pleasure

The Queen's radiant smile flooded her face, even as she stood in the rain for hours 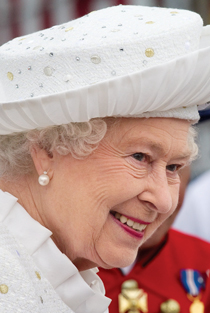 Sixty years into her monarchy, Queen Elizabeth II finally appears to be having a good time. There she was on her gilded royal barge floating down the Thames, as always thoughtfully attired for her subjects’ benefit: her Swarovski-encrusted white bouclé coat made her easy to spot amid blue navel mufti and red-jacketed guards. Her jewellery cunningly paid homage to her earlier jubilees, the silver and gold ones. But the Queen’s true stealth accessory was a radiant smile that flooded her face with joy, even as she stood stoically amid blustery chill and drizzle. So it was throughout the giddy four-day Diamond Jubilee blowout that witnessed horses galloping, 1,000-plus ships sailing, celebrity lords singing and a national beacon lighting.

The Queen’s joyful countenance was duly noted by long-time royal watchers who know the monarch as neither a promiscuous nor political smiler. In portraits, her expression recalls the glassy, remote aspect of Madame Tussauds’ best work. Her face in repose tends toward serious, even scowl. When she does smile, it’s unmistakably authentic.

The obvious explanation for Elizabeth II’s happy countenance is that in this her 87th year, her annus mirabilis, she has much to smile about. At her side is Prince Philip, duke of Edinburgh, her marital ally of nearly 65 years (though he was admitted to hospital on Monday with an infection). Her decades of leading by example, of toiling like a Clydesdale, have paid off. Few loose ends remain. The uncertainty that once swirled around Prince Charles’s suitability to reign has lifted, as has antipathy toward Camilla, his second wife. And last year’s pitch-perfect royal nuptials of Prince William to Kate Middleton ushered in a new surge of royal mania.

The Queen can also take pride in her role as a comeback artist, Betty White’s regal counterpart. In Our Queen, royal biographer Robert Hardman divides the Queen’s reign into three acts: Act I, from 1952 to the 1977 Silver Jubilee, was “good”; Act II, from 1977 to the 2002 Golden Jubilee, was “bad.” From 2002 on has been “good,” though in fairness it has been better than good with the Queen reaching the height of her power in her ninth decade. She still grinds her way through nearly 400 engagements a year. In 2011, she visited Dublin, the first British monarch in more than a century to do so.

Yet the Queen’s smile can also be seen as a marker of royal evolution. For the radiant, relaxed monarch enjoying her “lifetime achievement award” last weekend stands in stark contrast to the earnest, reserved 25-year-old who ascended the throne 60 years ago. Then, formality was hard-wired into royal breeding: “I have been trained since childhood never to show emotion in public,” Princess Elizabeth remarked to a dinner companion before her accession to the throne in 1952.

In her biography Elizabeth the Queen: The Life of a Modern Monarch, Sally Bedell Smith tells the story of the future queen being criticized by the Canadian press during her 1951 cross-country tour for her infrequent and tentative smiles. “My face is aching with smiling,” the princess reportedly griped to an aide after hearing the complaint. “I am not a Hollywood movie star and I do not propose to act like one.”

Being queen, of course, was not a destiny she chose for herself. She reportedly prayed for a baby brother when she was a young girl. Nor did a shy temperament equip her for the role. But in the absence of choice, only will remains. And the Queen’s will is formidable, as first glimpsed during a much-quoted radio address from South Africa in 1947 on her 21st birthday: “It is very simple,” she vowed. “I declare before you that my whole life, whether it be long or short, shall be devoted to your service.”

She couldn’t have known that the terms and conditions of that service would be challenged and shaped by seismic social and political change—revolutions that recalibrated the status of women, upended conventions, and blurred the line between public and private. The occupants of the royal barge told the tale as the Queen chatted amiably with Camilla, duchess of Cornwall, and Catherine, duchess of Cambridge, one a divorcée and adulteress, the other born a commoner.

The monarchy Elizabeth II inherited—a contained universe of red boxes, equerries, aristocratic privilege, automatic royal deference, ceremonial ribbon cuttings and honour-guard inspections—would be encroached upon by a 24-hour news cycle hungry to be fed. Stabs at “modernizing” the palace reframed royal protocol at the Queen’s behest—permitting cameras at events, inviting royal children to be photographed with adults, allowing a documentary about the royal family to be filmed inside Buckingham Palace in 1969, mingling with the masses in the “royal walkabout” introduced in 1970.

Still, behaviour once handled by beheading made headlines and sold records, witnessed by the Sex Pistols’ anarchistic single God Save the Queen prompted by the 1977 Silver Jubilee: in it, royalty was a “fascist regime,” and the Queen “ain’t no human being.”

The two decades Hardman would later refer to as the Queen’s “dismal years” reached a crescendo in the 1990s—amid public marital meltdowns of sundry royals, tabloid exposés involving tampon references and toe-sucking, and a fire ripping through the Queen’s beloved Windsor Castle. Evolving to avoid extinction, the monarch brought in advisers to revamp “the Firm.” Management and finances were overhauled: the royal family started paying taxes and voiced objection to the male primogeniture. In the mid-1990s, the palace adopted a job description for the Queen floated by Sir Antony Jay in his 1992 book Elizabeth R. Jay proposed the Queen should be “head of the nation” as well as “head of state.” The mission statement was posted on the new royal website in 1997, claiming that the sovereign “acts as a focus for national identity, unity and pride.”

Meeting royals became a more informal affair: dress codes were relaxed, bowing and curtsying optional. The Queen broadened her touring schedule to include public schools, factory floors and pubs. In 2002, she dropped a ceremonial puck at a Vancouver Canucks game; in 2010, she donned 3D glasses while touring a Toronto movie studio.

Remaining relevant royally meant not only putting on a good show, but expressing concern and care. “Show us that you care” was one of the angry signs addressed to the Queen in the aftermath of Diana’s death. Cleaving to royal protocol, and refusing to fly the Royal Standard at half-mast, the Queen misread the public temperature—and the requirement that modern royalty provide emotional succor.

Over time, the Queen has adapted, in her own terms, to the confessional age—proclaiming her annus horribilis in a 1992 speech, then sharing her sadness “as a grandmother” after Diana’s death in 1997. That year, she cried in public when the royal yacht Britannia was decommissioned. And last week, the palace released formerly private photographs and film footage of the royal family.

As the monarchy evolved, the Queen remained steadfast to the values of an earlier time, which has been her trump card: “She would never change herself,” Hardman writes. In an era of over-sharing, the Queen has remained enigmatic, near mythic by never submitting to formal interview. Her subjects don’t know her tastes, or what she eats for breakfast. Humanizing details have leaked, though never enough to form a composite picture: she loves her corgis and betting on the ponies; she’s a spot-on mimic; her husband calls her “Sausage.” Howard Morgan, an artist who once painted the Queen’s portrait, is quoted by Bedell Smith saying that the monarch is much different away from the public stage: “Her private side took me totally by surprise,” he said. “She is enormously expressive.”

In 2002—the Golden Jubilee year—the Queen’s popularity began an ascent, propelled by public sympathy after her younger sister Margaret and her mother died within months of one another. More than a million people queued for six kilometres to say goodbye to the perennially popular Queen Mother. By then, the royals had become practised in meting out emotions publicly: Prince Charles spoke on television of his grief over his “darling” grandmother’s death. The Queen met with mourners and appeared on television in a spontaneous gesture to give thanks “for the honour you gave her in death.”

She has lived long enough to see history rewriting her story: her behaviour after Diana’s death, for instance, was recast in a more charitable light in the popular 2006 film The Queen. And she would see her father, King George VI, receive a similarly humanizing makeover in the 2010 movie The King’s Speech.

As economies implode and institutions crumble, the short woman with a helmet of grey curls and pursed lips has remained a trusted constant, the only monarch many Britons know, having gone through 12 British prime ministers and survived Johnny Rotten.

The monarch-subject dynamic is ever-changing. As Bedell Smith puts it: “Now the Queen is as much loved as admired.” That was evident at Windsor Castle in May as Lydia Amito, a 10-year-old Ugandan girl, waited to meet the Queen in a receiving line after singing with her school choir. Overcome with emotion, the girl embraced the Queen in a spontaneous hug and rested her head on her shoulder. Unlike Queen Victoria, Queen Elizabeth II was amused, even touched. As she clearly was last weekend, as public displays of affection for her reached a crescendo. And a Queen who’d devoted a long life to serving her public dutifully could have only one response to it all: to smile back, and to mean it.