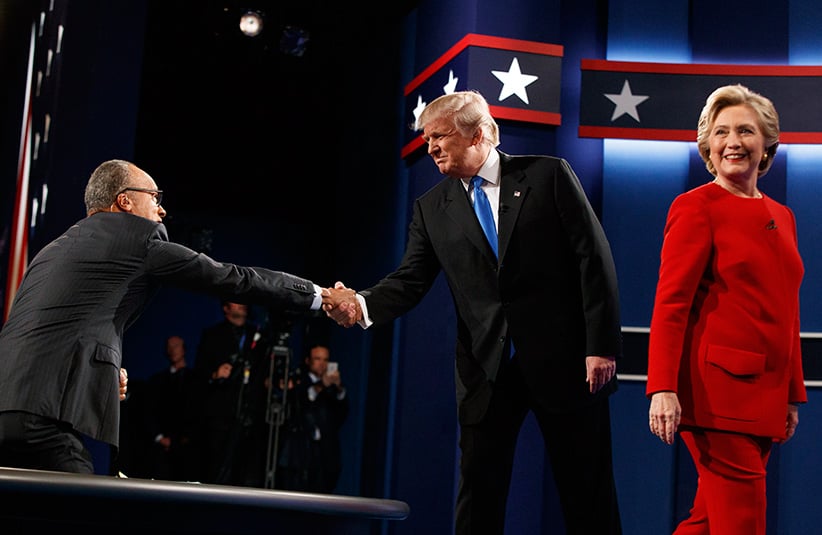 A rollicking Super Bowl of slapstick, smear and slander captivated tens of millions of American voters Monday night, bringing Hillary Clinton and Donald Trump together on a college campus for the first of three debates and destroying any hope of restoring civility as the presidential campaign cascades toward the Nov. 8 election.

Speaking and shrieking to, over, and past each other at Hofstra University—while trampling the overwhelmed, plaintive moderator who tried to keep their gargantuan egos in check—Trump and Clinton spent a full 100 minutes ignoring the rules, smudging the facts, and delivering insults and innuendos that will live for decades in the encyclopedias of political mudslinging.

Two debates in October remain on the schedule, even though early voting has already begun in many states. Opinion polls showed the race in a statistical tie going into Monday’s confrontation, with both candidates rated as dislikable and untrustworthy by the largest majorities ever recorded.

“I think my strongest asset by far may be my temperament—I know how to win,” Trump asserted, but the opposite was clear to everyone in the hall and outside it. Blasphemed by the former Secretary of State for “a long record of engaging in racist behavior,” and stabbed with the accusation that “maybe he’s not as rich as he says he is; maybe he’s not as charitable as he seems to be,” Trump took the bait, frothing in the style that has enraptured his base constituency while infuriating Democrats and millions of Republicans as well.

The exchanges were pungent and delightfully un-presidential:

Clinton: “Donald, I know you live in your own reality.”

“You’re telling the enemy all you want to do.”

“No wonder you’ve been attacking ISIS all your adult life.”

“I have a feeling by the end of this evening I’ve going to be blamed for everything that’s ever happened.”

Admonished by university officials that “No clapping, no cheering, and no booing” would be tolerated in the auditorium, a thousand students chosen by lottery were unable to contain themselves, erupting in hoots and laughter at the most salacious moments, such as when Clinton informed the real estate tycoon that she had “met a lot of people who were stiffed by you and your businesses.”

Pressed on his obstinate refusal to release his income tax returns, Trump at one point reverted to his fluency in classical Latin and offered “Quid pro quo—I will release them as soon as she releases the 33,000 emails.”

It took Clinton less than 30 seconds to remind the audience of her status as the grandmother of a two-year-old, and she did offer a smile at the outset and a “Donald, it’s good to be with you.” But within minutes, the two candidates were hurling their standard stump speeches into the collegiate ether, with Trump thundering that the Obama-Clinton cartel has been “using our country as a piggy bank to rebuild China,” and Clinton reiterating Trump’s long affirmation of what she called “the whole racist birther lie.”

“When you try to act holier than thou, it doesn’t work,” Trump sneered in reply.

If, as predicted, 100 million Americans actually tuned in to an intercourse that had been hyped as “The Debate of the Century”—with five-sixths of the century yet to play out—it would mean that 220 million did not. There was some substance amid the imprecations—on job creation, the national debt, urban policing, NATO and the Trans-Pacific Partnership—but there was no mention of Trump’s beautiful wall on the U.S.-Mexican border, no discussion of a ban on Muslim immigrants and not a single allusion to the sexual history of Clinton’s husband.

Still, appearing in the so-called spin room after the debate, Trump said he was tempted to bring up Bill Clinton’s scandals. He decided not to “out of respect for Chelsea,” the Clintons’ daughter who was in the audience. “I just didn’t want to say what I was going to say.”