It had less to do with gender and more with the fact that Clinton was a terrifically flawed candidate who failed to inspire voters. 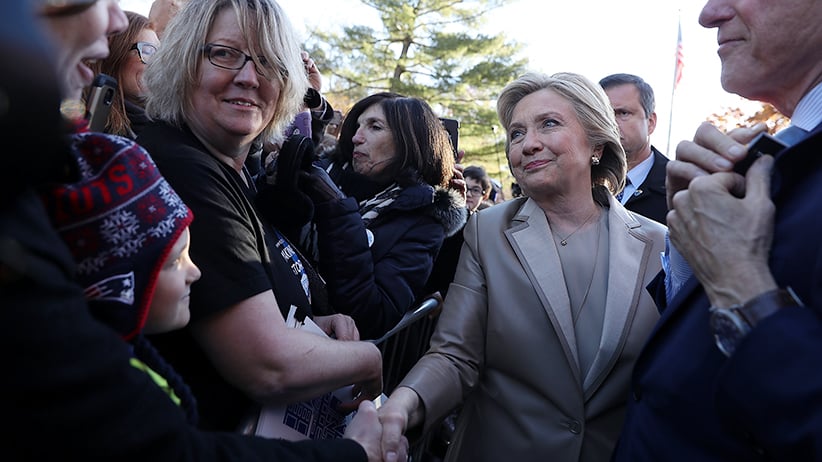 Democratic presidential nominee former Secretary of State Hillary Clinton greets supporters after voting at Douglas Grafflin Elementary School on November 8, 2016 in Chappaqua, New York. Hillary Clinton cast her ballot in the presidential election as the rest of America goes to the polls to decide between her and Republican presidential candidate Donald Trump. (Justin Sullivan/Getty Images)

On Tuesday night I wrote a column in preparation for Hillary Clinton’s inevitable win. “As a presidential candidate, Hillary Clinton is terrifically flawed. Her penchant for secrecy is a conspiracy theorist’s dream. Her weathervane-like shifts on key policies are exceeded only by her tendency to say one thing in public and quite another when speechifying to Wall Street types. Her more than 40 years in the public eye is catnip for opposition researchers and conservative pundits alike,” I wrote.

You know how the rest of the column was supposed to go. Clinton’s flush, formidable campaign had the ground game and the surrogates, not to mention the sheer mother-loving virtue, to counter her own flaws and prevail over Donald Trump. At least 300 electoral college votes, probably more. A run of the mill drubbing of the nouveau riche monster from Queens. I’ll be in bed by 10.

Spun from polls and amplified in the echo chamber of the Twittersphere, the narcotic mix of accepted wisdom and wishful thinking was addictive indeed. And the hangover has been painful.

In the wake of Trump’s win, large segments of the Twittersphere and the even larger orbit of Facebook remain repositories of accepted wisdom. The message is this: Americans voted for a sexist, racist, misogynist because America itself is sexist, racist and misogynist. Forget her email server; Hillary’s biggest mistake was thinking that a woman could even dream of being president of such a cesspool.

A man with her credentials would have been a shoo-in, so the theory goes. As a woman, her myriad accomplishments became millstones around her neck, because ultimately America can’t accept her gender in the Oval Office.

It’s yet more wishful thinking, and it’s why the reasons behind Clinton’s loss lie well beyond the mouths of pundits and the cheap invective of social media. Clinton didn’t lose because she’s a woman, any more than Trump won because he’s a man. She lost because many voters—be they white, black, female, male, young, old—saw what most of us in the media didn’t: she was a terrible candidate, and they voted (or didn’t vote) accordingly.

FROM ANNE KINGSTON: Clinton’s qualifications were no match for sexism

Women, especially, seemed to have realized as much. The accepted wisdom had female voters flocking to Clinton because of Trump’s many sexist transgressions over the years. But according to exit poll data collected by Edison Research for the National Election Pool, Clinton’s support from women in 2016 was roughly the same as it was for Barack Obama in 2012. Trump has targeted white women almost exclusively throughout his years as a privileged sexual predator. Despite this, 52 per cent of white women voted for him—about the same percentage that voted for John McCain in 2008.

The accepted wisdom had a mass migration of Hispanics and blacks into Clinton’s camp. Yet Trump had roughly the same support amongst both demographics as in 2012—when, it should be noted, Republican candidate Mitt Romney didn’t refer to Mexicans as rapists and black neighbourhoods as being more dangerous than Afghanistan.

Until Tuesday night, the state of Pennsylvania had been a Democratic bedrock since 1992. Neighbouring Wisconsin, meanwhile, has gone Democratic for 24 years. In 2008 and 2012, both states voted overwhelmingly for a black man, the central casting boogeyman in the nightmares of so many Trumpian trolls. Yet both shunned Clinton this time around. The left would have you believe it’s because she is a she. Maybe voters in Wisconsin and Pennsylvania simply realized that she’s just a terrible candidate.

Certainly, the warning signs were there. In 2007, Clinton had the Democratic nomination all lined up, only to lose to a certain junior senator from Illinois. In 2016, she needed much of the Democratic National Congress in her pantsuit pocket so as to stave off a similar upset by Bernie Sanders. In between, she spearheaded further rapprochement between Wall Street and the Democratic Party. She gave dozens of $250,000 speeches. She became, in other words, a caricature of the political establishment waiting to happen. Gender had a lot less to do with Clinton’s loss than the accepted wisdom would suggest.

Bad politicians aren’t gender-specific. David Cameron spent years ascending the ranks of Britain’s Conservative Party to become prime minister in 2010—only to let his hubris and Brexit get the better of him. As Canada’s finance minister, Paul Martin was astoundingly effective. As prime minister, he was haughty, hapless and flailing. Clinton is one of the rare female politicians to join their ranks.

Clinton was a bad candidate, above all else. It’s an early silver lining in a disastrous election that enough women figured this out and weren’t compelled into solidarity by their gender.