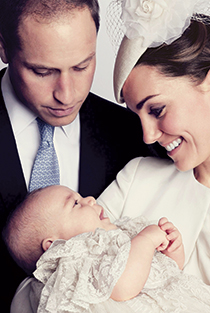 Like a long-running TV series, the British royal family requires an infusion of new characters to keep viewers interested—and dynastic bloodlines flowing. So it isn’t surprising that, following a seven-month ramp-up, the latest addition has been a ratings bonanza.

Given his parents’ intentions to provide as normal a childhood as possible in a fishbowl, it’s likely Prince George won’t get a speaking part for years, if not decades. That doesn’t mean the third in line to the British throne isn’t already following a script. As the first front-line British royal born in the age of Twitter and Instagram, Prince George will be watched, hawk-like, to see how the royals will navigate 21st-century tensions between public and private, tradition and modernity.

Even before his birth, His Royal Highness Prince George Alexander Louis of Cambridge made history as the first future British monarch who won’t be subject to the archaic laws of primogeniture, which see boys supersede girls to the throne, no matter their birth order. Still, there was plenty of tradition: his July 22, 2013, arrival was heralded by a 62-round-salute from the Tower of London. His name, too, bristles with tradition. George, from the Greek georgos, is rooted in royal lore. Young George will grow up at Kensington Palace, running through the same gardens and hiding places his father and uncle played in.

But clues of a new approach are emerging. The prince’s birth was announced via press release from royal officials, before being posted on an easel outside Buckingham Palace. His first visitors were not Windsors but Michael and Carole Middleton, a nod to the role his maternal grandparents will play. As for parenting style, William and Catherine are embracing an approach that will resonate with commoners. The princeling’s public debut came quickly, the day after his birth. Exiting the hospital, there were no royal drivers; Prince William, dressed in jeans, bundled his son into a baby seat in the back of the family Range Rover, making newbie mistakes in the process. Dad took a short paternity leave. Mum made it clear she plans to be “hands-on,” with minimal nanny interference.

Unlike most babies, however, Prince George arrived as an eight-pound, six-ounce commodity, able to sell any product with which he is linked, a gene he inherited from his mother. The first sign of what’s now known as the “Prince George effect” was seen with a sales surge of the $475 “Moses basket” that the duchess of Cambridge was seen lugging around London. Sales of the Aden + Anais cotton swaddle with a bird pattern that wrapped him when he left hospital surged more than 1,000 per cent in the U.K. and 790 per cent in Japan. Knick-knacks from the Royal Collection Trust—$350 memorabilia mugs and $145 teddy bears—are selling briskly. Every milestone in the prince’s short life has become a tourist attraction; VisitBritain is using images of Prince George in ad campaigns to promote the U.K. as a family-friendly holiday destination.

Modulating public and private will be a tightrope. The royal family has provided sound bites of the predictable things said about babies: His father spoke of his “good set of lungs,” his uncle of him “crying his eyes out,” his mother of “what fun” he was. Imagery is being meted out slowly. The first portrait was a study in informality, taken with his parents and the family dog, Lupo, on the Middletons’ lawn by Michael Middleton. A second set of images emerged after the prince’s christening, a small, private ceremony at the Chapel Royal in St. James’s Palace. Per tradition, water was shipped in from the River Jordan; the princeling wore a replica of a gown in the family since 1841. His godparents, however, didn’t include foreign royals. The group of seven were friends, advisers and family, with homage paid to William’s late mother with the inclusion of one of her closest friends.

Photos from the event included four generations of current and future monarchs, the lace-draped baby the clear focal point. A much awaited photograph of just 87-year-old Queen Elizabeth II holding her great-grandchild did not emerge, giving rise to rumours it was being saved for her annual Christmas card. That’s likely. The Windsors have maintained a long run by knowing how to pander to pivotal sweeps period. And now, with a new cast member, they’re not facing cancellation anytime soon.