From 2013: Let’s hear it for Harry, the most huggable Windsor in history. Forget the heir, long live the spare. 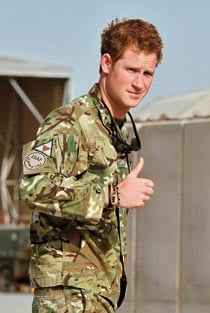 This article was originally published on Feb. 3, 2013

Now that the royal pregnancy is safely under way, let’s turn our attention to the other brother, shall we? I mean Prince Harry, of course—that wonderful, grinning, golden Labrador of a royal—master of the TMZ generation, ruler of all frat brothers, the emperor of strip poker and a bloody good soldier. Let’s hear it for Harry, the most huggable Windsor in history. Forget the heir, long live the spare!

When Harry bounded back into the spotlight recently by giving “his most candid interview ever” to various British TV news outlets—a set of interviews conducted over Christmas and broadcast within minutes of his departure from his second tour of duty in Afghanistan—the whole world jumped up off the collective sofa and danced Gangnam-style. We did this because Harry, like weird Korean pop videos, simply makes us happy. Even in the darkest days of January, under threat of a triple-dip recession, the sight of his freckle-faced grin and strawberry-blond brush cut, gives the British public (and its Commonwealth brethren) the will to live another winter.

Not since a baby hedgehog was found in a bag of chips last fall has there been a more delightful British news event. Here, finally, was our chance to watch Harry joking around with his army buddies, playing video games and chatting cheerfully about his in-flight urinary habits (he gave an in-depth description of his “amazing piss bag”). He was relaxed and funny, seemingly unafraid to go off script when it suited him. When asked if his brother, William, also a helicopter pilot, was jealous of his Afghan tour, Harry conceded yes, absolutely. “He’d love to be out here and, to be honest, I don’t see why he couldn’t….We’re not special.”

The military disagrees. Second in line to the throne, Harry’s older brother is perceived as a security risk, and as such, not allowed to serve in a war zone. Indeed, the younger prince’s first mission was cut short for the same reason—after a media blackout fell apart, Harry was forced to return home on short notice. This time, the Palace decided to manage the situation differently, offering the media unprecedented access in exchange for saying little while he was in harm’s way. In the interviews the young royal submits to the scrutiny with jocular aplomb, getting tetchy only once or twice when the subject of the media itself comes up. “I didn’t want you guys here,” he says a bit grumpily at one point. “But a deal was done.”

The only controversial point in the interview is when Harry speaks—somewhat breezily—of killing people. As co-pilot, he is the soldier with his hand on the trigger; his Apache helicopter unit has the highest kill rate in the Afghan conflict. “We fire when we have to,” he said, sitting on the base in his flak jacket, a pair of rainbow-ink kiddie pens poking out of his pocket. “Take a life to save a life. That’s what we revolve around, I suppose. If there’s people trying to do bad stuff to our guys, then we’ll take them out of the game.”

He went on to say he’d rather be out in one of the remote patrol bases than in the Army Air Corps base camp since everyone there “has a good old gawp” every time he enters the cookhouse.

Fair enough. But one unnamed senior military official told the Sunday Telegraph that Harry sounded like “a “spoilt, truculent teenager,” and advised the prince “to wise up and accept that he is not a soldier but an Army officer—he is not ‘one of the boys’ and never will be.”

Much hay was also made of Harry comparing his combat abilities to his video-game proficiency. Zabihullah Mujahi, a Taliban spokesman, said: “To describe the war in Afghanistan as a game demeans anyone, especially a prince, who is supposed to be made of better things.” And if you believe the headlines, many anonymous senior army officers agree.

But should we be shocked by a soldier firing his weapon at the enemy in a warzone? Or a 28-year-old, subjected to intense press scrutiny, mouthing off a little bit when prompted?

Probably not. Just as we shouldn’t have been shocked by Harry’s wild weekend in Vegas a few months back, which occurred before he left for duty. On this subject of that weekend (which culminated in nude photos of the royal being sold to TMZ), Harry was mostly unrepentant, defending his right to privacy, but adding that the incident was probably “too much soldier, not enough prince.”

In truth, it’s Harry-the-lad who has won our collective hearts over the years. Even his love life is fantastically blokey. Unlike his brother William, a balding monogamist who married his university sweetheart after a decade of demure hand-holding on ski holidays, Harry has a preference for ladies that can only be described as “a little bit much.” It’s not just his French-pedicured, on-again-off-again girlfriend Chelsy Davy. His romantic history, as the Sunday Times observed, is “a glittering conveyor belt of peroxide kisses and fake tan. The moment a deb bends over to retrieve a stray hoof pick, Harry honks like the only walrus in a sea of blinking, panting seals.” The British humourist Caitlin Moran recently tweeted a drawing she’d made of “the inside of Prince Harry’s brain”: four pairs of big boobs and a daisy.

Some might think this is a teeny bit cruel, but Harry is a self-admitted simpleton. He has described himself as “absolutely useless” in exams and “an absolute nightmare” academically. He did not attend university but went straight into military service, where he’s thrived ever since like a thirsty linebacker at an all-night kegger. He is in his element and it is impossible not to applaud him for it.

Better yet, Harry doesn’t need to be clever. Barring catastrophe, he will be able to enjoy all the perks of royal life without ever having to place his military gym-conditioned bottom on the throne. He will bumble along pleasantly, doing charity work at veterans’ hospitals, have the occasional booze-related press hiccup (see “Hitler fancy-dress scandal”), marry a girl who’s just a tad too sexy for his clan’s liking, and eventually retire to a country pile with a Ping-Pong table, a Range Rover and a passel of rambunctious blond children called Bitsy and Tibs.

When asked what will come after army life, the prince seemed rather at loose ends, offering only that he will rise when duty calls. He describes his royal role as “something to fall back on.” In other words, he sees his extraordinary position of birth as a dentistry degree or a family shoe shop—something he will return to when the fun of youth and military action finally (and inevitably) draws to a close.

For a young man so deeply invested in being “regular,” Harry’s ability to handle the media is anything but. He’s won us over as no other member of his family has managed to, and he’s done it not with originality, but sweet, unaffected banality. Not with cleverness but clichés: “As I always say, work hard, play hard,” the prince says. And who would begrudge him that?