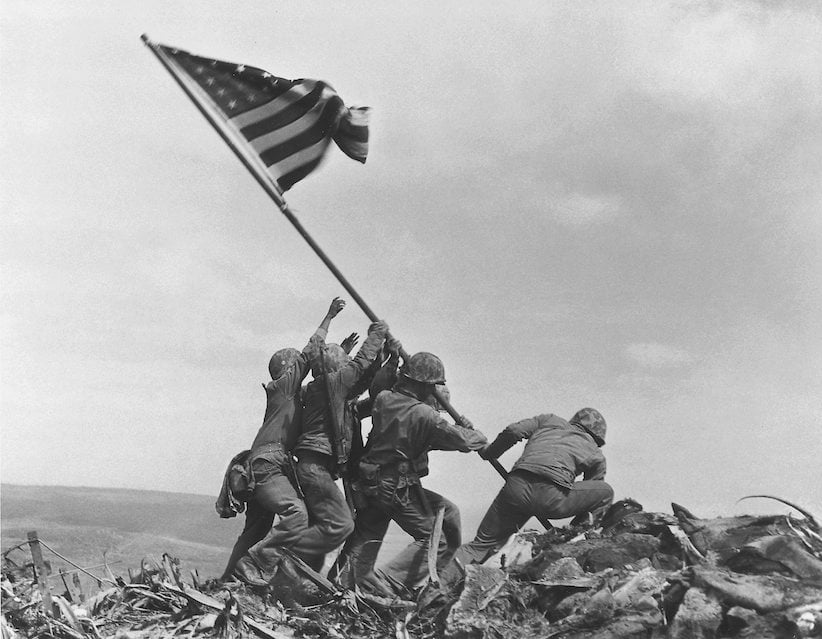 In this Feb 23, 1945 file photo, U.S. Marines of the 28th Regiment, 5th Division, raise the American flag atop Mt. Suribachi, Iwo Jima, Japan. The Marines Corps announced Thursday, June 23, 2016, that one of the six men long identified in the iconic World War II photograph was actually not in the image. (Joe Rosenthal, AP file photo)

DES MOINES, Iowa — One of the six men long identified in an iconic World War II photograph showing the raising of the American flag at Iwo Jima was actually not in the image, the Marine Corps announced Thursday after conducting an investigation prompted by the claims of two amateur historians.

The Marines formed a review panel earlier this year after the two history buffs studied a number of photos shot during two flag-raisings atop Mount Suribachi during an intense battle between American and Japanese forces in 1945. They claimed the identifications made by the Marines of the six men in the famous photo by Associated Press photographer Joe Rosenthal included mistakes, and after the review, the Marines Corps agreed.

“Our history is important to us, and we have a responsibility to ensure it’s right,” Marine Commandant Gen. Robert Neller said in a statement.

A panel found that Private First Class Harold Schultz, of Detroit, was in the photo and that Navy Pharmacist’s Mate 2nd Class John Bradley wasn’t. Bradley had participated in an earlier flag-raising on Mount Suribachi, and his role took on a central role after his son, James Bradley, wrote a bestselling book about the flag raisers, “Flags of Our Fathers,” which was later made into a movie directed by Clint Eastwood.

James Bradley declined to comment Thursday when reached by phone.

The Marines began a review after being contacted by researchers working on a Smithsonian Channel documentary spurred by amateur historians Eric Krelle, of Omaha, Nebraska, and Stephen Foley, of Wexford, Ireland, whose questions about the photo were first reported by the Omaha World-Herald in 2014.

More than 6,500 U.S. servicemen died in the battle at Iwo Jima, a tiny island 660 miles south of Tokyo that was deemed vital to the U.S. war effort because Japanese fighter planes based there were intercepting American bomber planes. The invasion began on Feb. 19, 1945, with about 70,000 Marines battling 18,000 Japanese soldiers for 36 days.

Besides those killed, about 20,000 Americans were wounded. Only about 200 Japanese soldiers were captured, with the others killed in the fighting.

Krelle and Foley compared a number of images shot of an earlier flag-raising and the raising of a second, larger flag captured by Rosenthal. They found discrepancies between what the men were wearing, their weapons and equipment that had, prompting Krelle and Foley to argue that some of the Marines had been misidentified and that Bradley participated in the first flag-raising but not the second effort that made for the famous image.

The Marines now agree that Schultz, who died in 1995 at age 70, helped raise the flag, along with Harlon Block, Rene Gagnon, Ira Hayes, Franklin Sousley and Michael Strank.

Block, Sousley and Strank died at Iwo Jima before the photo was distributed in the U.S.

Neller said it’s important to set the record straight but that the photo was never about the individuals shown in the image.

“Simply stated, our fighting spirit is captured in that frame, and it remains a symbol of the tremendous accomplishments of our Corps — what they did together and what they represent remains most important. That doesn’t change,” Neller said.

Matthew Morgan, a retired Marine lieutenant colonel who helped produce the Smithsonian Channel documentary, said he’s thankful people can finally learn of Schultz’s role on Mount Suribachi. Schultz, who was wounded at Iwo Jima, moved to Los Angeles and worked for the post office after the war, apparently never mentioning his part in the flag-raising.

“The men most worthy of honour are those who don’t seek it, and Harold epitomizes that,” Morgan said.