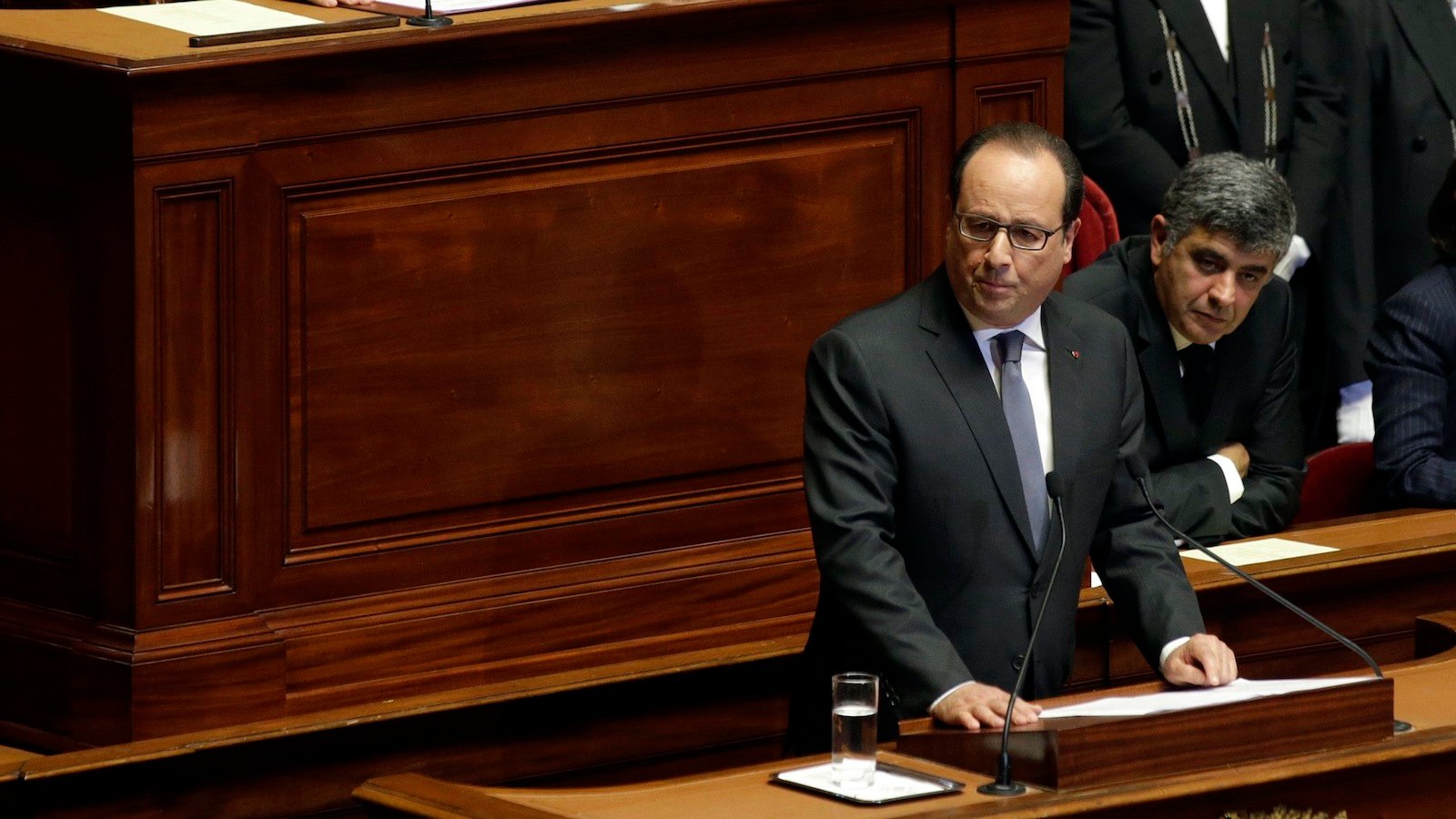 PARIS — French President François Hollande  appeared to give his blessing to Canada’s proposed withdrawal of its fighter jets from the bombing campaign against Islamic militants after meeting Prime Minister Justin Trudeau on Sunday at the Elysee Palace.

The fight against the Islamic State in Syria and the Levant, known variously as ISIL, ISIS and Daesh, has taken on new urgency in France after terrorists claiming to be inspired by the movement killed 130 people earlier this month in Paris in seven co-ordinated attacks.

Hollande has been travelling the world drumming up support for a massive military response, including more air strikes by more countries, at exactly the same time Trudeau’s government says it will remove Canada’s six CF18s from Iraq and Syria and step up military training instead.

The issue threatened to create some turbulence as Trudeau arrived in Paris for the start of UN-sponsored climate negotiations that formally get underway Monday.

It’s a valid question, but Hollande very publicly declined to roil those waters.

Standing at a podium beside Trudeau in the ornate Elysee, Hollande said the two had spoken about the security situation, the battle against radicalism and diplomacy.

“But we also have to act militarily, ” said Hollande, adding Trudeau had affirmed Canada’s solidarity in the global fight and that each country should contribute “within their own means.”

Trudeau, in turn, responded that “we will make sure that we all play a role in order to curb this terrorist threat.”

He told reporters outside the Elysee that Hollande was “very reassured and happy” that Canada is remaining “deeply committed” to the military coalition.

The anti-terrorism front has become inextricably mixed with Trudeau’s foray to the COP21 climate conference.

Trudeau and his wife, Sophie Gregoire-Trudeau, joined a Quebec delegation Sunday morning that visited the Bataclan concert hall, the scene of the worst terrorist carnage on Nov. 13.

On Monday at the climate conference proper, Trudeau has scheduled bilateral meetings with King Abdullah of Jordan and Lebanon’s Prime Minister Tammam Salam, where the issue of Canada’s resettlement of Syrian refugees from Jordanian and Lebanese camps will dominate.

Trudeau also sits down with Benjamin Netanyahu, the hawkish Israeli prime minister, where anti-terrorism and security should also be front and centre, and meets with the heads of the European Union and European Council.

That’s a lot of security-related diplomacy on a day supposed to be dedicated to climate change.

Trudeau said Saturday the shadow of the terrible terrorist attacks has actually made world leaders eager to show up in solidarity at the Paris climate talks, and that he was optimistic of a positive outcome despite the absence of credible emissions-cutting plans to stop global warming. 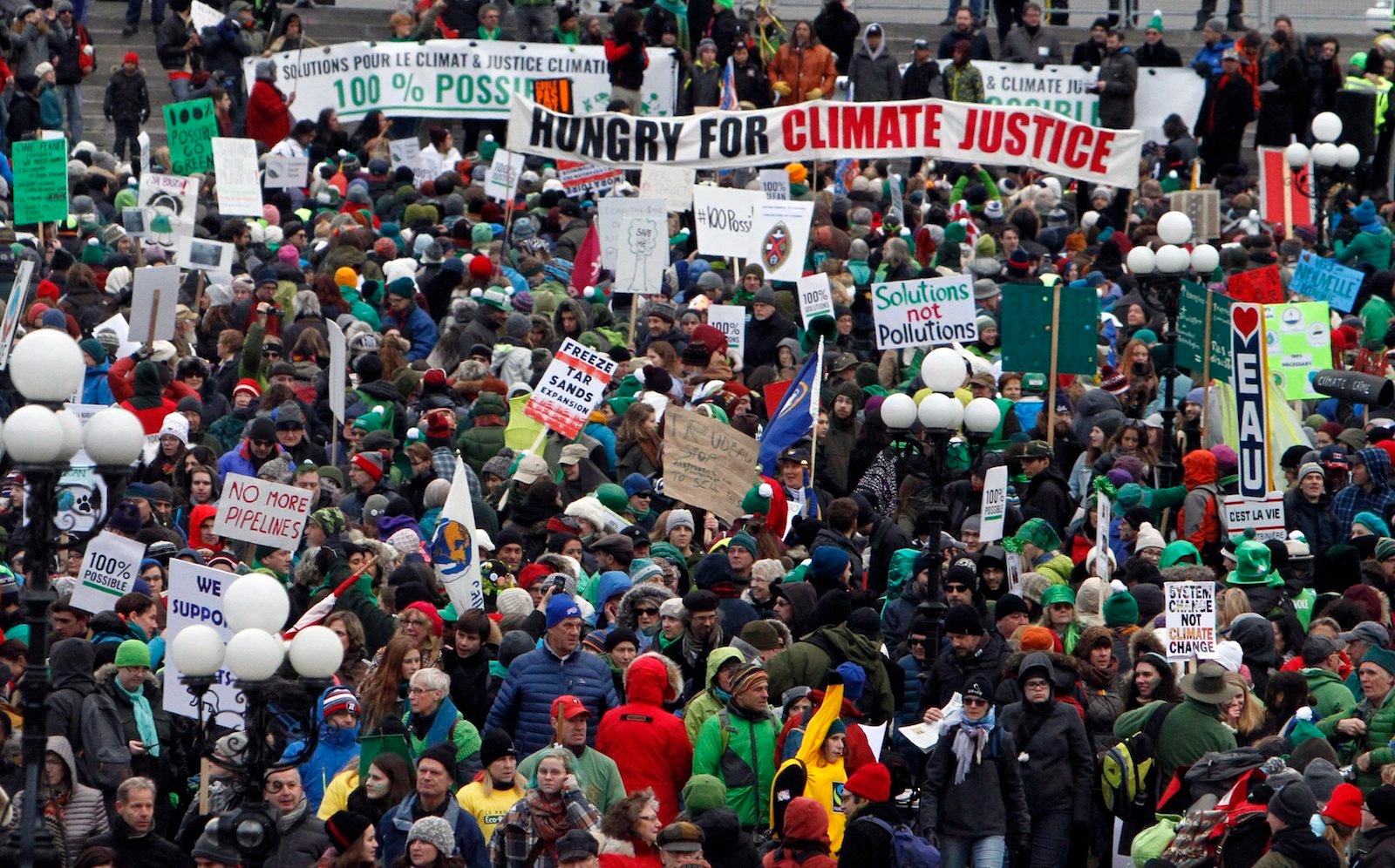 Thousands of people gather for a rally on Parliament Hill, on Sunday, Nov. 29, 2015, in Ottawa. (Fred Chartrand, The Canadian Press)

Some rallies in support of a climate deal were held in Canadian cities on Sunday. In Ottawa, crowds of people — some dressed as fish and polar bears — streamed toward Parliament Hill in an effort to push for effective action on climate change.

Foreign Affairs Minister Stephane Dion and Catherine McKenna, the new Liberal environment and climate change minister, held a news conference Sunday in Paris at the government-run Canada Cultural Centre where the unbridled Canadian optimism briefly foundered on the question of whether a Paris climate deal will be legally binding.

“To be clear, this agreement does have to be legally binding but there may be aspects of it that won’t be legally binding,” including the actual emissions cuts, McKenna said at one point, to howls from reporters.

Steven Guilbeault, a long-time climate science reporter with the group Equiterre who’s been a burr under the saddle of successive Canadian governments, later told reporters that McKenna is correct.

The UN has no power to enforce national emission targets and past enforcement measures failed miserably, he said.

The proposal for legally binding five-year reviews of countries’ climate targets built into a new treaty is gaining traction and could be a key element in any Paris deal. The Liberal government endorses that model.

“It’s such a weird feeling to be in agreement with my government again on things related to climate change,” said Guilbeault, who has been attending international climate conferences for two decades.

“We’re emerging from some dark ages.”