Hollywood versus the real world of hitmen

The assassination of Kim Jong Nam, plus a body of academic research, show how badly movie versions of hitmen miss the mark 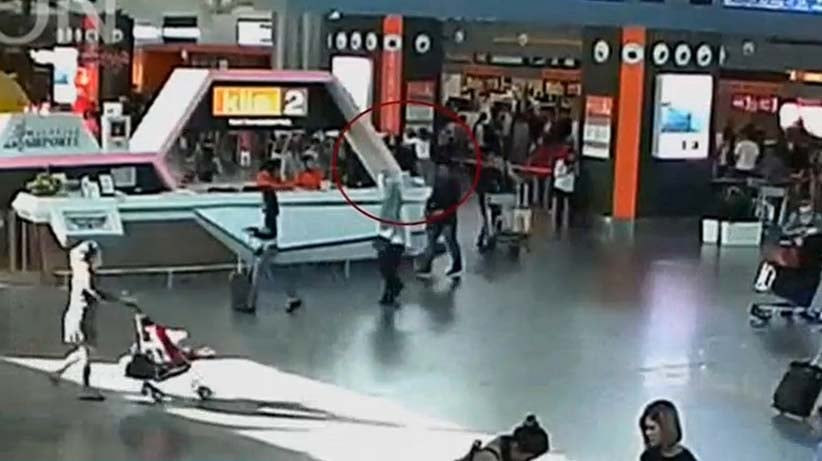 A still image from a CCTV footage appears to show (circled in red) a man purported to be Kim Jong Nam being accosted by a woman in a white shirt at Kuala Lumpur International Airport in Malaysia on February 13, 2017. (FUJITV/Reuters)

If you watch movies, you already know everything there is to know about contract killers.

The professional hitman says little, sees all, demands half-payment upfront and carries a stainless-steel case inside of which is nestled a custom-made, long-range sniper rifle broken down in parts that snap together with a satisfying metallic click-click-click well before the target is in range.

This highly-trained, taciturn angel of death has been a fixture in Hollywood since Alan Ladd burst onto the screen in 1941 in This Gun for Hire, as Raven, a killer so cold-blooded he shot a defenseless woman through a closed door. Ever since, Hollywood has found itself enraptured by hitmen and their body of work. (Mostly dead bodies.)

Even a partial list of hitman movies threatens to consume all available space: Keanu Reeves (John Wick and John Wick: Chapter 2), Tom Cruise (Collateral), Matt Damon (Jason Bourne series), Jack Nicholson (Prizzi’s Honor), John Cusack (Grosse Pointe Blank), Edward Fox (The Day of the Jackal–we’re ignoring the Richard Gere version for obvious reasons), Uma Thurman (Kill Bill, Kill Bill 2), John Travolta and Samuel L. Jackson (Pulp Fiction), Tom Hanks (Road to Perdition), Anne Parillaud and Bridget Fonda (two versions of Nikita), Jean Reno (The Professional), Jason Statham (pretty much every movie he’s ever made) and on and on. And on and on. And on and on.

With the possible exception of astronaut, there’s probably no other job in the world that’s so widely proclaimed and celebrated, but practiced so narrowly and secretively. And astronaut is a perfectly legitimate occupation. So how does Hollywood’s carefully-crafted and endlessly-repeated version of the hitman stand up to real world evidence?

The Kim murder is one of the most shocking and sensational assassinations to be carried out in recent memory. According to Malaysian police, two women snuck up behind Kim as he approached a self-check in kiosk at the airport. One distracted him while the other smeared deadly VX nerve agent on his face. Kim died soon after on the way to hospital.

In custody are Doan Thi Huong of Vietnam and Siti Aisyah of Indonesia. Huong is a 28-year old woman who once studied pharmacology in Hanoi and may have been a contestant on a Vietnamese Pop Idol contest. Aisyah, 25, is a divorced spa masseuse with an active social life who worked in a clothing store. While it’s generally understood assassins seek to blend in with their surroundings, Huong was readily identified by staff at various hotels in Kuala Lumpur because she travelled everywhere with a giant toy bear. “She had this huge stuffed teddy with her,” a hotel employee told the Wall Street Journal.

While the exotic method of death and the uncertain role played by several other male suspects connected to the North Korean embassy and currently being sought by the Malaysia police seem straight out of a Hollywood script, the profile of the alleged killers as two outgoing twenty-something women is at sharp odds with the popularly understood hitman bio. And how to explain the giant stuffed bear?

Such a vast disconnect between the movie version of a professional assassin and the real thing shouldn’t come as a big surprise. A growing body of academic literature on the subject also casts shade on common conceptions of hitmen and their methods.

An Australian study found that just two per cent of all murders between 1989 and 2002 in that country could be categorized as “contract killings.” Payment ranged from $600 to $130,000, with the average about $19,000. The most common motive was “dissolution of a relationship,” followed by money and silencing of witnesses. While there is a long and lamentable record of politically-motivated murder-for-hire in places such as Russia, contract killing in developed countries most often involves local thugs and jilted lovers.

A recent effort to understand the market for contract killing by economist Samuel Cameron of the University of Bradford in Britain concluded that it makes little sense from any conventional economic point of view. “The majority of paid killings take place for very small sums, much lower than the economic value of life and lower too than what one would expect as compensation for efforts and risks of the hiree,” Cameron writes.

In what may be the most comprehensive effort to understand the business of murder-for-hire and its practitioners, a 2014 British investigation scoured 39 years of evidence about hired killers. The authors found hitmen range in age from 15 to 63, with the average being 38-years old. A gun is their weapon of choice. And the most common setting is a suburban streetscape with the target walking a dog or shopping. It also remains a gender-specific occupation. The authors found only one case of a female assassin-for-hire.

The British report proposes four distinct types of contract killers: novices, dilettantes, journeymen and masters. Novices are young, first-time killers often steeped in violent street culture. Dilettantes are generally older and come to the grim business out of dire financial need. Journeymen are local enforcers often well-known to police. Only the final category of master—someone who travels from hit to hit and leaves no local trace—matches the standard Hollywood image of the cool professional killer. It was also the only group for which the authors could find no solid evidence.

“From discussions with our network of informants, it was clear that ‘Masters’ do, indeed, exist,” they write, arguing they often come from military or paramilitary backgrounds. “However, this is impossible to verify with any certainty. These ‘Masters,’ by virtue of evading justice, exist in the shadows—almost like ghosts—and it has therefore been impossible to build up any concrete picture of them.”

The popular image of the ghost-like assassin may thus be real after all. If it is, however, we’re still reliant on Hollywood for the details.