Joshua Wong talks about comparisons to Tiananmen Square, negotiations with government and the emotional toll of protesting 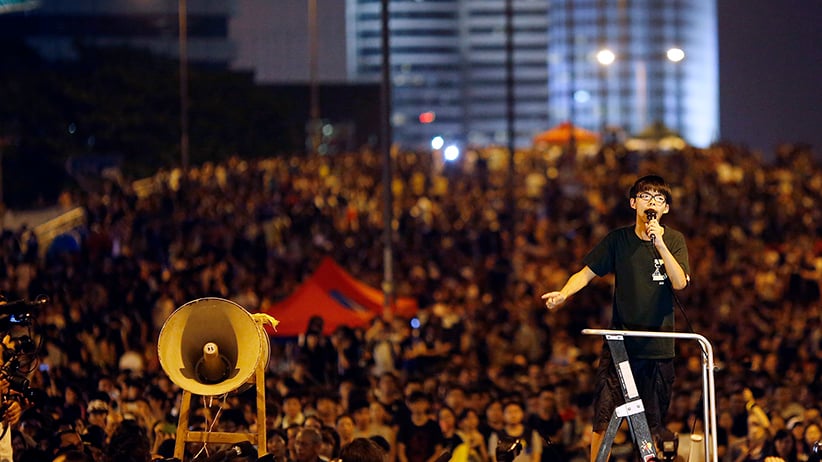 Joshua Wong has emerged as the most vocal and well-recognized member of the thousands of student demonstrators who have faced down the police in Hong Kong over the past five weeks. The 18-year-old de facto spokesperson for the pro-democracy movement is the leader of the Scholarism student activist group. He spoke to Maclean’s by cell phone, from the protest site.

Q: What was the last round of talks like with the government?

A: I’m quite disappointed with the attitude of the government. The government must provide details for a new platform for discussion, and a report to show that they will really be responsible for solving the problem of the political reform. And if they do not disclose these details, or the direction of political reform, I’d say more people will come to join our demonstrations.

Q: What kind of personal toll have the protests taken, especially given all the attention you’ve received?

A: It’s not important whether I become famous or not. The most important issue is how the government can solve this problem and accept our demands for true universal suffrage. We want a new decision for political reform on Hong Kong.

Q: What do your parents think of your involvement in this movement?

A: They give me enough space to choose what I want to do.

Q: Tell us about how you became interested in politics.

A: I got involved in social movements only two or three years ago. I wanted to get involved because of the government’s new Chinese Moral and National education curriculum. I felt that it was meant to encourage too much nationalism.

Q: Are you worried about your safety now?

Q: Really? Even after recent allegations that the government enlisted Triad gang members to attack protestors?

A: I think that Hong Kong still has basic laws to protect people. I’m not worried about violence.

Q: What do you make of suggestions that these demonstrations could lead to a bloody crackdown like the Tiananmen Square massacre?

A: It’s hard to compare, because the main issue in Hong Kong right now is universal suffrage. That  wasn’t the case then in Beijing. The two situations are not the same. The government will not use the army to hurt people, clear the road or stop their actions. It won’t be the same.

A: They cannot bear the political responsibility of killing or hurting the people again. They are afraid of the international consequences.

Q: So if not violence, what do you think will happen next?

A: For now, I think the government will still not respond to our demands, which means that more people will join the Occupy action.

Q: And the long term outcome?

A: I’m still optimistic that we will finally get reform and true suffrage through this movement.

Q: How do you maintain hope? The government has still hardly budged.

A: I believe that we will maintain hope because we are persisting with our goal. When I saw everyone gathering in the streets and opening their umbrellas against the police’s tear gas, that gave me hope.

Q: For you, what is the next step?

A: For now, I’m just going to go home and finally get some sleep.