Image of the Week: Protesters fear a new extradition law would scare off international investors and throw Hong Kong's economy into chaos 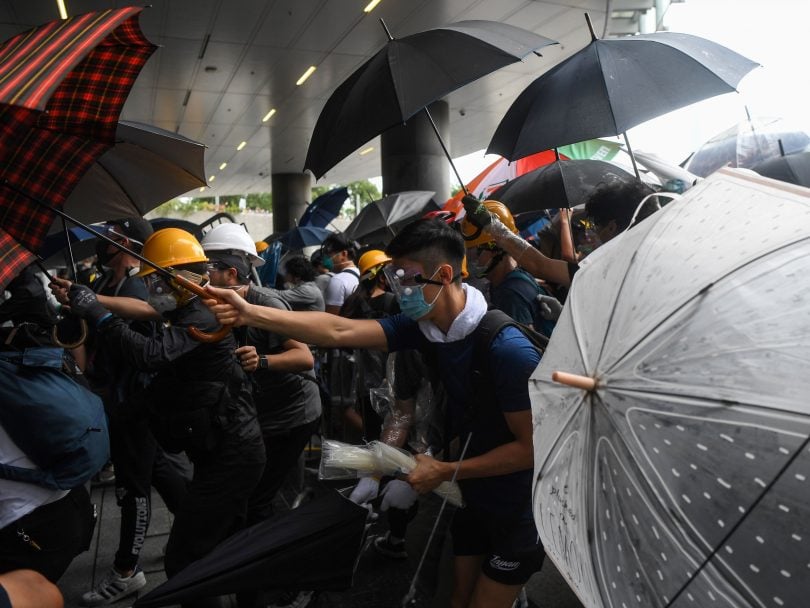 Protesters clash with police during a demonstration outside the Legislative Council Complex in Hong Kong on June 12, 2019. (Anthony Wallace/AFP/Getty Images)

If you ask protest organizers in Hong Kong how many people crowded the streets this week to fight the island’s proposed extradition bill, they’ll tell you it topped a million. Ask police, and they’ll drop that number to 240,000. It’s just one of the core facts neither side agrees on amid the ongoing clash. Police rained down beanbag bullets, tear gas and pepper-spray paintballs, but that hasn’t dissuaded the protesters, who are reviving the spirit of the island’s 2014 “Umbrella Revolution”, and who this week have returned every day since Sunday to fight for what they believe is a pivotal shift in their autonomy from China. The proposed law would allow mainland China to extradite criminals and try them outside of Hong Kong, endangering artists, activists, politicians, intellectuals—but most of all, businesses. Hong Kong can’t afford to scare off international corporations and investors, and if this law takes effect, doomsayers predict an exodus of multinational headquarters to Singapore, or even Chinese cities like Shanghai—if you’re operating at the whim of the Chinese totalitarian government anyway, why not pay cheaper rent? Hong Kong officials have watered down the bill somewhat in the wake of such concerns, removing tax evasion and other white-collar crimes from the list of extraditable offenses. But Chinese courts are not exactly known for their high threshold for burden of proof. A couple of imprisoned Canadians know a thing or two about that. If the government claims a million protesters are actually 240,000, Hong Kong locals would be wise not to argue.

FILED UNDER: Editor's Picks Hong Kong Image of the week