Hospitals around the world are being attacked, report says

And the international community is doing little to stop it 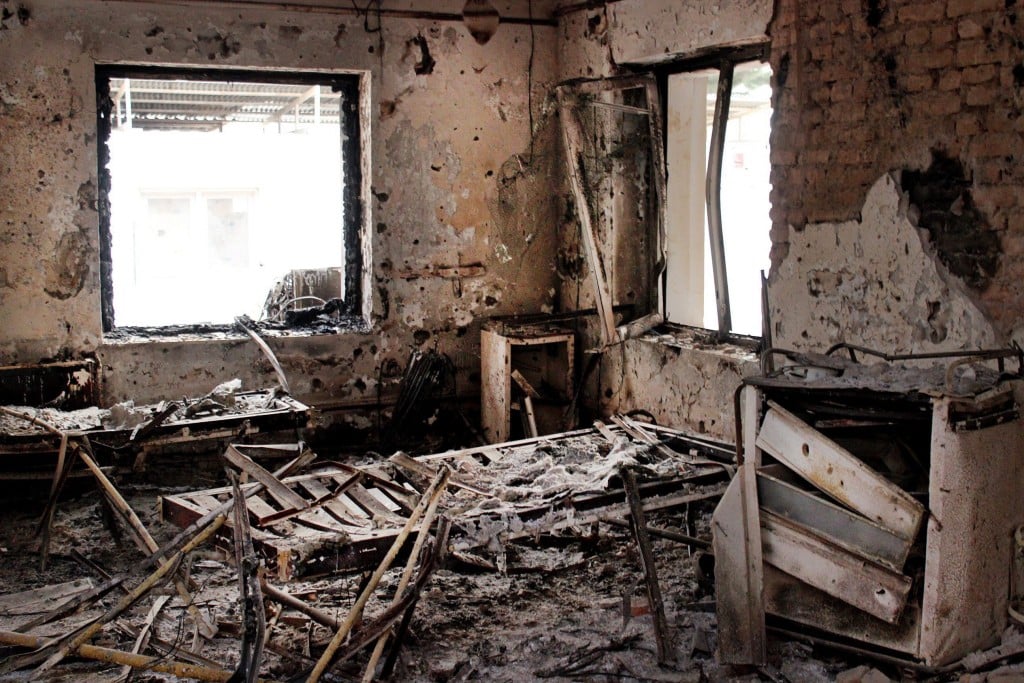 FILE – This Friday, Oct. 16, 2015, file photo shows the charred remains of their hospital after it was hit by a U.S. airstrike in Kunduz, Afghanistan. The U.S. military is paying hundreds of thousands of dollars to wounded survivors and relatives of the 42 Afghans killed when an American AC-130 gunship attacked a hospital run by Doctors Without Borders, which says the sorry money doesnt compensate for the loss of life. (AP Photo/Najim Rahim, File)

Deliberate or indiscriminate attacks have decimated health facilities, killed medical workers and patients, and deprived countless civilians of care in 19 countries during 2015 and the first three months of 2016, a coalition of more than 30 health and humanitarian organizations said in a new report released Monday.

The Safeguarding Health in Conflict Coalition said the attacks took place from Colombia across Africa and the Middle East to Asia, including Pakistan, Myanmar and Thailand.

“The report shows both the pervasiveness and variety of attacks on health facilities, staff and patients globally,” coalition co-chair Leonard Rubenstein of the Johns Hopkins Bloomberg School of Public Health said in a statement. “Sometimes the attacks are deliberate, sometimes they’re a product of indifference to the harms caused, and sometimes they represent gross failures to take steps needed to prevent death and injury – but all violate longstanding obligations under international law.”

The U.N. Security Council earlier this month adopted a resolution condemning attacks on health facilities and health workers and reiterating that under the laws of war hospitals and staff must be protected from attack. It called on all countries to prevent attacks, investigate them and bring the perpetrators to justice.

“Turning hospitals into battlefields is a grave breach of humanitarian law and an affront to humanity,” said Susannah Sirkin of Physicians for Human Rights, a coalition member.

Laura Hoemeke of IntraHealth International, another member, said “the international community’s failure to halt such attacks has sparked a chain reaction of impunity.”

Among its recommendations, the coalition called on U.N. Secretary-General Ban Ki-moon and the World Health Organization to document attacks on health facilities and workers, and urged the Security Council to refer such crimes to the International Criminal Court or other tribunals if countries don’t take action.

Recent attention has focused mainly on the bombing and shelling of hospitals in five countries – Afghanistan, Iraq, Libya, Syria and Yemen. In Syria, the report said, 122 attacks on hospitals were documented in 2015, while in Yemen health facilities were attacked over 100 times.

The coalition’s report also cited extensive damage to medical facilities and deaths to health workers elsewhere in the world.

The coalition said Nigeria’s government has reported that the Muslim extremist group Boko Haram has destroyed 445 health facilities since 2012. During that time, it said six doctors were killed and 152 severely injured.

In Afghanistan, the coalition cited U.N. reports documenting 63 incidents in 2015 where anti-government groups targeted hospitals, clinics and health personnel – “an alarming 47 per cent increase from 2014.” It also singled an attack by Afghan forces on a Swedish-run clinic in Wardak province on Feb. 18 where two patients and a young boy with them were abducted and killed, and the U.S. military attack on a Doctors Without Borders trauma hospital in the city of Kunduz on Oct. 3 where 14 staff and 28 patients and caretakers were killed.

The report cited several instances where medical aid has been obstructed – by the Turkish government which is engaged in military action against Kurdish separatists, by pro-Russian separatists and the Ukrainian government in that country’s volatile east, and by Israel in the Palestinian territories and Jerusalem.

In southern Thailand, the coalition cited a Human Rights Watch report saying at least 10 insurgents stormed Joh Airong Hospital in Narathiwat province on March 13, used it as a stronghold to attack a government security post and tied up a pregnant nurse and destroyed hospital computers and equipment before retreating.

The coalition reported a decrease in attacks in Colombia and Myanmar but noted a reported attack by FARC rebels on a Colombian Navy hospital boat on the Putumayo River in April 2015 and three attacks in Myanmar in 2015 – two on Red Cross convoys and one in which police dragged a sick protester from an ambulance, beat him and destroyed the ambulance.

FILED UNDER: Doctors Without Borders hospitals