A life-sized fibreglass orca was meant to save Astoria, Ore. from their sea lion problem. It didn't work. 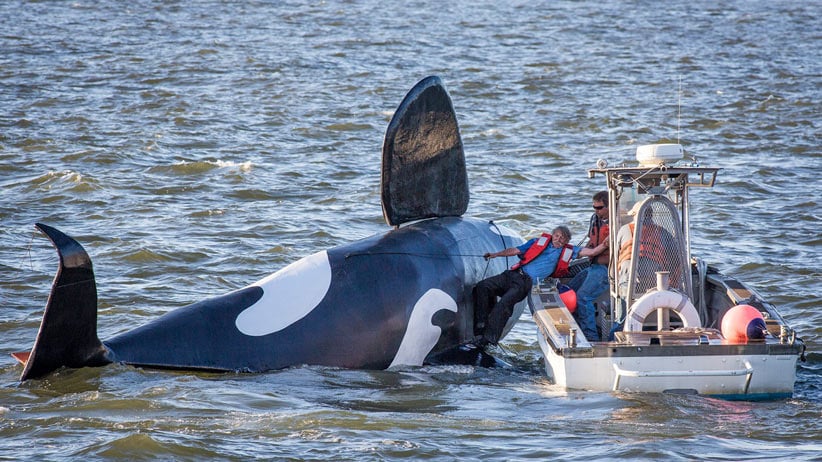 John Wifler, the pilot of the fake fiberglass orca, is pulled from the capsized vessel in the Columbia River outside of the East End Mooring Basin on Thursday, June 4, 2015, in Astoria, Ore. An effort to use a fake orca to scare off hundreds of sea lions crowding docks off the Oregon coast has ended, at least temporarily, with the fiberglass creature belly-up after it was swamped by a passing ship. Joshua Bessex/AP

When Terry Buzzard built a life-sized, 10-m-long fibreglass fake orca that could shoot water out of its blowhole, the idea was to tow it in parades to promote his whale-watching company, Island Mariner. He even built a second eight-foot-long baby orca to accompany it.

Since 1978, the 73-year-old boat captain has offered tours along the waters of his hometown of Bellingham, Wash. (about 100 km south of Vancouver), but, when he heard that the town of Astoria, Ore., about 400 km farther south along the west coast, had a problem with thousands of sea lions taking over the docks at its local port, Buzzard decided to give them a call.

“We know that the natural predator of the sea lions is the orca,” he says, so he offered to haul his fake whales for a day’s drive south in an attempt to scare the sea lions away, “just as a lark.” To his surprise, the Port of Astoria jumped at the offer.

The sea lions have been wreaking havoc on the local fishing industry there. Fisherman have seen the stock of salmon and smelt depleted dramatically due to the sea lions. “And, not only do they eat this stuff, but when the sea lion has had enough to eat, they will actually kill for sport,” says Robert Evert, permit and project manager for the Port of Astoria. The sea lions are also taking a bite out of the port’s bottom line. “I estimated we lose close to $50,000 a year because we can’t rent those slips out,” says Evert.

The population of sea lions, an endangered species, has rebounded significantly since the 1972 Marine Mammal Protection Act, says Brad Hanson, a wildlife biologist with the National Oceanic and Atmospheric Administration. It is still forbidden to hunt, capture or kill them. The docks in Astoria, meanwhile, provide a convenient spot where sea lions can get out of the water, rest and conserve their energy. “They’re territorial. Once they decide they like a particular place, they become very defensive on that site, particularly when there’s food available,” says Hanson.

There is one solution almost guaranteed to keep the sea lions off the docks, which is to build steel railings about 46 cm from the top of the dock, with a panel below it. “The challenge [with that] is the cost,” says Evert, estimating the final bill could end up around $100,000.  A nearby company recommended using electrified mats with a low-voltage charge that wouldn’t hurt the sea lions, but would be enough of an irritant to keep them away. But the sea lions started to lie on the mats willingly. 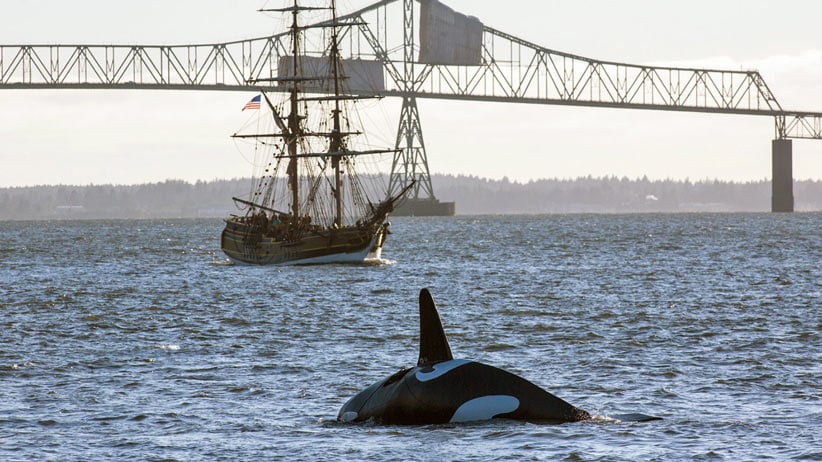 The fake life-sized fiberglass orca passes the Lady Washington as it continues down the Columbia River toward the East End Mooring Basin on Thursday, June 4, 2015 in Astoria, Ore.

One local resident came up with the idea of tying beach balls to the dock. Evert isn’t sure whether it’s the colour of the rotating balls or their unpredictable movement in the wind, but the beach balls had some success: The sea-lion population on the dock dropped from about 2,000 to 1,500.

Evert is not optimistic the beach balls will keep the mammals away for good, ergo, the fake whales. To improve their odds of success, Buzzard’s whales will get some enhancements. Already capable of floating, an outboard motor will allow an employee to drive the whale around the dock. The whales, called Mr. Island and Little Mariner (after Island Mariner), will have improved sound systems so they can converse with each other in “whale talk,” as Buzzard puts it. “It’s not going to be a cheap exercise by the time we get the sound in it and the motor in it and trailer it to Astoria,” he says. “Maybe we’ll get some advertising for our whale-watching business out of it. With that in mind, I’m willing to spend a couple bucks.”

Hanson remembers a problem similar to Astoria’s happening farther south in San Francisco in the late 1980s, when sea lions took over Pier 39. In the aftermath of the 1989 San Francisco earthquake, the sea lions proved to be a tourist attraction. “The restaurant owners were saying, ‘Don’t get rid of the sea lions,’ ” Hanson says. “In San Francisco, they decided to give up and let them have the docks.” Pier 39’s website even has a 24-hour webcam that users can control from home to look at the sea lions.

Back in Astoria, however, the mammals have not proven to be as popular with tourists or locals. “The residents, I’d say within a 20-block radius of the east basin, really don’t appreciate the noise,” says Evert. The same goes with those spending the night in the hotels close to the port. “People want to sleep. They don’t want to be disturbed by barking sea lions 24 hours a day.”

One of Buzzard’s fake orcas were deployed on Thursday. “The only thing I can tell you is I don’t know what I’m doing,” Buzzard said before the launch. “The best-case scenario is the sea lions take a look at it and head for the ocean.” And the worst-case scenario? “They sit and laugh at us,” Buzzard added, “thumb their noses at us as we go by and say, ‘I wonder what those dummies are doing with a plastic whale.’ ”

The worst-case scenario panned out Thursday, only it was even worse than the thousand onlookers could have anticipated. On its first trip into the water, the fake orca’s motor flooded, causing several hours of delay while they installed a replacement. Not long after “Mr. Island” set sail again, it capsized after being swamped by a wave from a passing cargo ship. No injuries were reported, though the captain needed to be rescued.

With the phoney whale now upside-down in the water,  it was towed past the sea lions on its return to shore. The sea lions reportedly got quieter for a brief moment, but none seemed bothered enough to run for their lives.

“They probably think it’s dead now that it’s belly up,” Knight told local media. The fake orca whale may still get another chance on Friday, once it gets dried off.

(This story has been updated from an earlier version.)