Image of the Week: Americans shared joy at the idea of a faithful canine sticking by George H.W. Bush's side—and outrage when the scene got taken apart 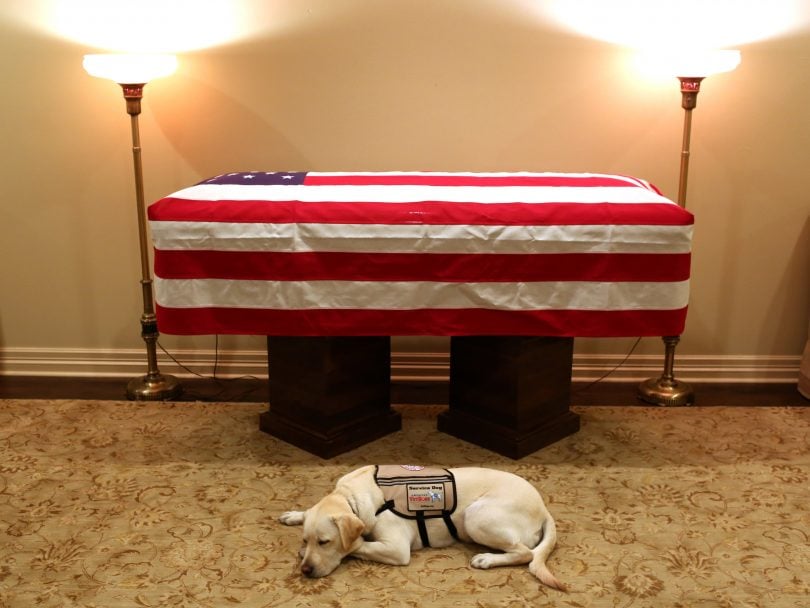 Days after George H. W. Bush died, a photographer snapped this image of the late 41st American president’s service dog lying by his master’s coffin, looking despondent. An avalanche of uplifting tweets and articles immediately flooded social media—even people who resented Bush’s politics seemed to love his dog—and for a brief moment, the most popular story on the Internet created a universally pleasant environment. It didn’t last. Three days after Bush’s passing, Slate reported that, contrary to the real-time mythologizing, the president’s dog was not his “lifelong companion,” but an assigned animal from a publicity-savvy non-profit organization that provides service animals to veterans. When Slate hinted the photo may have been staged, or (gasp) simply an instance of a dog lying down while oblivious to the situation’s emotional weight, the cynicism was met with fury. “I hope the author’s life gets better,” one reader responded, “because life is too beautiful to waste on being an attention-starved ghoul.” On Twitter, the article earned nearly three times as many comments as likes—a deadly ratio. Republicans attacked Slate as pessimistic left-wing trash; Democrats decried the site’s staff as dog-haters. And so emerged the real story of the week: not about a loyal dog, but about the only thing stronger than the ugly schism that has cleaved our world into warring political extremes—humankind’s transcendent thirst for cute animal photos.