How an army of Kurds are winning against Islamic State

The YPG, a ragtag army of Kurds, are taking on—and beating—the world’s most feared jihadists. But is fanaticism the only way to kill fanaticism?

Under any normal circumstances, one might consider Berxedan Deryan a fanatic. The sinewy 32-year-old Iranian Kurd and co-commander of the People’s Defense Units, or YPG, the Kurdish militia in northern Syria, talks like a zealot, exhibits all the features of a person who, in Winston Churchill’s famous definition, “can’t change his mind and won’t change the subject.”

Ask Deryan about family, and he will tell you he doesn’t think about things like that. He’ll say he hasn’t spoken to his parents in more than a year, ever since he left Iran to join his fellow Kurds in Hassakeh, a mixed city of Kurds and Arabs, where the YPG has been fighting pitched battles against the self-styled Islamic State. Mention marriage, and he will give you a shy smile, look at his feet, and mutter something about being married to the “cause.”

Ask him what he plans to do when the fight is won, and he will tilt his head in a curious gesture that seems to say he has no idea what you’re talking about. “I will keep fighting,” he will tell you. “I will sacrifice everything until all of my people are free.”

For now, however, he is pouring all his zeal into freeing Hassakeh. Until recently, much of the city was controlled by regime forces. At the end of June, Islamic State captured some of its southern neighbourhoods and held them for two days before YPG fighters forced them to retreat. The Kurds have since remained in control and now dominate the city.

For them, Hassakeh represents the next stage in the ongoing Kurdish revolution playing out in northern Syria, led by the YPG and driven by a hope sparked by the onset of the Syrian civil war in 2011. Since then, Syria’s Kurds have not only taken control of an expanding strip of land stretching from the Iraqi border in the east—nearly to the Turkish border more than 500 km to the west, with a tantalizing prospect of reaching the Mediterranean Sea—but have also begun to set up their vision for an ideal socialist state in it.

In the process, they have become the most successful fighting force in Syria, emerging as a potent antidote to the spread of Islamic State. Kurdish fighters have seized towns and villages, withstood sieges and brutal assaults, and stood firm in the face of Islamic State’s relentless advances, while others have cowered and fled in fear. 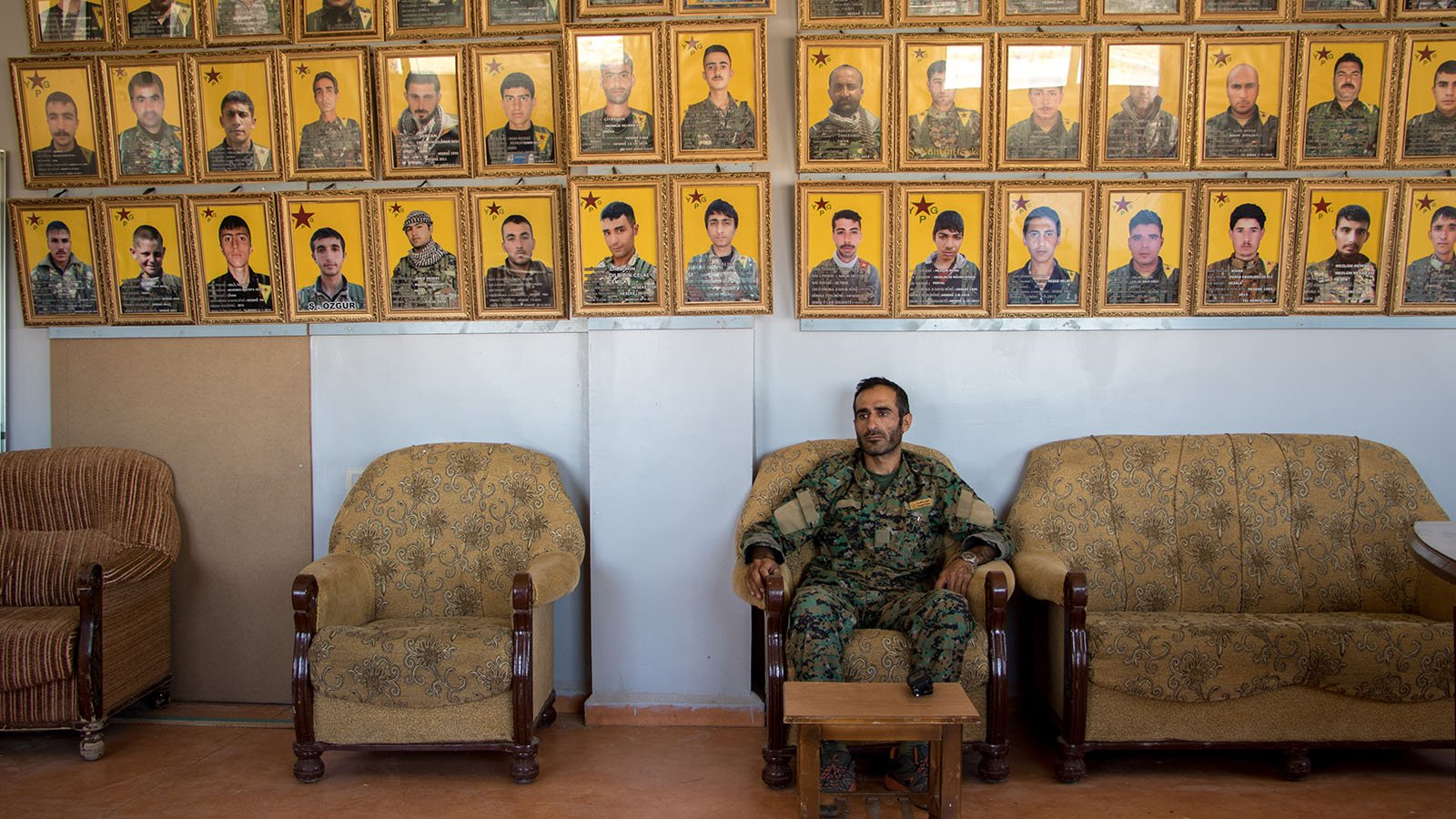 Their successes are telling. The YPG’s unwavering determination is a mirror image of the Islamic State: a group of fighters driven by ideology and a near-fanatical desire to establish a space for themselves, where they can implement a radically new vision for society. It is, in a very real sense, one revolutionary guerrilla force pitted against another. Both are fighting for their own utopias: in the case of Islamic State, an austere Islamist society ruled by a literal interpretation of the Quran; in the case of the YPG, a brand of socialist anarchism, a radical democracy based on the ideas of the American anarchist and libertarian socialist Murray Bookchin.

The visions could not be more diametrically opposed. For Islamic State, women represent a threat to society and should be kept out of sight; for the Kurds, women are an integral part of the sociopolitical order, participating at the highest levels of politics, as well as taking up arms in the revolution. Their all-female militia, the YPJ, strikes fear in the hearts of Islamic State fighters, who believe that, if they are killed by a woman on the battlefield, they will be sent directly to hell.

Many of them have gone down that infernal path. More important, Islamic State appears to have met its match in a movement equally driven by belief.

“Why are we doing so well?” says Abdul Kareem Saruxan, the YPG chief of defence for the Kurdish-controlled al-Jazira province bordering both Turkey and Iraq. “It’s because we are fighting for a cause. We are fighting for an idea and we are willing to die for it.” 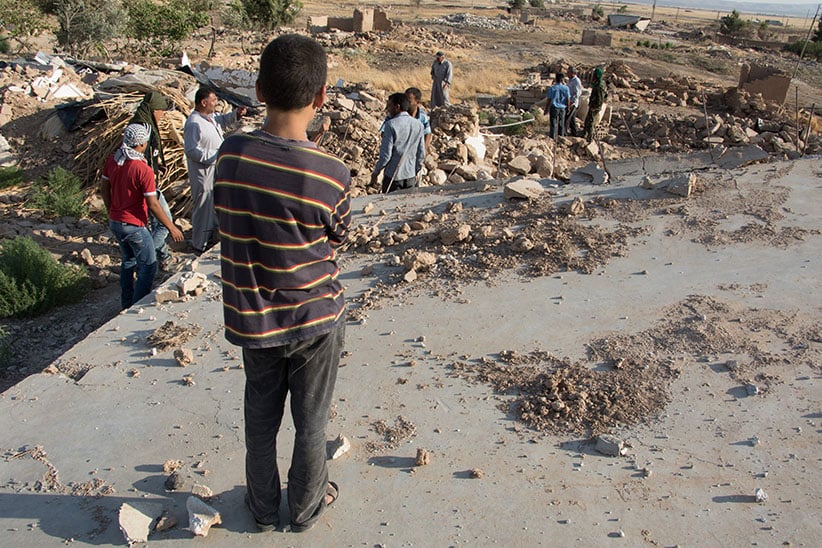 An Arab family near the city of Hassakeh sifts through the wreckage of their home, which locals say was demolished by Islamic State militants. (Photograph by Adnan. R Khan)

Few others have shown that kind of blinkered determination. Sunnis in Iraq appear to have lost the will to fight, stripped as they are of any vision of a prosperous future by an oppressive Shia-led central government. Meanwhile, Syria’s moderate opposition lacks the coherence of any ideological imperative, waffling between Islamist politics and Western liberalism in a desperate attempt to forge viable alliances.

Related: With the fall of Tel Abyad, the tide starts to turn on Islamic State

The Kurds, young, poorly trained and seemingly undisciplined, have made up for what they lack in soldiering prowess with raw courage and battlefield adaptability. In Hassakeh, those traits have proven effective. It’s classic guerrilla warfare, and the Kurds do it well.

“The battle against Da’ish is fluid,” says Sabri Rohalat, a YPG commander perched on the rooftop of a gutted Syrian regime school overlooking the front lines. (He uses Islamic State’s Arabic acronym.) “This is what the regime forces don’t understand. They sit in the areas they control and think they can repel any attack. But they need to be constantly watching Da’ish movements and shifting their own positions to prepare for any surprise attacks.”

He points to a cluster of red-brick homes about a kilometre from the school. “Da’ish uses those houses for cover to mount sniper attacks,” he adds. “We’re keeping an eye on those houses for any movement.”

As if on cue, Rohalat notices something. He pulls out his binoculars for a closer look, an eerie smile spreading across his face, then barks orders into his two-way radio. “Get the Dushka rolling,” he says, referring to the truck-mounted heavy machine gun parked behind the school. “We’re going hunting.” 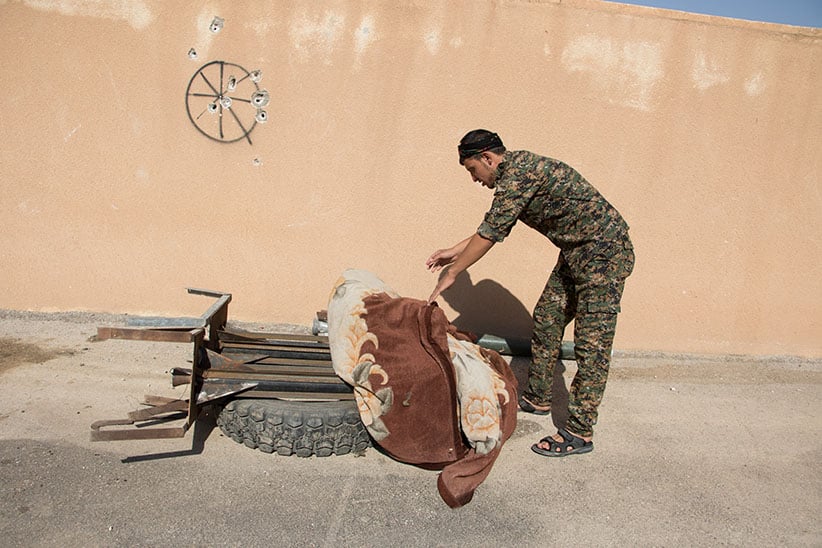 Riding with YPG fighters into battle is a little like a Friday-night bender with troublemaking teenagers. About half a dozen militiamen lounging under a concrete awning in the parking lot of the school drop the watermelons they’re munching and stumble into action, transforming the languid atmosphere into something approaching celebratory. One of the fighters, a short stub of a man barely five feet tall, races around looking for his battered sneakers as the pickup truck carrying the Dushka roars around a corner. The men mount up.

Things become more surreal as the pickup snakes through Hassakeh’s battered streets and approaches YPG positions on the front line, less than 500 m from the cluster of houses. The gunner bounces around expertly on the flatbed while chatting up a friend on his cellphone, one hand resting lightly on the mounted heavy machine gun. Rohalat, riding in the front seat of a trailing car, cocks his AK-47 assault rifle while telling the driver a war story about the time one of his fellow fighters wandered around dazed in the middle of a battle after having his head grazed by an Islamic State sniper. “We were all screaming at him to get down, get down!” he says, setting up his punchline with arms stretched out stiff. “But he was like a robot walking in circles.”

Related: Inside the Syria refugee crisis

Outside, young boys chase after the pickup, flashing the victory sign. Teenagers scream out their desire to tag along so they can spectate, but are rebuffed. The entire scene feels more carnivalesque than military, and the attack itself plays out quickly: The truck backs into a YPG position with a clear line of sight to the houses where the Islamic State fighters were spotted across an empty field; the gunner takes aim and fires six or seven rounds at the houses; the fighters race into a concrete building that the YPG is using as an observation post, with holes cut into the walls, and fire a volley of rounds. And then it is over. There is no return fire.

“Da’ish has a difficult time firing back,” Rohalat says. “If they do, they give away their positions and we can call in coalition airplanes. They need to do surprise attacks, then move quickly before the bombers arrive.”

On the front lines, it’s easy to see why: The open terrain provides little cover for Islamic State fighters. The threat of aerial attacks has evened the battlefield for the YPG, rendering Islamic State’s superior numbers and weaponry useless, including tanks captured from Iraqi and Syrian military bases. 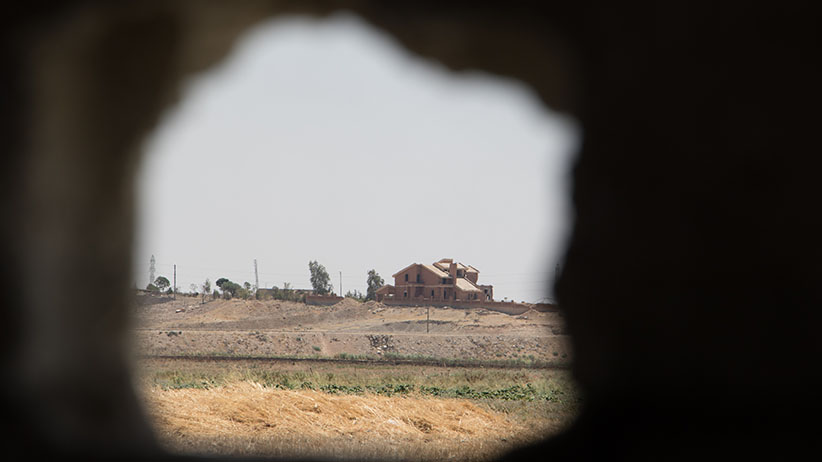 Islamic State positions seen from the Kurdish-controlled side of the front line in Hassakeh. (Photograph by Adnan R. Khan)

YPG commanders are coy about the degree to which they are coordinating with the coalition, but local sources with knowledge of the militia’s operations say they are in constant contact with their international partners, spotting Islamic State targets and relaying the militants’ troop movements.

The coordination has paid dividends: In recent weeks, coalition air strikes have concentrated on targets in and around Hassakeh, although Canadian warplanes appear to be restricting their sorties to Iraq, despite the Harper government’s promise to expand their involvement into Syria.

The Kurds would welcome any additional help. “The bombing is making a huge difference for us,” says Rohalat. “If I had my way, there would bombs dropping every five minutes.”

Related: A bureaucracy of terror: Life under Islamic State rule

That combination—a motivated fighting force backed up by aerial support—is causing havoc for Islamic State in Hassakeh. The victories here, however, will not be enough to completely wipe out Islamic State. The YPG, despite its visceral hatred of the jihadists, has no interest in expanding its fight beyond what it considers the historical homeland for the Kurds.

But similar success stories are beginning to emerge in Iraq, where Shia militias are taking the fight to Islamic State in al-Anbar province, supported by coalition air strikes. The Shia, like the Kurds, also display a revolutionary verve, driven by the overarching shift in the Shia-Sunni balance of power playing out in the broader Middle East. This is the common thread in the fight against Islamic State: The most successful of the myriad forces arrayed against them are the most fanatical revolutionaries.

This is also the danger, however: Revolutionaries don’t have a very good track record of sharing power once they acquire it.

After the victory, then what?