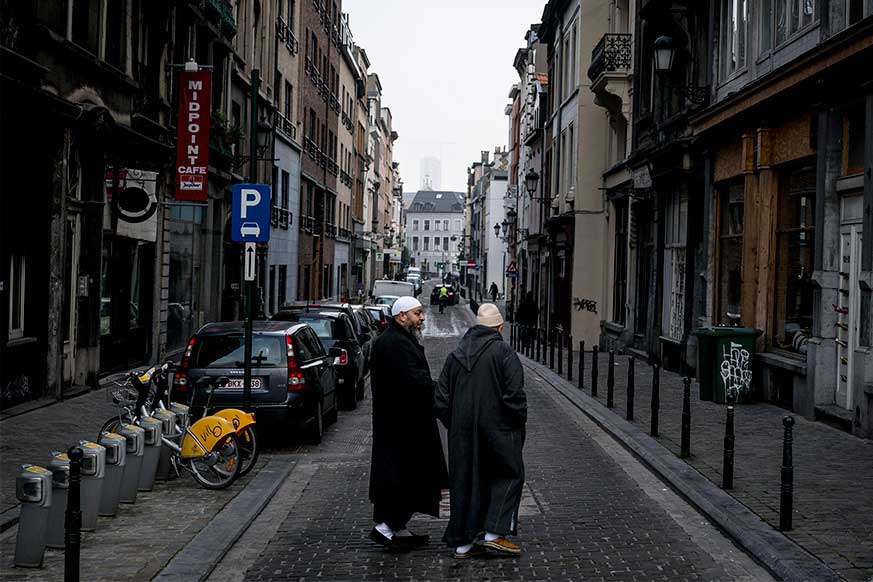 The predominantly Muslim district of Molenbeek in Brussels is like a separate city state, spread across six square kilometres, and with a population of close to 100,000, it is nearly twice as dense as the average Brussels neighbourhood. Twenty-four hours after the recent terrorist attack in which at least 35 people were killed, the area is bustling where other parts of Brussels are deserted. Groups of young men hang around on the street and shoppers go about their business.

As I stand around talking with locals about the bombing, a car full of young men slows down and begins to shout at us angrily in Arabic. When I ask my companion, a 45-year-old Belgian-Moroccan father of two named Samir Benelcaid, what his friends are saying, he shrugs irritably and says he’s never met them before. “They think I shouldn’t talk to the press,” he says. “Because they think you are Islamophobic and will twist everything we say.”

It’s a common sentiment in this increasingly divided country, in which roughly six per cent of the population is Muslim and youth unemployment is at a staggering 22 per cent. After the arrest of Salah Abdeslam, one of the suspected Paris attackers, on this very street earlier this month, Belgian police clashed with locals who were angry that one of their own had been apprehended. In the days since the Brussels attacks, Belgium has been widely characterized as the weak link in Europe when it comes to cracking down on terror networks. Illegal gun running is a serious issue here—the Charlie Hebdo attackers obtained their weapons in Brussels. And according to the International Centre for the Study of Radicalisation and Political Violence, more Belgians have gone to fight for Islamic State than any other European country, per capita. About 470 Belgians have left to fight in Syria and Iraq.

How is it that a country known for its beer, chocolate and bureaucracy could end up being the European hotbed of radicalization and extremism? For one, Belgium is a small but extremely diverse country, smack in the middle of Europe’s Schengen area, where passport-free travel is permitted. It borders France, Luxembourg, Germany and the Netherlands, and has three official languages, French, Dutch and German, as well as several other non-official dialects. After the Second World War, Belgium welcomed mass immigration, mostly from North Africa, when the country needed labour for its booming coal and steel industries—now mostly dried up.

In Molenbeek, it’s estimated that 70 per cent of the Muslim population are second-generation immigrants, but experts say this group hasn’t integrated as well as in other European countries, such as the U.K. or Germany. As Benelcaid says, “There is a gap between our community and the rest of European Belgians. We might be born here and grow up here but we are apart. It’s very easy to live in Brussels as a Muslim and never leave Molenbeek.”

Some believe Belgium’s linguistic diversity may be contributing to its problem with extremism. Because most imams in the country are French-speaking, many young Dutch-speaking Muslims have turned to the Internet in recent years for guidance in matters of faith. And it is here, in the realm of social media, that radicalizing forces like ISIS are strongest. For Belgians, a fragmented, highly diverse culture has long been a way of life—but onlookers now argue that this mass of cultural contradiction and general tolerance has created a unlikely safe haven for jihadis. As an editorial in Britain’s conservative Spectator recently complained, “The Belgians believed, as the British security services did before 7/7, that if they allowed Islamism to gestate at home, the terrorists would spare the country that had given them sanctuary. That fallacy now lies on the scrapheap of ideas where it always belonged.”

Adding to Belgium’s security issues is the fact that, as the de facto EU capital, it is populated with institutions that are symbolic of Western world unity. It is Europe’s military and political capital as well as home to NATO and many EU government agencies. This special status makes it more vulnerable to terror threats.

The diversity that made Brussels a perfect EU capital is also what renders it especially vulnerable in terms of security. Belgium has one of the most devolved governments in Europe. The justice system and intelligence services struggle to share information effectively, and the security infrastructure is tiny compared to many other EU countries. Add to that the fragmentation of Brussels, a city with six different police zones across 19 different boroughs.

While multiculturalism and laissez-faire tolerance often work, in this case they have inadvertently created a perfect storm—turning Brussels, and Molenbeek in particular, into Europe’s jihadi HQ.