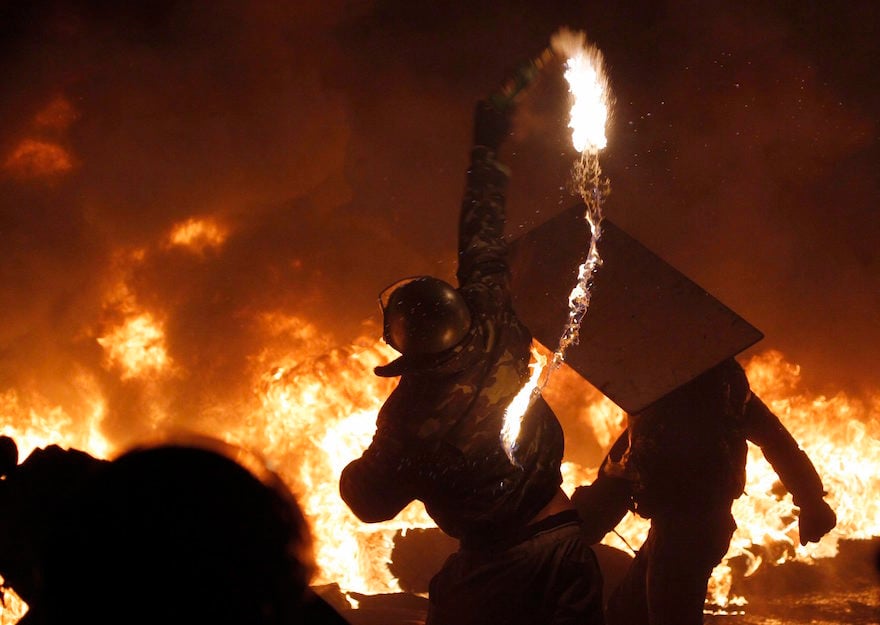 A protester throws a Molotov cocktail during clashes with police in central Kyiv, Ukraine, early Saturday, Jan. 25, 2014. Canada’s embassy in Kyiv was used as a haven for several days by anti-government protesters during the revolution that toppled the regime of former president Viktor Yanukovych. THE CANADIAN PRESS/AP Photo/Sergei Grits

KYIV, Ukraine – It was one of those events that simply appeared and disappeared during the bloody, swift-moving events of Ukraine in the winter revolution of 2014.

Canada’s embassy in Kyiv was used as a haven for several days by anti-government protesters during the uprising that toppled the regime of former president Viktor Yanukovych.

The Harper government never fully acknowledged — during the upheaval or since — the depth and extent of the security breach, which has had far-reaching implications on how Canadians are perceived in the region.

The Canadian Press has spent months piecing together the events surrounding the extraordinary incident, which started on Feb. 18, 2014 and occurred at the height of the violent crackdown against pro-European protesters.

Armed with stones, left behind flowers

It began, according to multiple sources in Kyiv and Ottawa, when one of the protesters being chased by riot police waved a Canadian passport at embassy security. Once the door was open, the individual was quickly followed by other demonstrators armed with sticks and paving stones.

Roman Waschuk, the current Canadian ambassador in Kyiv, confirmed the account in a recent interview with The Canadian Press.

“I understand there was a Canadian passport holder associated in some way with the group,” said Waschuk, who replaced Troy Lulashnyk as ambassador in Kyiv last year.

He acknowledged the protesters were camped in the main lobby for at least a week, which is something neither Foreign Affairs nor the Harper government has ever publicly stated.

Waschek also suggested no harm came of it.

“From what I was told, it was several days and they left flowers on departure,” he said.

A host of security improvements were made in the aftermath, but that opening of the doors was “a gesture designed to react and to reach out to the people suffering in the turmoil,” Waschek said.

But some of Canada’s European allies, speaking on background because of the sensitivity of the subject, said the fact protesters were allowed to stay for so long and operate freely made it appear Canada was an active participant in regime change, and not just lending morale support.

That was certainly the perception of Ukraine’s interior ministry, which oversees the police, national guard and the country’s intelligence services.

Two ministry officials, with knowledge of the case and who agreed to meet as long as their identities were not revealed, said a criminal investigation was opened into the actions of the protesters, but quietly dropped after Yanukovych fled to Russia.

They described an extraordinary scene of chaos and violence outside of the embassy, which is located in the heart of city immediately adjacent to the Maidan — or independence — square.

“There wasn’t much of an obstacle for them to get in. Not much security,” said one official. “Canada was sympathizing with the protesters, at the time, more than the government.”

The lobby was used to treat the wounded on the night of Feb. 18 and they were transferred to hospital by ambulance amid the violence, which included a mini-van that was stolen by protesters, according to the officials.

It was later found burned, something Ottawa hasn’t acknowledged, they said.

“There was no public statement from the Canadian side about this, and it’s really interesting what grounds they would use not to say something,” said the second official.

Multiple layers of intrigue surround the occupation, which was first reported by Russian media as an attack on the embassy by pro-Russian groups.

A spokesman for then-foreign affairs minister John Baird acknowledged, on the day itself, that protesters were in the reception area of the building; they had taken “shelter,” and they were “peaceful and have not caused any damage or harm to staff.”

After the initial report, there was silence. The embassy was closed and remained so throughout the tumultuous events that culminated with Yanukovych fleeing to Russia on Feb. 22.

How the protesters got in and what happened during their stay was never fully explained by the Harper government, which — according to sources in Ottawa — was seized with how to respond and what options there might be to end the occupation.

In the end, a decision was made “at the highest levels” to let events play-out.

Strident Canada is no shock to Ukrainians

If you talk to ordinary people here, academics or even Ukraine’s charge d’affaires in Ottawa, the fact Canada pushed the envelope isn’t surprising. They see it as a natural extension of the Harper government’s bullish rhetoric, and in fact something they’ve come to expect.

“Generally speaking in Ukrainian public opinion, as well in the Ukraine government of that time, there was a common understanding that Canadian sympathies are on the side of the protesters, pro-European, pro-democratic,” Marko Shevchenko said in a recent interview with The Canadian Press.

Dominque Arel, a noted expert on Ukraine at the University of Ottawa, agreed and said the perception that Canada was more than a disinterested bystander was formed long before the Maidan protests, which erupted in the fall of 2013, turned violent.

Perhaps reinforcing that rebel image, at least one local embassy staffer was targeted for her attendance at anti-government rallies and online blogging that was critical of Yanukovych.

Inna Tsarkova, who was part of a group called AutoMaidan which carried out mobile protests around Kyiv, had her car torched and she faced traffic violation charges in December 2013. She declined to speak about her experience, but as the local spokeswoman for the embassy her treatment fit with a pattern of official intimidation at the time, which targeted journalists and other high-profile figures.

There is no prohibition on locally-hired embassy staff participating in political movements.

The fallout is rarely discussed, but Canadians are not very popular in some quarters and occasionally loathed by pro-Russian Ukrainians. Arel said he knows of one incident where a Canadian journalist was briefly detained by rebels.

Bob Fowler, a former diplomat and senior foreign policy adviser to three prime ministers, says the Harper government has played a dangerous game and pushed the country’s involvement in Ukraine to the point where Canada has become a disruptive influence for allies who have more at stake in managing the confrontation with nuclear-armed Russia and are trying to keep the conflict from erupting into all-out war.

“We’re not the considered, intelligent players that we used to be,” said Fowler, who as a UN representative survived a kidnapping by al-Qaeda. “We have been all mouth and no brain.”

The embassy incident is a small but perfect snapshot of what Canada’s foreign policy has become, said Fowler.

“I would argue we have very little credibility within NATO. Of course, our friends in NATO aren’t going to say that publicly, but the people within NATO who are relevant to our discussion, they know about Canadian military capabilities. They know about what we could and could not do and they know our posturing is utterly vacuous.”

NDP foreign affairs critic Paul Dewar was shocked by the recounting of events and demanded the RCMP investigate the security breach. He accused the government of covering up the incident and endangering the lives of not only embassy staff, but Canadian citizens in the country.

“Why are we just learning of this now?” asked Dewar. “And what would have happened had the revolution gone the other way and Yanukovych stayed? If things had gone that way not only would our credibility have been undermined but also the safety and security of our staff.”

Waschek says the safety and security for diplomats is a paramount concern, and Canada’s backing of democracy in Ukraine should surprise no one.

“The public stance ministers and the prime minister took during the Maidan events; that Canada stood on the side of those who were protesting for freedom and democracy, and certainly we’ve never made any apologies for that,” the ambassador said.

The wounds of Maidan are still visible throughout the old city, be it weather-worn shrines with pictures of the dead or gaping holes in the square where protesters clawed bricks from the ground to hurl at kevlar-clad security forces.

The annexation of Crimea and the dismemberment of eastern districts have given Ukrainians little time to reflect, said Marko Suprun, of Winnipeg, who worked for the Globe and Mail and was on the streets Kyiv when the shooting was at its height.

Even today, he can point out the precise rooftop perches where special forces snipers fired on protesters. The wounded and dead would be carried, or dragged, off the streets into any shelter, including the nearby Hotel Ukraine, where there white marble floors were smeared with blood.

Those were the kinds of scenes that were unfolding outside of the embassy doors, he said.

“I just had to help. It’s still kind of hard to talk about,” said Suprun, who put down his pen and carried the maimed and dying into the hotel. He has stayed to provide combat first aid training to Ukrainian volunteers and hands out F–kUPutin bracelets as his business cards.

Consideration of the bigger picture becomes less important the closer you get to the ground, he said.

“You could say events are still raw because Crimea was annexed and eastern Ukraine was invaded,” Suprun said. “And as far as I can tell, the only country that has stood side by side with Ukraine has been Canada, even during the Maidan by closing the embassy in Moscow. These are the right things to do. In finding that friendship, you keep finding the strength to move forward.”