How haven't they caught the New York fugitives? A manhunt expert explains.

More than two weeks into the manhunt, tracking experts explain how the convicted killers could have evaded authorities for so long 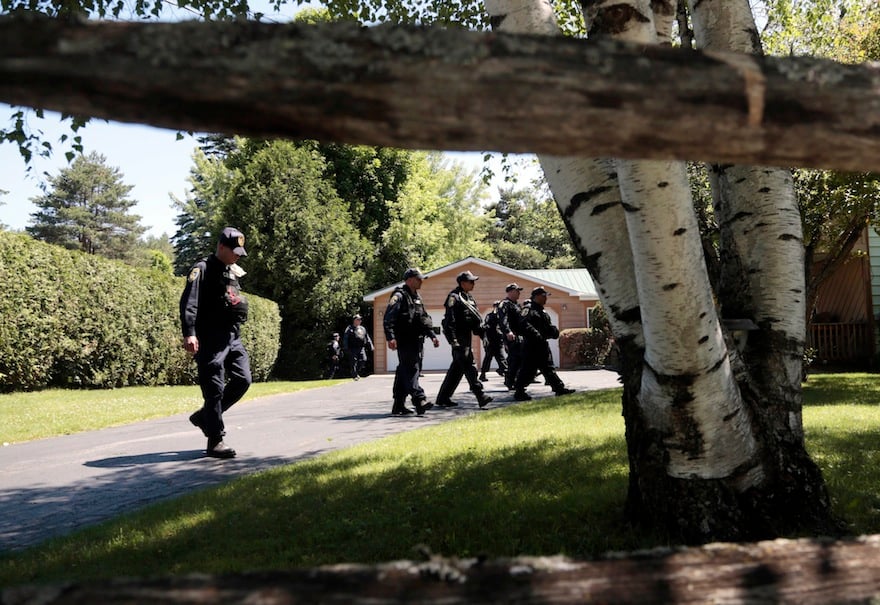 Corrections officers walk through a residential area during a search for two escaped prisoners from Clinton Correctional Facility, on Wednesday, June 24, 2015, in Malone, N.Y. Hundreds of searchers checked ATV trails and logging roads and went door-to-door in far northern New York trying to close in on David Sweat and Richard Matt, who escaped from the maximum-security prison more than two weeks ago. (AP Photo/Mike Groll)

Update (June 28, 2015): David Sweat has been reportedly captured by police. Richard Matt was shot and killed by police on June 26. For the latest on the manhunt, follow our coverage here.

For anyone asking how on Earth two escaped killers could have evaded busloads of police officers and search dogs for nearly three weeks, a buffet of theories are available to choose from. Former U.S. Marshal fugitive-tracker Craig Caine believes David Sweat and Richard Matt could have hopped a train. Or crossed into Canada. Or laid an elaborate series of decoys to throw police off their scent.

The pair escaped on June 6 from the Clinton County Correctional Facility in Dannemora, N.Y. Sweat, 35, was serving a life sentence without parole for killing a sheriff’s deputy, and Matt, 48, was serving a 25-year sentence for the hacksaw murder of a former boss.

“Anything is possible with these guys,” said Caine, based in Massapequa, N.Y., now retired, who believes the pair has help on the outside, just as they allegedly had assistance from prison staff who provided the tools of escape. “You don’t concoct an elaborate escape plan, as they had, without an elaborate evasion plan.”

Hundreds of searchers have swarmed a remote, wooded area of upstate New York ever since evidence, including DNA data, was recovered from a hunting cabin in Black Cat Mountain, more than 45 km west of the prison. According to a New York Post report citing sources, investigators found prison-issue boxer shorts, a bloody sock and the fingerprints of at least one escapee.

The Press-Republican, a local newspaper printed in Plattsburgh, N.Y., reported that the cabin in Black Cat Mountain was leased by several corrections officers. Over the weekend, one discovered a half-drunk jug of water and a jar of peanut butter on the table, just before a figure slipped out the back door.

More than 1,000 officers are now involved in the search, which involves thick, mosquito-infested brush, railway lines, bogs, logging roads, ATV trails and seasonal properties in a 194-sq.-km area near the Canadian border.

“If they’re here, we’re going to find them,” Franklin County Sheriff Frank Mulverhill told reporters this week. Several unconfirmed sightings have been reported so far, including close to the Pennsylvania border, but the killers have evaded authority in brush so thick that sightlines can be as short as a few metres.

How they escaped is clearer. Authorities say they cut through their cells’ steel walls before cutting their way into a steam pipe, and the chain and lock on a manhole cover, before emerging outside the prison. Two prison employees have been arrested: Joyce Mitchell, who is accused of smuggling hacksaw blades and chisels inside frozen meat, and Gene Palmer, who is accused of delivering the meat to the convicts. Mitchell has pleaded not guilty and Palmer’s lawyer has said he did not know the tools were in the meat.

The conditions that make the manhunt difficult also make the convicts’ survival iffy, said Patrick Patten, who runs a woodland tracking school in North Carolina and has hunted for dozens of fugitives. That includes Eric Frein, who was wanted for 48 days for killing two police officers in 2014, and Eric Rudolph, who eventually pleaded guilty to the 1996 Centennial Olympic Park bombing in Atlanta after five years on the run.

“What just about every one of them does is break into cabins,” he said. “If you were to just go into the woods and survive off the land, as people picture it, you’ve really got to be talented: a woodsman, somebody who has done it his entire life, who hunts, traps, fishes—not a couple of guys who have been incarcerated most of their lives. [But] they’re doing something right, because they haven’t been caught.”

While German Shepherds will follow a trail of crushed vegetation, bloodhounds can trace a scent for a month under ideal conditions, said Sid Murray, who runs a canine tracking and training facility near the Canadian side of Niagara Falls. A layer of snow, fierce winds or a torrential downpour could disrupt the scent, and local media have reported heavy rains in the Adirondack Mountains. But, depending on their handlers and training, the only things that would throw the dogs off for certain is if the fugitives hitchhiked or travelled by bicycle, he said.

Finding the recently discarded clothing and other items could reinvigorate the convicts’ trail, Murray said, adding, “if they’re still in the area.”