How Iran could have shot down a passenger jet

Safeguards should have stopped the targeting of an airliner. Tensions, egos and loosened rules could have got in the way. 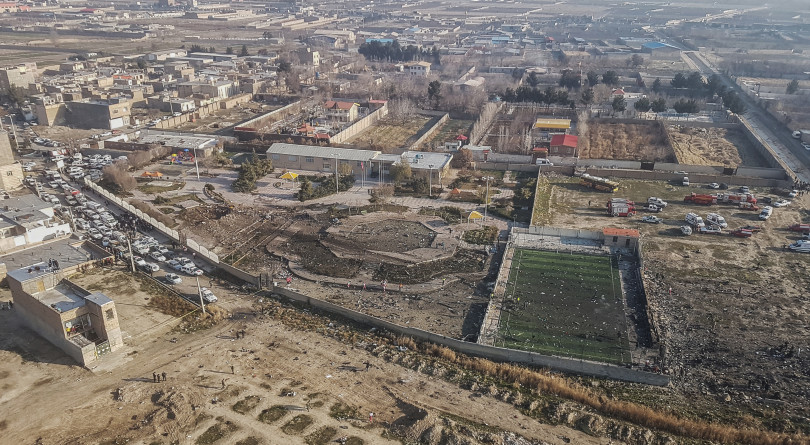 Evidence is mounting that Ukrainian International Airlines flight 752, carrying 176 passengers and crew, including 57* Canadians, was shot down by an Iranian missile. While it’s still too early to say conclusively this is what happened, the possibility is now a probability after the New York Times released a video reportedly showing a missile striking an object in the vicinity of where the Boeing 737-800 was flying.

That video, available here, is hard to refute and comes on the heels of an announcement by Prime Minister Justin Trudeau, echoing earlier American statements, blaming the Iranians for bringing the plane down—”this may well have been unintentional,” he said—citing evidence from multiple intelligence agencies, including Canada’s.

There is  one apparent inconsistency in the New York Times video—between the last known position of the aircraft provided by FlightRadar24, an online aircraft tracking service, and the camera’s angle. But the location of the missile strike is still exactly on the plane’s flight path. It’s unclear why FlightRadar24’s location might be slightly off. The company uses the ADS-B transponder signal every Boeing 737-800 aircraft transmits, the same signal used by air traffic controllers to track the speed, altitude and position of an aircraft at any given moment, among other information. The accuracy of the information and its real-time processing are obviously crucial for preventing collisions.

It could be that FlightRadar24 doesn’t give the exact location of the flights it tracks, or perhaps its website has a delay in its location updates, so the last ping from Flight 752 placed it where it was but then it flew a bit further before it was struck by the missile. The company did not respond to an email request for clarification.

But everything else in the video looks accurate, from the surrounding buildings to the very dramatic moment when the reported missile zooms into the frame and strikes something.

If this was a missile strike, and if it was an accident, the question is how Iranian air defences got it so wrong. Unconfirmed photographs circling around the internet show a missile fragment reportedly found at the crash site that matches the nose section of a missile from the TOR M1 anti-aircraft system. That missile, manufactured by Russia and used by Iran, has an operational range of 12km, meaning it had to have been positioned less than 12km from where it was fired.

Air defences in that part of Iran would be tasked with protecting its capital, Tehran, including Imam Khomeini International Airport, out of which Flight 752 departed, and Mehrabad Airport, 35km to the north, which doubles as an Iranian air force base.

According to Chris Kilford, President of the Victoria Branch of the Canadian International Council and former Commanding Officer of 4th Air Defence Regiment, air defence systems near civilian airports should be set up with “low-level transit routes entered into the on-board fire control computers” and “exclusion zones where civilian aircraft are not permitted”. They would also be programmed to watch for any maneuvers which could be construed as hostile or aggressive.

Flight 752, an almost daily flight from Tehran to the Ukrainian capital, Kiev, was flying along its well-established route, nowhere near any “exclusion zone”. In addition, it was ascending shortly after takeoff, moving away from both Khomeini and Mehrabad airports in an unremarkable procedure that would not even remotely resemble anything “hostile” or “aggressive”.

The structure of the aircraft itself, a Bulgarian military expert told me, is designed so that it would also scream out to radar systems that it is a civilian airliner. “These planes are built to show a prominent radar cross section,” he told me in a Whatsapp phonecall, requesting anonymity. “They are painted with reflective material so they glow brightly on a radar system. Military aircraft have a very different RCS signature.”

All of these safeguards, Kilford said, should have prevented any targeting errors. Under normal rules of engagement, he added, it would take more than one of these “friend or foe” indicators pointing to a foe for the commander of the anti-aircraft system to order a strike.

The early morning hours of Jan. 8, however, were anything but normal. Only hours earlier, the Iranian military had launched 22 ballistic missiles at two bases in Iraq housing U.S. troops, alongside Iraqis and coalition forces, including Canadians. No one was injured, and the strikes appeared to be designed for maximum theatrics, to de-escalate tensions after last week’s assassination of General Qassem Soleimani.

Still, tensions were high. Iran’s air defences were no doubt on maximum alert for a possible U.S. response. It’s likely that rules of engagement were loosened to allow field commanders more flexibility in responding to threats. And of course there would have been the ego element: Many Iranian commanders would be eager to be the ones to down an American bomber, or a drone or intercept an incoming missile. It would have meant instant hero status.

It’s not hard to imagine in such a scenario events racing out of control. Perhaps a poorly programmed or malfunctioning radar system erroneously identified Flight 752 as a foe, as was the case in 1988 when an Aegis system aboard the USS Vincennes mistakenly swapped the signal from a distant Iranian F-14 with an Iranian passenger plane, leading to its destruction and the deaths of 280 people.

Instead of initiating normal verification procedures, it’s likely the system commander, fearful, paranoid, or excited – or some combination of the three – decided this was the moment the Iranians had been expecting. An enemy bomber had infiltrated to within striking distance of Tehran. He fired.

The problem with air defence systems, Kilford said, is that they are “one of the most technologically dependent” components in any armed forces. Not only can they fail but “you need highly qualified people in the fire units and command centre. If anything, this incident could reveal serious command and control and training issues in the Iranian air defence forces,” he said

The point here is that when there is in interface between imperfect humans and complex mechanical systems in a heightened state of confrontation, these kinds of mistakes happen. The U.S. has made the same mistake, as have others.

The blame here can’t entirely be placed on Iran. As my colleague, Scott Gilmore, argues, when the leader of the world’s most powerful military acts out in his own self-interest, innocent people die.

That of course does not absolve Iran of culpability. What its leaders do next will be a measure of how serious its claims of being a responsible member of the international community are. In 1988, the U.S. admitted its mistake, apologized and paid compensation to the families of the victims.