It’s not the job he was chosen for, but the Pope is emerging as a major power player in a troubled region 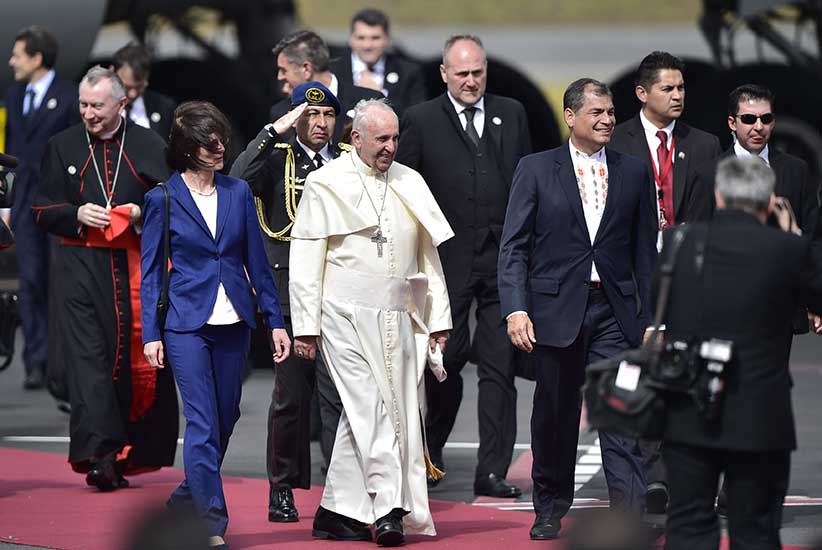 Pope Francis talks often of a church for the poor and putting peripheral places at the centre. Fittingly, the first Pope from South America arrived on Sunday for a tour of three of its poorer and more peripheral places: Paraguay, Bolivia and Ecuador.

He stepped off the papal plane in Quito as one of the region’s more popular public figures—no surprise in a heavily Catholic continent. His opening remarks touched on the environment, an issue, along with poverty, the Pope is pushing in Latin American and beyond. At an open air mass, hundreds of thousands of followers gathered to hear his homily, which focused on family issues and alluded to controversial issues within the church like divorce and homosexuality.

But his popularity is surpassing the spiritual realm in Latin America. He is also fast becoming its most prominent political figure, with a straight-talking style and austere sensibilities that play well in an area now consumed with leadership crises, corruption scandals, and a sinking sense that the economic boom of the last decade has gone bust.

His influence has risen as other once-towering political figures fade from the picture, says José María Poirier, publisher of the Catholic magazine Criterio in Buenos Aires. Ex-Venezuelan president Hugo Chávez died in 2013. Ex-Cuban dictator Fidel Castro is closing in on 90 and mostly stays out of sight. Former Brazilian president Luiz Inácio Lula da Silva, whose administrations were widely lauded, hasn’t had much regional sway since leaving office in 2011.

Francis, by comparison, helped to end the U.S.-Cuba estrangement this year, has condemned regional ills—including drug cartels, violence and poverty—and issued an encyclical on the environment. The encyclical angered American conservatives—a group, Poirier says, the Pope doesn’t care about. But it exposed Francis’s Latin American sensibilities—combining religious and social affairs, showing a preoccupation with poverty, and expressing anti-colonial attitudes. “You have this spiritual leader from Latin America, now raising his voice in favour of the least well off. This plays well, and I’m sure the Pope is aware of it,” says Juan Carlos Hidalgo, a Costa Rican native and policy analyst at the Cato Institute in Washington.

Related: The rift between Pope Francis and his American bishops

Meanwhile, recent scandals are also fuelling a turn to the Pope for political guidance. In Guatemala, the vice-president resigned after allegations of graft. In Honduras, protesters have demanded President Juan Orlando Hernández’s resignation over reports that embezzled money ended up being used in his campaign. Mexican President Enrique Peña Nieto’s approval plunged after his inept handling of the kidnapping and killing of 43 students last fall. Brazil is reeling from revelations of corruption in the state oil company Petrobras, along with accusations that members of the governing party accepted bribes. After delivering mass in Quito, Francis met with the president of Ecuador, Rafael Correa, who, just three days earlier, faced mass street protests over plans to dramatically boost taxes on capital gains. Even with Francis in town, people screamed, “Correa out!” as his motorcade passed through streets lined with papal well-wishers.

Related: How Mexico’s answer to the Onion has become a vital critic

The prosperity of the last decade—fuelled by high commodity prices—moved tens of millions into the middle class. Such mobility generated expectations of better public services and something better than the old status quo. “There’s a sense that the [politically] well-connected continue to do well, even when middle-class living standards are stagnating, or worse,” says Eric Farnsworth, vice-president at the Americas Society/Council of the Americas. “This may be one reason why the Pope’s comments on economics have struck such a positive chord across Latin America. He speaks with clarity and moral authority to a region hungry for both.”

In his first trip to Latin America as Pope, to World Youth Day 2013 in Brazil, he condemned drug cartels as “merchants of death” and opposed drug legalization. (His predecessor, Pope Benedict XVI, visited Mexico the year before and stayed silent on the issue.) A leaked letter on violence to a friend in Argentina warned of the “Mexicanization” of the country, drawing howls of outrage from the Mexican government.

Francis has already voiced support for the peace process in Colombia and promised to visit. Venezuelans have expressed hopes for intervention, as political prisoners languish and shortages of basic products persist. (President Nicolás Maduro cancelled a June meeting with the Pope at the last minute, citing illness.) Some analysts see Francis assuming the old role once occupied by Venezuela’s Chávez, the region’s chief critic. “One thing the Pope is doing that hasn’t been done in a long time is have a sustained criticism of the status quo,” says Greg Weeks, a political science professor at the University of North Carolina at Charlotte. “He’s criticizing both [the left and the right], because the status quo, in some countries, is the left.”

Francis has never been fond of staying silent. “He has a nose for politics,” says Poirier, who conversed regularly with the Pope (born Jorge Mario Bergoglio) before his election in 2013. “He likes to wield power and knows how to do it.” Francis rose through the ranks of the Jesuits to become auxiliary bishop of Buenos Aires in 1992 and archbishop in 1998. He clashed with the Kirchners—president Néstor Kirchner and his wife, Cristina Fernández de Kirchner, who succeeded him—criticizing their populist policies and alleged corruption. “Not only is he austere, but he has the credentials to denounce corruption,” says Sergio Berensztein, a political analyst in Buenos Aires.

More recently, some observers see Francis as having played a stabilizing role in Argentina, as the country again confronted default and a softening economy.

Whether the Pope’s leap into regional leadership can help the Church is another matter. A 2014 Pew Research Center survey found just 69 per cent of adults in Latin America identify as Catholic, down from more than 90 per cent four decades earlier, with many switching to evangelical congregations that teach a prosperity gospel—namely: God wants you to be rich. “His No. 1 job is evangelism,” says Andrew Chesnut, a religious studies professor at Virginia Commonwealth University and a consultant on the Pew Survey. “The main reason he is Pope is the hemorrhaging of Catholics in his region since the 1970s. So what, specifically, is the Church doing to remedy that situation?”