How the world is legitimizing the Taliban 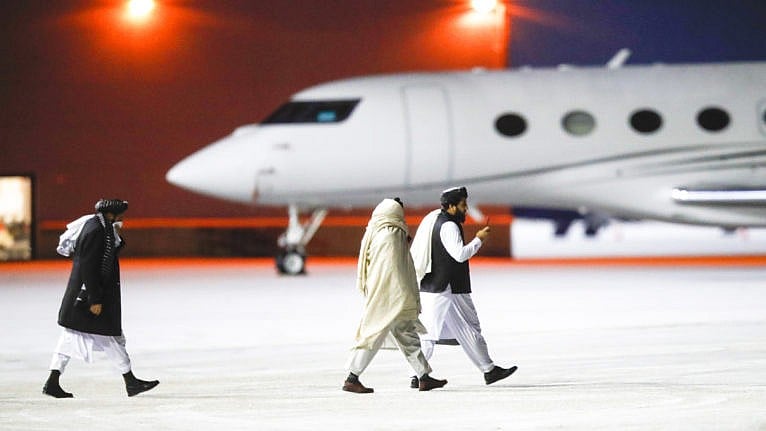 Representatives of the Taliban leave Gardermoen Airport after attending meetings in Oslo, Norway, on Jan. 25, 2022 (Javad Parsa/NTB via AP)

Two very different viewpoints emerged from meetings between western officials and top leaders of the Taliban last week in Oslo, Norway. From the European and American perspective, the meetings were in no way a legitimization of the Taliban regime in Afghanistan. The repeated attempts to make that point clear became almost comical over the three-days of meetings, culminating in near-farcical speeches at the UN Security Council where everyone, from Secretary-General Antonio Guterres to Canada’s former Ambassador to Afghanistan, and current United Nations Special Representative, Deborah Lyons, seemed to bend over backwards to explain why it was necessary to engage with an internationally-sanctioned terrorist organization (it’s all about saving lives, you see, but more on that in a bit).

The Taliban, meanwhile, glided through the week with an air of fait accompli, not unlike they did during their negotiations with the U.S. over a peace deal to end the war in Afghanistan. Like then, they were now being told that they would get everything they wanted without having to make any concrete promises in return.

Not surprisingly, their comments about the meetings were glowing. “All the participants, with one voice, declared such meetings to be in the interest of the country,” Zabiullah Mujahed, the Taliban’s spokesperson, tweeted after the first day of meetings on Jan. 24. “At the end, the participants thanked Norway for paving the way for such an opportunity.”

READ: The last trip out of Afghanistan: ‘There is no way back. Taliban are outside.’

Human rights defenders, particularly Afghans, were livid. Everyone I spoke to condemned Norway and the international community, particularly the UN, for what they said amounted to a de facto recognition of the Taliban as the legitimate government in Afghanistan.

It didn’t help that in the days leading up to meetings, men claiming to be Taliban intelligence officers had raided the houses of women’s rights activists in the capital, Kabul, beating and detaining them for what an intelligence spokesman later claimed had been insults to the “religious and national values of the Afghan people” during peaceful demonstrations. In a chilling video posted to social media, one of the women, Tamana Zaryabi Paryani, recorded the intelligence officers attempting to smash down her door. The video cut as the door seemed on the verge of giving way. Paryani has not been heard from since.

In the days since, two more women activists have been detained.

According to my sources, UN officials are baffled by the negative reactions. The general opinion at UN headquarters in New York is that there is little choice but to deal with the Taliban because millions of lives are at stake.

Afghan human rights activists tell me it’s not a question of engagement but the manner of that engagement. “We know the Taliban,” Rangina Kargar, a member of the Afghan parliament and women’s rights activist now living in exile in Istanbul, said. “They will lie and cheat to get what they want. You must deal with them firmly and demand concrete actions in return for your cooperation.”

READ: The world left these Afghan women behind. Now they’re fending for themselves.

The international community, she added, appears not to have learned its lesson after the fiasco of the U.S.’s negotiated settlement with the Taliban. Under that agreement, the Taliban were supposed to hash out a negotiated settlement with the Afghan government and enter into a power-sharing agreement that would be inclusive of Afghanistan’s ethnic -minorities. They were also supposed to allow anyone wishing to leave Afghanistan the freedom to do so. Neither of those promises were kept when the Taliban forcibly took over the Afghan capital.

Since then, they have refused to set up an inclusive government and respect basic human rights. “Targeted killings have increased, intimidation of rights activists has increased, silencing of the media has increased,” Shaharazad Akbar, the former head of the Afghanistan Independent Human Rights Commission told me. “So you tell me how the Taliban are in any way entering into a good faith dialogue with the international community.”

Instead, the Taliban’s arc over the past five-and-a-half months—from internationally-sanctioned terrorist organization engaged in a brutal asymmetric war against Afghanistan’s democratically-elected government to jet-setting into Europe for face-to-face meetings with American and European leaders—suggests they are on the path to de facto legitimation.

On Feb. 2, the Taliban’s foreign minister, Amir Khan Muttaqi, admitted to the AFP that the group’s leadership felt they were now closer to full recognition.

How that will happen is not hard to imagine: meetings like the ones in Oslo help the Taliban slowly chip away a place for themselves in the international community. Individually, these meetings do not amount to official recognition; but a meeting here and a summit there will, in the aggregate, secure a seat for them at the table.

As these meetings progress, the Taliban will throw out a bone every now and then—like allowing girls to go to school—making it progressively less difficult to do business with them. Women will still face a grim future, of course. They will remain barred from the workforce, or offered token roles in society for the sake of keeping up appearances. They will be abused and silenced, with virtually no recourse to justice. The media will continue to operate, but under strict self-censorship. Critics and human rights activists will continue to disappear into Taliban prisons and never be seen again. The international community will occasionally wag a finger at these abuses, but then sign a deal for mining cobalt, or some other badly-needed commodity. And the wheel will keep turning.

There are plenty of countries out there who have gained legitimacy in exactly that way. We do business with them all the time.

At the same time, many Afghans worry that the UN is only making it easier for the Taliban to maintain their grip on power by reducing the burden of governing for them. “They are hand-holding the Taliban through this crisis,” one Afghan businessman who has fled the country told me recently, requesting anonymity because he still has family inside Afghanistan. “They propped up the old corrupt officials and now they are doing the same thing with the Taliban. They are literally holding their hands, from providing services for them, helping them with securing aid money, propping up the banks…It’s like they’re telling them: ‘Don’t worry, we have you covered.’”

What the international community should be doing instead, he adds, is providing basic emergency relief to prevent a human catastrophe, particularly through the brutal winter months. If the Taliban want help in other ways to govern Afghanistan, then they must first demonstrate they are willing to change. Otherwise, as research has shown, helping the Taliban deliver services and rebuild Afghanistan’s economy will only help them gain more legitimacy.

This bare-necessities approach will, of course, mean more suffering for Afghans in the short term. The reflex will be to intervene to help relieve that suffering. But by doing so, we also relieve the Taliban of their responsibilities as Afghanistan’s new rulers. And the only lesson they’ve learned in their interactions with the international community is that they can exploit its humanitarianism.