How to be a sensible parent in gun-crazed America

Searching out firearm-free restaurants. Refusing play-dates at households with guns. In the Land of the Free, being the adult in the room isn't easy. 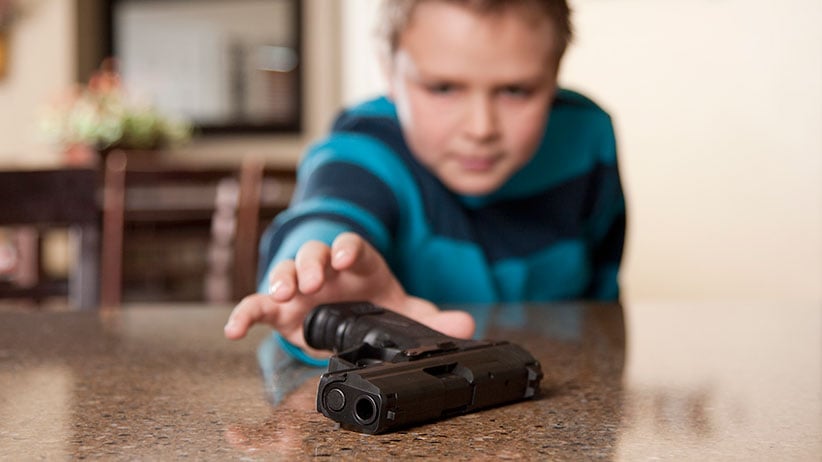 Jaime Thompson was seven years old when she found her mother’s gun underneath the water bed. She stared at the weapon, knowing that firearms weren’t something to be trifled with, but she had a sense of accomplishment because she’d found its hiding spot.

She told her mom, who would soon hide the gun someplace else. “Then it turned into this game to find it,” recalls Thompson, now 39, recounting what sounds like a ongoing childhood game of hide-and-seek between a girl and a gun.

Thompson, an IT professional, is aware—and lucky—that her joy in finding the firearm outweighed her curiosity to ever pick it up. But she won’t come close to taking the same risk with her two children, the eldest who is now seven. “I’m not fearful of guns,” she says. “I’m fearful of a child being curious about it.”

Thompson doesn’t keep a gun anywhere in her family home in Los Angeles, yet she can never be sure other parents in the neighbourhood feel the same way, which is why she’ll go an extra step before letting her kids go on a play date. Thompson will first contact the other child’s parents to ask if they keep a gun on the premises. An affirmative answer could hinder a budding childhood friendship, no matter how well versed the kids are on gun safety.

Thompson is among the growing chorus of safety-conscious parents speaking up about their efforts to keep guns as far out of reach from curious kids as possible. Some go even further, dining only in restaurants that have an explicit gun-free policy, or avoiding the homes of relatives who don’t lock up firearms safely.

They happen far too often, especially in America. Last year alone, unintentional shootings took the lives of at least 249 children under the age of 18, according to data from the non-partisan Gun Violence Archive. And it’s not as if the victims were all wayward teenagers: 102 of the deceased had yet to celebrate their 12th birthdays. Read enough media coverage of these tragedies and you notice a depressing preponderance of them dying from shots to the head.

Then there are the adults on the receiving end when children’s fingers are on the trigger—like the 57-year old grandfather in North Carolina who died in October when his four-year old grandson accidentally shot him with a rifle. Or the sleeping father in St. Louis, Mo. who took a bullet through the neck in September when his two-year old boy was playing with a handgun, only for a shot to go off. Or the hundreds of adults and children alike who’ve been injured each year—but luckily not killed—when Little Johnny or Little Jenny had a gun.

Meanwhile, firearm-related deaths, be they from intentional or unintentional shootings, count as the third leading cause of death among Americans aged one to 17, according to a 2017 study in the journal Pediatrics.

Parenthood in America, it would appear, is no longer as simple as worrying about a child’s diet, curfew, school grades, exercise, friends and screen time. At least, it’s not for moms and dads trying to navigate child safety in a country where 42 per cent of the population lives in a home with gun, according to the Pew Research Centre.

RELATED: Donald Trump’s vacuous fix for school shootings in the face of grief and anger

“The safest home is a home without a gun,” according the American Academy of Pediatrics. The pro-gun National Rifle Association counters: “That is unless, of course, there is a home invasion, in which case the absence of a gun leaves your family defenceless.” One instructor at a 2016 NRA conference reportedly advised parents to keep guns locked away in their kids’ bedrooms, because that’s the first place parents will run to instinctively in the event of a break-in.

As Americans get conflicting advice from experts and so-called experts (depending on which side one subscribes to) families can find themselves on opposing sides in the culture-war trenches.

The turning point for Megan Zander’s family came after the 2012 Sandy Hook shooting in Newtown, Conn. She was pregnant at the time with two boys when, a mere 45-minute drive from her home, a gunman entered an elementary school and fatally shot 20 first graders, plus six more adults. Zander knew one of the victims.

Prior to that day, Zander says, no one in her family even had a gun permit. Afterward, however, family members chose one of two polarizing solutions. “For some of us, we thought there needs to be less guns in this country,” Zander says. “For others in my family, they thought: ‘We need to arm ourselves.’”

Zander and her sister decided to keep their families away from guns. Their parents, on the other hand, chose to get permits to pack heat.

As Zander’s twin boys grew older—and more curious—she wondered what to do when it came time to visit relatives at Thanksgiving or Christmas, knowing her aunt has a permit to carry a concealed weapon. What were her options if Grandma and Grandpa offered to have the kids over when she knew there were guns in the house?

RELATED: Another school shooting in America, and all the nonsense that will be said

“Is it more important for me to keep the peace and not offend anybody?” Zander asks. “Or is important to say something, because God forbid I don’t, and something happens where I would never forgive myself.” In the end, she chose the latter.

Zander says she’s up-front with her parents about her concerns during visits, asking upon arrival where the guns are being kept. “I don’t think it has to be a big long speech about my stance about gun rights and them on the Second Amendment,” she says. “It’s just, ‘Hey—we’re here. Where are the guns? Are the guns locked up?’”

And if her folks offer to watch the kids without her around, the rules are clear: the guns must be unloaded and locked in a lock box, which is then kept in a closet that is also locked. Bullets, meanwhile, must be locked and stored at a separate location in the home.

“That’s the only way I will allow my kids to be in that house without me present,” Zander says. “My dad will joke ‘[the guns] are not of much use to us if anything happens.’ But fortunately, my mom backs me up. We’re not having an armed gun in that house.”

The same rules apply for visits with other family members she trusts to watch over her kids. But if it were the parents of her sons’ friends, she says, it wouldn’t matter if she was told the guns are kept properly locked away: she probably wouldn’t let them go.

Zander insists she isn’t arguing about anyone’s right to bear arms—in fact, she doesn’t believe all guns should be banned. Rather, the point is doing what she as a parent feels is safest for her child.

It’s a recommendation echoed by the American Academy of Pediatrics and the Brady Center to Prevent Gun Violence, which collaborated for the ASK campaign, where parents pledge that they will ask—and encourage others to ask—if there are any unlocked guns in the home where their child will be playing.

For those uncomfortable bringing up the subject of guns, and there are many, “I give them kind of script,” says Dr. Eliot Nelson, a pediatrician at the University of Vermont Medical Center. “My son is a really curious kid and I know there are a lot of guns in Vermont, so I worry about it if he’s around a place where there might be guns that aren’t locked away. ‘Do you have any guns? And if so, how are they stored?’”

Nelson’s preference would be that homes with children be gun-free. But in rural Vermont, he knows that’s a tough ask. Still, Nelson brings up the subject with his patients, even as their parents standing with them, advising what to do if they ever find a gun: don’t touch it and go tell an adult.

It’s the essentially the same advice given in the NRA’s Eddie Eagle GunSafe Program—1) Stop! 2) Don’t touch 3) Run Away 4) Tell a grown up—though Nelson says Eddie Eagle’s tips are insufficient because research (and history, and perhaps common sense) will tell you that there will be always curious kids who will want to touch them. To which he has one last piece of important advice for kids: “Don’t ever let a friend tell you he knows it’s not loaded.”

And yet, there are some scenarios parents can’t prepare for, like what if American schools arm their teachers, as President Trump recently proposed, as means to deter another mass shooting like the one in Parkland, Fla.? What’s a parent to do then?

“Homeschool,” answers Zander. “I know that sounds like a knee-jerk statement, but it’s really not.”

Thompson, for her part, doubts the local government—or local parents—would ever let teachers carry guns in their liberal part of California. But if her son’s first-grade teacher were armed today, she says, “I would not send my seven-year old into a classroom where there is a gun. I’d probably question where I’m living.”