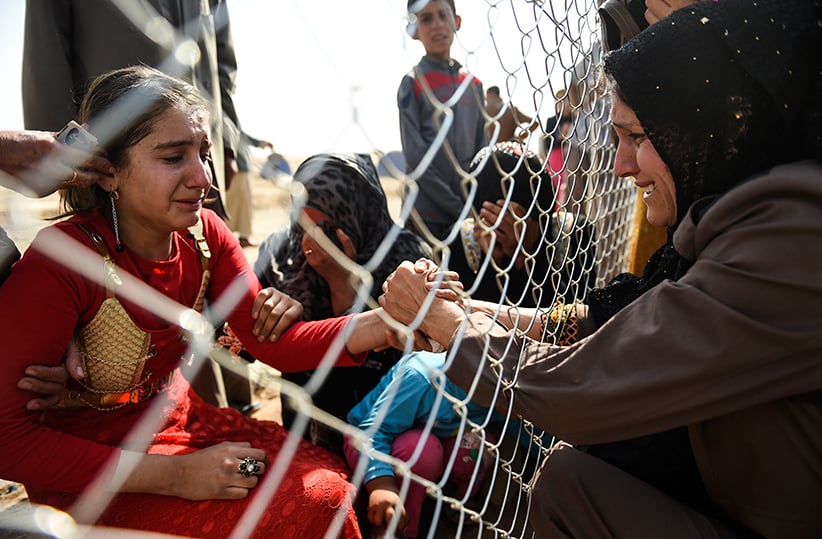 Newly displaced Iraqi’s who fled from the city of Mosul, Iraq’s last major Islamic State group stronghold, cry as they are reunited with their relatives at the refugee camp in the Khazir area on Oct. 26, 2016. (Bulent Kilic/AFP/Getty Images)

Just over a year ago, I made a prediction in Maclean’s that 2016 would be the year the world would witness a new stage in the refugee crisis that began in 2015. The argument was relatively straightforward: as the mirage of the self-styled Islamic State disintegrated, civilians, mostly Sunni Arabs who had lived through its rule, would become the targets of a campaign of fear that would condemn them to perpetual statelessness at best and, at worst, extermination.

My prediction was wrong in one sense: it took a little longer than anticipated.  Last year was not the year Islamic State’s so-called caliphate collapsed, though the process in Iraq has now reached what we might call an inevitable phase. The crisis of refugees deemed too dangerous to be trusted simply because they had not abandoned their homes when ISIS arrived did not reach the world’s attention, though human rights organizations warned repeatedly that it was coming.

It took a few months longer than expected but this week, it finally arrived. On March 6, Trump signed a new executive order suspending travel to the United States from six predominantly Muslim countries.  Six, not seven, as was the original plan.  The country dropped from the list was Iraq, in part, according to the new order, because of the “close cooperative relationship between the United States and the democratically elected Iraqi government.”

Nonetheless, Iraqis are by no means free and clear. The order went on to say that Iraqi citizens should be subjected to “additional scrutiny”, particularly those “coming from territories controlled or formerly controlled by ISIS.”

These same people, according to a Human Rights Watch report published on March 5, have been systematically targeted by Iraq’s security forces and accused of ISIS sympathies.

So in practice, nothing has really changed. Iraqis remain suspect, despite the fact that they have never carried out a terrorist attack on U.S. soil.  Moreover, the wording of the new order explicitly gives a nod to the growing suspicion in Iraq, Turkey and elsewhere, that Sunni Arabs and especially those who lived in ISIS territory, often for reasons out of their control, pose a special threat.

That excuse has been used by Kurds in northern Iraq to deny Sunni Arabs from Mosul access to medical facilities in Iraqi Kurdistan. It has been used by Shia militiamen who are fighting alongside the Iraqi army in Mosul to arbitrarily detain, and in some cases summarily execute, Sunni Arab men and boys. Now, for the first time, a western leader has openly sided with those Shia extremists.

Clearly, that is a cause for concern. Best estimates put the number of Sunni Arabs living under ISIS control in Iraq and Syria at around six million. Hundreds of thousands have fled the fighting in Mosul and now live in refugee camps. Many more remain in the city, with nowhere to go and the atmosphere increasingly poisoned against them. ISIS propagandists have begun to claim that the Shia, backed by U.S. forces, are on a mission to exterminate Sunnis. Trump’s ban gives them more ammunition.

What will happen to these people?

Ironically the first Trump ban, signed on Jan. 27, actually offered minority Sunni Arabs in Iraq a way out. As Trump noted in his updated ban: “While [the original] order allowed for prioritization of refugee claims from members of persecuted religious minority groups, that priority applied to refugees from every nation, including those in which Islam is a minority religion, and it applied to minority sects within a religion.”

If Trump’s ban was indeed free of religious discrimination, as its framers contended, Iraq’s Sunni Arabs, persecuted by the majority Shia and Kurdish security forces in areas liberated from ISIS, would represent “a minority sect within a religion”.  Would they have received special consideration?

Likely not. But the point is now moot. Exceptions based on religious persecution are no longer part of the new executive order. The sanitized version instead places emphasis on an intellectually suspect notion that if you lived under terrorist rule, you must be a terrorist unless you can prove otherwise. Under the current conditions in Iraq, most Sunni Arabs will have a hard time convincing authorities that they had nothing to do with ISIS.

No one believes them.  Most fear them.  This is the new face Iraq’s refugees.