How will Scotland react to Brexit?

Scots voted against Brexit in greater numbers than any other region. Will that vote lead to another referendum on independence? 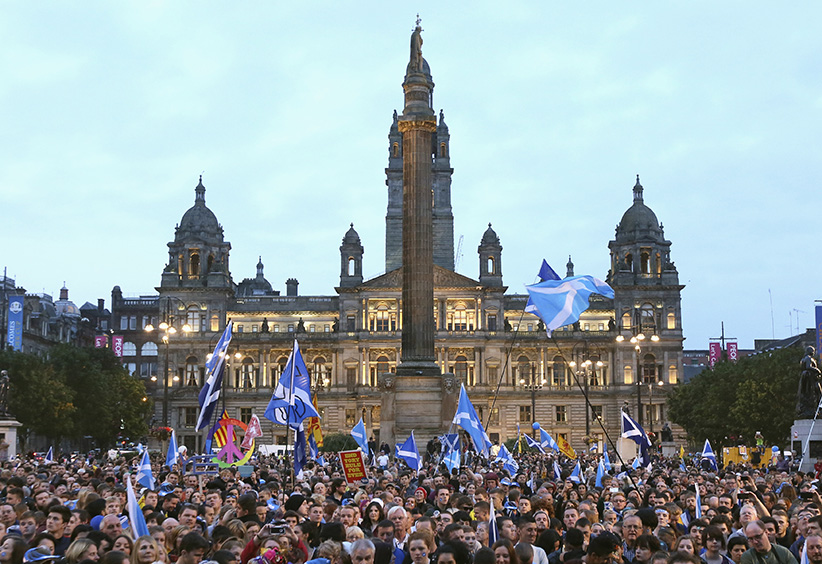 Supporters of Scottish independence gather for a rally in George Square, Glasgow, Scotland September 17, 2014 in advance of the referendum on Scotland separating from the United Kingdom. (Paul Hackett/Reuters)

Scotland overwhelming voted in favour of staying in the European Union—62 per cent of the country voted Remain, the highest of any region in the U.K.—though voter turnout was a relatively low 67 per cent. That means less than two years after Scotland had a national referendum to decide if it should remain part of the U.K., the Scots now find themselves leaving the EU against their wishes.

Scottish First Minister Nicola Sturgeon says such a fate would be “democratically unacceptable.” The ruling Scottish Labour Party campaigned against holding another independence referendum unless something “material changed,” and obviously the Brexit vote qualifies. Sturgeon now says a second referendum for Scottish independence is “highly likely.” The leader of the official opposition, Ruth Davidson of the Conservative Party, says a new vote won’t help the country’s stability, though she too had been campaigning for the “Remain” side.

MORE: Scotland on Brexit results: ‘We do not want to leave the EU

Based on the independence and Brexit referendums, Scotland clearly wants to be part of both the European Union and, to a lesser degree, part of the United Kingdom. Since they can no longer have both, the question is: Which side will they choose?