How Yemen became a stage for proxy battles

How an insurrection in Yemen has spun into a regional battle. Michael Petrou on a new Gulf war 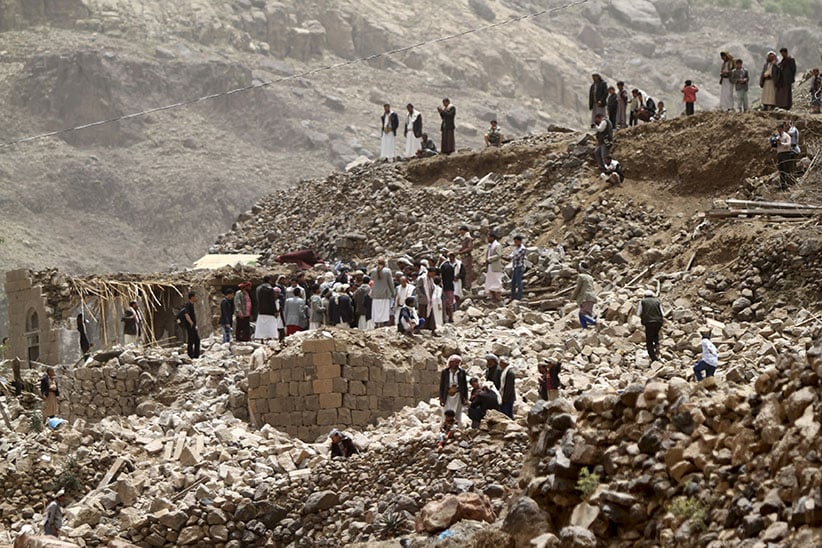 Yemen, already the poorest country in the Middle East, is falling to pieces.

Its most recent troubles intensified last year, when the Houthis, a movement composed of Zaydi Shias, a minority sect within the predominantly Sunni Muslim country, captured the capital, Sanaa. With mostly light arms and artillery, the Houthis routed government troops and Sunni militias in only five days. They dissolved parliament and proclaimed a revolutionary government. President Abd Rabbuh Mansur Hadi fled the city and, eventually, the country, for refuge in Saudi Arabia.

But much of Yemen remained beyond the Houthis’ control: in the hands of Hadi loyalists, or of al-Qaeda in the Arabian Peninsula, a local affiliate of the international terror group, which opposes both the Houthis and Hadi’s government.

With the state near collapse, late last month, a Saudi Arabia-led coalition launched a military intervention, bombing Houthi positions (as well as a refugee camp). Eight other Arab countries are now involved in the campaign. The United States is supplying intelligence. Pakistan’s parliament refused a Saudi request to take part in the mission. Hundreds have died. Tens of thousands have been displaced. The seaport city of Aden is a war zone, its hospital reportedly undersupplied and struggling to handle the wounded.

The mission’s stated goal is to restore Hadi to power. Saudi Arabia’s ambassador to Washington claimed that his country had responded to a request for assistance from what he described as Yemen’s legitimate government. But Riyadh’s real target is not the presidential palace in Sanaa. It’s Tehran.

Saudi Arabia and its allies see the war in Yemen as another front in a much larger struggle with Iran for control of the Middle East—one that is also fought in Syria, Iraq and Lebanon. It is a conflict with strong sectarian overtones. Iran is a Shia power. Saudi Arabia sees itself as the leader of the Sunni Muslim world. The Houthis, in Saudi eyes, are Iranian pawns, Shia proxies armed and funded by Tehran. It’s this perception that makes the conflict in Yemen much more dangerous, and potentially destabilizing, to an already tumultuous region.

Iran, for its part, strongly denies it is backing the Houthis. American Secretary of State John Kerry has countered with allegations, aired in an interview with PBS Newshour, that America has tracked numerous Iranian supply flights to Yemen. Iran has also sent two navy ships toward Aden, supposedly to guard shipping lanes.

Saudi Arabia sees little reason to give Iran the benefit of the doubt. “For the Saudis, given what has happened in the Middle East since the fall of Iraq in 2003, Iran is the villain, and Iran is everywhere,” says Fawaz Gerges, a professor of international relations at the London School of Economics and Political Science, referring to Iran’s greatly enhanced influence in Iraq after the overthrow of Saddam Hussein.

The problem with blaming the war in Yemen on Iran, and on Sunni-Shia animosity, says Matteo Legrenzi, a professor at Ca’ Foscari University of Venice, is that the Houthis have rebelled seven times in the last 12 years, and it is only of late that their opposition has been framed primarily as part of a broader sectarian struggle. “This is a domestic, indigenous insurrection,” he says.

Gerges describes the Houthis as the “untouchables” of Yemen. “They were seen as second-class citizens. They were abused. They were never integrated into the social and political sphere,” Gerges says. “They were not taken seriously, discriminated against, excluded. They have a sense of victimhood.” This is what has driven their insurrection, say Gerges and Legrenzi—although Legrenzi adds: “The Iranians are always looking for occasions to increase their leverage in the region.”

In an unusual twist, the Houthi rebels now have the support of tribes backing former president Ali Abdullah Saleh, whom they had previously fought. The Houthis played a prominent role in protests against Saleh during the Arab Spring of 2011. Saleh formally ceded power to his vice-president, Hadi, in February 2012, but evidently still wishes to play a role in Yemeni politics.

It adds up to a messy civil war. It’s been years since any government in Sanaa controlled all of Yemen’s territory. But now, the conflict is becoming internationalized.

Much of the Sunni Middle East has mobilized militarily. The United States, with little fanfare or public discussion, is effectively at war in Yemen: It may not be dropping bombs, but its drones are guiding Saudi ones.

And yet, the coalition’s strategy is vague. “If the Saudis continue bombing, they will obviously be able to damage the Houthis’ capabilities,” says Houchang Hassan-Yari, a professor at Queen’s University and the Royal Military College of Canada. “But we are talking about people who are living in their own country,” he adds, meaning they are not a group that can practically be expelled from Yemen.

An escalated intervention involving ground troops may push the Houthis from territory they have captured, perhaps allowing Hadi to reclaim the presidency. But, says Hassan-Yari, Hadi didn’t lead a credible government before the latest Houthi insurrection. “I wonder how he [could] do it with the presence of foreign troops.”

The best possible outcome of the Saudi Arabia-led campaign may be that it forces the Houthis and Hadi’s supporters to negotiate a compromise that ends the war. They do, after all, have a common enemy in al-Qaeda, and its Islamic State offspring, which is seeking a foothold in the country. Both jihadist groups thrive in ungoverned spaces.

Unfortunately, says Gerges, reconciliation is becoming more unlikely, as the “myth” defining the conflict—that it is a sectarian struggle—risks becoming reality. The Houthis, he argues, being Zaydis, are theologically closer to Sunni Islam than they are adherents of mainstream Shiism. The Iranians may be “convenient allies” of the Houthis, he says, but they are not natural theological partners. But, as other countries link Yemen’s civil war to the ongoing regional clash between Iran and Sunni states, and between Shias and Sunnis more generally, the conflict inside Yemen is shifting.

“What’s happening now in Yemen could easily drive 10 million Houthis into the arms of Iran. This is the irony,” says Gerges. “My fear is that if this war continues, you’re going to have another Syria, another Iraq, another Lebanon. Now it’s becoming more and more a proxy war, even though this is essentially a local conflict.”

Yemenis have not had an easy time since North and South Yemen were united only 25 years ago. They’ve lived through civil strife, and may now bear the brunt of their neighbours’ grudges and ambitions. Their suffering is unlikely to lessen soon.