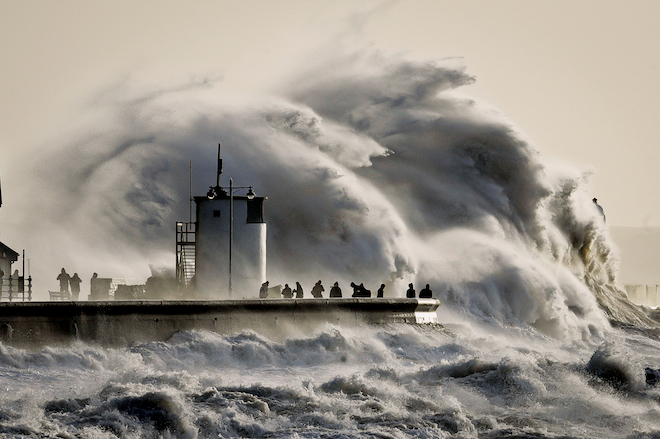 Massive storms that have lashed swaths of the United Kingdom have left houses flooded and produced colossal waves, inspiring awe from international eyes and thrill-seeking tourists alike. And yet in the little town of Porthcawl, one of the most famous wave-crashing locations on the coast of the Bristol Channel, the mentality is curiously calm.

“The waves actually came up over the top (of the cliffs) yesterday—I was walking the dog, and the waves actually came up onto the green,” said Arthur Burgess, a former engineer who fell in love with the area 40 years ago and is now the owner of the local pet shop. Locals say that while the waves rarely get this big, a confluence of the tides and the winds means they endure spectacular surf every couple of weeks.

Sean Warrington, the recently named harbourmaster for the area, already sounds hardened to the realities of the waves that, to the rest of the world, appear nearly unfathomable. “The local community is used to it,” he says. “I knew the reputation of the area when I came here, so it’s just one of those things. These are extremes, obviously, but it’s just taken everyone by surprise right now, the vast content of the weather at the moment.”

Still, the waves do batter the fragile coast—and have claimed lives before. Burgess recalls one particular storm a decade ago that he compared to being “like a tsunami.”

“We had a young lad, a young schoolboy, and he was lying on the rocks by the lighthouse. He was playing tag with the waves—he would lie down and let the waves crash over him,” Burgess said. “Unfortunately, the waves took him in, and they found him on the beach, seven days later.”

Typically, Warrington says, the Coast Guard will close down areas to prevent such tragedies, but, he added simply, “We obviously can’t protect everyone.”