I travelled to Pakistan to help with flood relief. It was devastating. And inspiring. 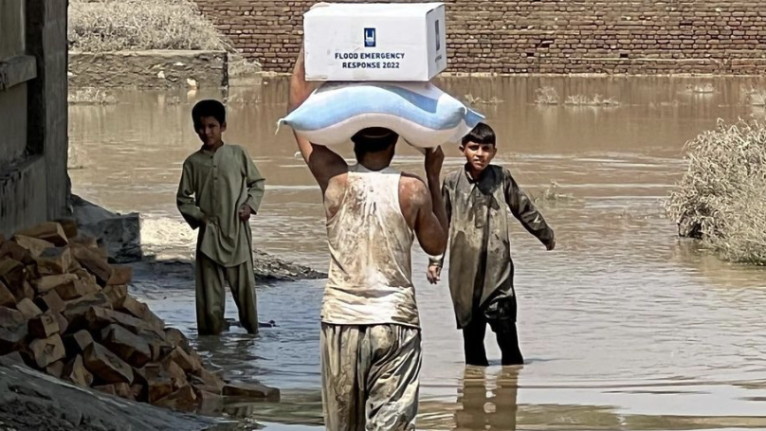 “We quickly went from driving on dusty, dirt roads in a scorched, dry area to being completely surrounded by water.” (Photo via Instagram @mashys97)

Following a summer filled with the worst floods Pakistan has ever seen—which displaced more than 33 million people and killed at least 1,678—countless volunteers and aid workers visited the country to help with relief efforts. One of them was Mashaal Saeed, a Pakistani-Canadian who travelled to her home country with Islamic Relief Canada. She was devastated by the destruction she witnessed, and remains determined to help in any way she can. This is her story.

“For the past three years I’ve worked for Islamic Relief Canada. I moved from Saudi Arabia to Mississauga, Ont. when I was five years old, but regularly visited the homes of friends and family members in Pakistan. I was always greeted with warmth and hospitality. During my most recent trip, I witnessed unimaginable destruction as a result of this summer’s historic floods, but the people I met were just as warm, hospitable and filled with hope as I remembered. It was both devastating and inspiring.

I had been planning to visit Pakistan with Islamic Relief Canada for several months to check on some of our organization’s long-term initiatives there. But the situation changed drastically after massive floods—caused by an unusually intense monsoon season, melting glaciers and a severe heat wave—wreaked havoc on the country this summer. Though I was nervous leading up to the trip, sitting at home in Canada watching what was happening made me feel helpless. I was eager to get there and do whatever I could to help.

As we pulled into a town in the province of Khyber Pakhtunkhwa, which was heavily affected by flooding, my brain could not process what I was seeing. We quickly went from driving on dusty, dirt roads in a scorched, dry area to being completely surrounded by water. There was so much water that I initially thought I was looking at a lake, but then I saw the roofs of drowned houses.

By the time we visited, the water had already receded significantly from where it had been just days prior, but it was still up to my shoulders (or even higher) in some areas. In many of the places we saw, the water remained at a standstill. Locals told me that this was one of the main differences between these floods and flooding in previous years. One man told me he’d lived through two other devastating floods in the country, but this was by far the worst because the water came in quickly and stayed for days or even weeks, whereas in the past it receded almost as quickly as it arrived.

And it’s not just water—it’s mixed with sewage, trash and dirt. This is causing major health issues for Pakistani people. Locals told me at least two people in their town had passed away from dengue, a virus that is transmitted by mosquitoes and thrives in moist conditions. I suspect that number has risen since I left.

RELATED: Nothing prepared me for what I saw in Ukraine

Driving through the country, I saw protective walls that had been installed to defend against floods but didn’t stand a chance and crumbled at the force of the water. I saw skeletons of buildings that were once hotels and schools that had quite literally been washed away in the storms. I saw huge, ancient trees ripped from their roots. I saw massive bridges made from stone—bridges that were once sturdy and strong—demolished and destroyed. Because of the number of bridges that were destroyed by the floods, providing aid to certain areas was impossible at first, but fortunately Islamic Relief Canada is now able to do so via helicopter.

The water also brought in thick, sticky, slippery mud, and I witnessed locals using squeegees to remove this mud from their barely standing homes. In some places, it was still up to their knees when I arrived.

But despite the unlivable, devastating conditions I witnessed, the people we met were nonetheless eager to welcome us in and show us what remained of their homes. That was an emotional experience for me, because the community really let us in and shared their feelings openly. You could see the pain in their faces and hear it in their voices, and yet they still made every effort to be hospitable and make us feel welcome. Some even apologized for not being able to serve us tea or host us in better circumstances.

I was able to help provide over 400 food packs while in Pakistan, and Islamic Relief Canada will continue its efforts to provide clean drinking water, food, shelter, hygiene kits and feminine products for as long as needed. We have so many incredible people working day and night on the ground there, and they will continue to do so until the Pakistani people can return to some sense of normalcy. But we need funds to be able to do it.

Islamic Relief Canada is one of the 12 organizations for which the Canadian government pledged to match donations. We received a matching fund of about $5 million, allowing us to double our impact. But the work is far from over. Millions of houses must be rebuilt from the ground up, an endeavour that will surely take years. We need anyone who is able to donate to the cause.

The time I spent in Pakistan was difficult, but leaving was much harder. I felt guilty departing the country I love—the country that feels most like home to me—during its hour of need. I wanted to stay, to keep helping, but returning to Canada has allowed me to share what I saw with people in this part of the world.

MORE: How to fix our broken health care system

It was only once I left that all of my emotions set in, and I realized I had been going on adrenaline the entire time. I am still grappling with the sadness I felt witnessing so much devastation in Pakistan, a place that holds so many happy and significant childhood memories for me. And that pain is exacerbated knowing this was not just a natural disaster taking its course. This was caused by climate change.

Pakistani people have been through so much, and yet we never lose hope for a better future. Witnessing that hope during my visit, despite all the devastation and tragedy, is what keeps me going. Pakistan will always be home to me, and I’ll continue holding on to hope that things will get better for the people and the place I hold so dear.”

—As told to Mira Miller