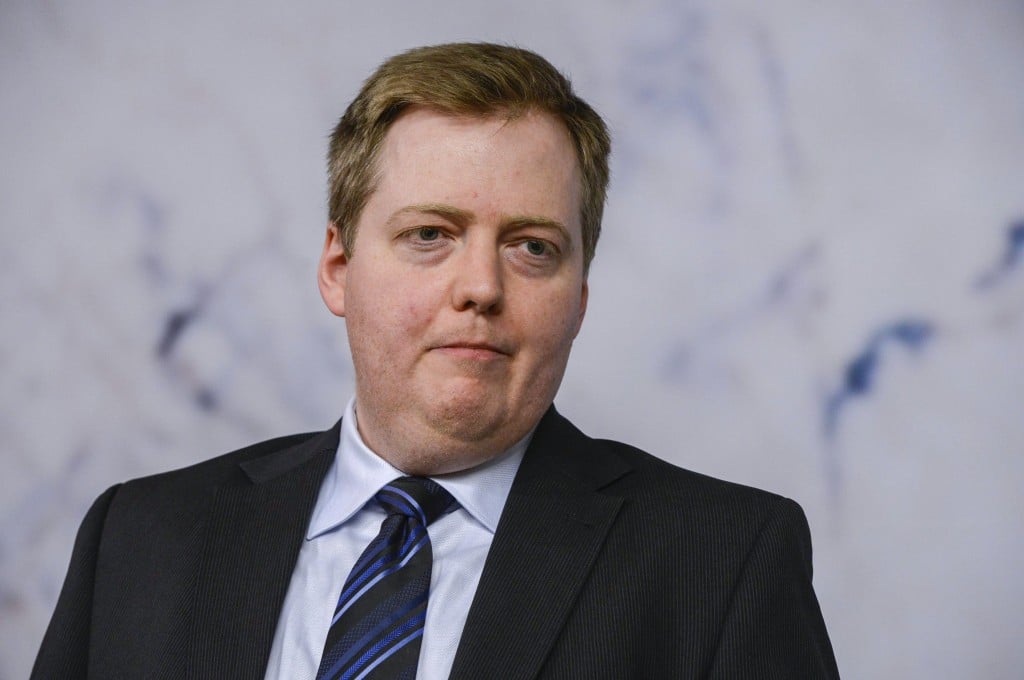 FILE – This is a Wednesday June 19, 2013 file photo Iceland’s Prime Minister Sigmundur David Gunnlaugsson speaks during a press conference in Stockholm. The release of a trove of documents on offshore financial dealings of wealthy, famous and powerful people is raising questions over the use of such tactics to avoid taxes and financial oversight. Reports by a media coalition on an investigation with the International Consortium of Investigative Journalists brought to light details of offshore assets and services of politicians, businesses and celebrities, based on 11.5 million records. Sigmundur David Gunnlaugsson has been named in the documents about offshore financial dealings, (Bertil Enevag Ericson, TT, File via AP ) SWEDEN OUT

REYKJAVIK, Iceland – Iceland’s prime minister insisted Monday he would not resign after documents leaked in a media investigation linked him to an offshore company that would represent a serious conflict of interest.

News reports have alleged that Prime Minister Sigmundur David Gunnlaugsson and his wife set up a company in the British Virgin Islands with the help of a Panamanian law firm at the centre of a massive tax evasion leak. The reports have prompted calls for a no-confidence vote in parliament against him.

Going on Icelandic television Monday afternoon, Gunnlaugsson said he would not resign and added there was nothing new in the information contained in the Panama Papers data leak.

Iceland’s foreign minister also said on a trip to India that the prime minister had not done anything illegal.

“There is nothing strange there,” said Gunnar Bragi Sveinsson, the minister for foreign affairs and external trade.

The revelation concerns the company Wintris Inc., which Gunnlaugsson allegedly created in 2007 along with his partner at the time, Anna Sigurlaug Palsdottir, who is now his wife.

He allegedly sold his half of the company to Palsdottir for $1 on Dec. 31, 2009, the day before a new Icelandic law took effect that would have required him to declare the ownership of Wintris as a conflict of interest.

Wintris lost money as a result of the 2008 financial crash that crippled Iceland, and is claiming a total of 515 million Icelandic kronur ($4.2 million) from the three failed Icelandic banks: Landsbanki, Glitnir, and Kaupthing.

Gunnlaugsson has been accused of a serious conflict of interest. As prime minister, he was involved in reaching a deal for the banks’ claimants.

The opposition has called for a vote against the centre-right government. Protests are scheduled in Reykjavik outside parliament.

“Information on the involvement of current ministers in companies in tax havens was hidden from the Icelandic people before the last elections, and it is only right that they get to appraise the situation again,” Arni Pall Arnason, leader of the centre-left Social Democratic Alliance, told the Morgunbladid newspaper.

Gunnlaugsson, the head of the centre-right Progressive Party, began his four-year term in 2013, five years after Iceland’s financial collapse.

Iceland, a volcano-dotted North Atlantic nation with a population of just 330,000, went from economic superstar to financial basket case almost overnight when its main commercial banks collapsed within a week of one another in 2008.