In Baltimore, will there be riots?

Baltimore's Freddie Gray trials are set to begin, and on the streets everyone agrees on one outcome 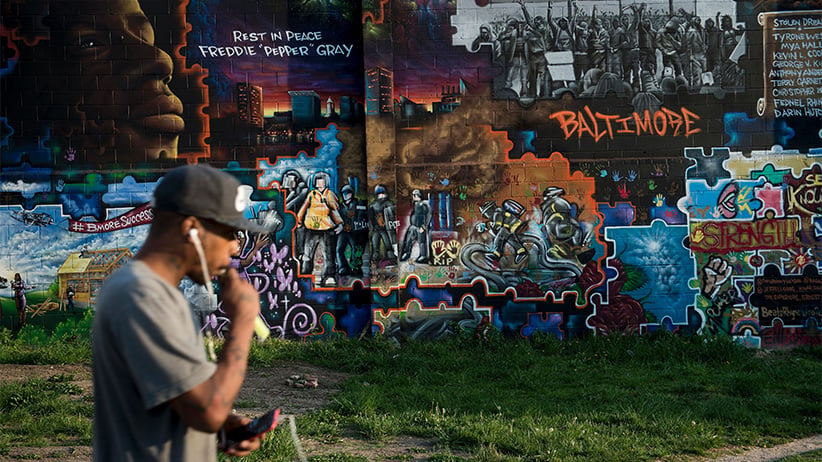 A man walks past a mural dedicated to Freddie Gray April 25, 2016 in Baltimore, Maryland, a year after the protests that were sparked by Gray’s death in police custody. Baltimore agreed last year to pay a $6.4 million settlement with the family of Freddie Gray, whose death in custody sparked riots and looting in the gritty city located near the US capital Washington. (Brendan Smialowski/AFP/Getty)

Carde Cornish the Second was sitting on the steps of the Empowerment Center, prepping his pitching arm. It was a gorgeous day in Baltimore with a warm sun illuminating its 16,000 abandoned houses, its world-class hospitals and universities, its Victorian brownstone architecture, its mouth-watering crab cakes, its appalling toll of street-corner homicides—five more last weekend—and its first-place baseball team.

We were one year removed from the furious, fiery riots that convulsed the town that calls itself Charm City and—this was a universal prediction—a couple of weeks from the next one. Beginning next Tuesday, May 10, three white police officers and three African-American police officers will be put on trial, separately and sequentially, for the alleged rough-housing and “depraved-heart” murder of a 25-year-old arrestee named Freddie Gray in April 2015.

It was Gray’s death from spinal-cord injuries a week after his transportation in a police van, shackled hand and foot but unsecured by a seat belt, that gave hundreds of angry, indigent Baltimoreans an excuse to invade their benighted, boarded-up neighbourhood, burn down the only drugstore in the community, slash the fire hoses that might have saved it, throw rocks and bricks at the authorities, and yet again make their city a synonym for urban calamity and racial division.

So here was Cornish, sitting on the steps of the Freddie Gray Children’s Empowerment Center—a social-services, recreation and employment-assistance hub named post-mortem—and a Maclean’s reporter asking if he would be hurling the first brick should any or all of the constables be acquitted, and Cornish answering, “Yeah, I’ll throw it. I hope it doesn’t happen, but if justice is not done, well, you can’t keep giving people pacifiers and expecting them to never cry again when you take it out.”

“What needs to happen,” Cornish said, “is the city needs to be shut down. Shut down until a drastic change happens in policy and law.”

Cornish described himself as a professional photographer and a passionate skateboarder, and he showed off snapshots of two-year-old Carde the Third. “Everyone I know is murdered or in jail,” he said, noting his own arrest for selling heroin when he was only 18. He said that he was present when the CVS Pharmacy on North Avenue was torched last April, but “only to document the situation.”

The lensman carried a backpack containing a Canon 550D camera and a copy of the famous speech that the ex-slave Frederick Douglass gave in Rochester, N.Y., in July 1852: “The rich inheritance of justice, liberty, prosperity, and independence bequeathed by your fathers is shared by you, not by me. The sunlight that brought light and healing to you has brought stripes and death to me.”

“Nothing has changed,” said Cornish.

“Do you have a weapon in that bag?” he was asked.

Downtown, at a war-memorial plaza overlooked by a larger-than-life bronze statue entitled Negro Soldier, there was going to be a Stand Up Baltimore Rally convened by the Coalition for the Transformation and Betterment of Baltimore. This was happening one day after the Unity March to Remember Freddie Gray and a few hours before the One Baltimore, From Hope to Wholeness interfaith church service.

Related from Maclean’s: Baltimore’s problem is too complex to be black and white

The morning crew at WBAL Radio 1090 predicted that 1,500 people would attend the Stand Up event. When it began, it appeared they had overestimated by about 1,480. Among the few who did show up were a mayoral candidate named LaVern Murray and one of her 15 siblings, an older sister named Joanne. “What do you think will happen if those officers are acquitted?” each woman was asked.

Candidate Murray, a former Army officer, a civil engineer, teacher, ordained minister, author and mother of five, said that, in the case of one or more acquittals, she expects to see “the citizens in disarray and very upset.”

Another attendee was Kevin Davis, Baltimore’s new chief of police (his predecessor, who led the Baltimore police at the time of the riots, was fired). “Are you bracing for more rioting?” Maclean’s asked the chief.

“2015 was the year that policing in America changed,” the chief observed. “The entire country, if not the world, is looking to Baltimore to see if we can combine fighting crime with building a relationship with communities of colour.”

“Do you believe that the police murdered Freddie Gray?” LaVern Murray was asked.

“I don’t know if it’s murder,” she answered. “But there was a huge amount of negligence. If the seat belt was on him, maybe he wouldn’t have died. Maybe. Maybe.”

Related: A timeline of the Freddie Gray riots

In American jurisprudence, the word “maybe”—formally, “a reasonable doubt”—is all that is needed to find a defendant not guilty, whether the charge is littering or murder. But in the impending trials, in which 72 theoretically open-minded and colour-blind jurors will be called upon to pass judgment on five men and one woman in blue, any semblance of reasonableness may be the first casualty.

“There are a large number of citizens of Baltimore city and beyond who believe that all six of the officers are implicated equally in the injury and death of Freddie Gray, irrespective of whatever evidence will be presented,” criminal defence attorney and former Baltimore prosecutor Warren S. Alperstein told Maclean’s. “Jurors are not computers. They are human beings with real emotions. Those folks know that they have to return to their communities, and they possibly could be identified. They have to be concerned.”

It will not take long for the community’s sentiments to be revealed, Alperstein predicted, since the first officer who will be in the dock this spring is a white man named Edward Nero. “I think if Officer Nero is acquitted, there will be many people who, unfortunately, will engage in civil unrest and rioting,” said Alperstein, “and there may be a racial component in that Nero is Caucasian.”

The six cases to be heard are as follows:

State of Maryland v. Edward Nero: second-degree assault, May 10.  Nero was one of three officers who pursued Gray by bicycle and then handcuffed and dragged him along the sidewalk.

State of Maryland v. Caesar Goodson: second-degree depraved heart murder (a charge in which prosecutors do not have to prove intent to kill, just an “indifference” to the potential harm of an act); involuntary manslaughter; second-degree assault; manslaughter by vehicle (gross negligence); manslaughter by vehicle (criminal negligence), June 6. Goodson drove the van in which the shackled Gray was transported and allegedly did not restrain him with a seat belt.

State of Maryland v. Brian Rice: involuntary manslaughter; second-degree assault; manslaughter by vehicle (gross negligence), July 5. Rice was the bicycle patrol officer who first encountered Gray, who had been arrested 20 previous times on various drug and other charges, and observed that Gray was carrying what appeared to be an illegal knife.

State of Maryland v. Garrett Miller: second-degree assault, July 27. Miller joined Nero in pinning Gray’s arms behind his back during his arrest.

State of Maryland v. Alicia White: involuntary manslaughter; second-degree assault,  Oct. 13. White is accused of not calling for a medic.

There are still more twists to this extraordinary saga yet to be played out. Porter already has been tried, last December, but the jury was unable to reach a verdict. This touched off months of legal grappling over the question of whether or not Porter can be compelled to testify against the other five defendants. Last month, the Maryland Court of Appeals ruled that, yes, he must.

“What is unusual here is having six separate trials and the question of the compulsion of testimony,” Shan Wu, a criminal-defence lawyer and former federal prosecutor in Washington, told Maclean’s. “I think that the causation of the injuries should not be a tough case to prove. I am sure that the state will have good forensic evidence showing how the injuries were caused. But the question of who was in charge and who did it and who is going to talk about it is very different.”

Wu said he did not expect the Court of Appeals ruling to be the final word on compelling one officer to testify against another; “I don’t think this trumps the Fifth Amendment against self-incrimination,” he observed.

Back at the Freddie Gray Empowerment Center, Cornish was reprising what Frederick Douglass called “the plaintive lament of a woe-smitten people.” He labelled the 2015 Baltimore riots “the awakening” and said “it doesn’t seem real, until it happens where you are. Until it happens to you.”

Nearby was a small blue sign on a Baltimore lamppost, faded from years in the sun. LAWBREAKERS BEWARE, it said.