In Europe, states challenge austerity but lack cash to spend

Economic growth in the eurozone remains a struggle 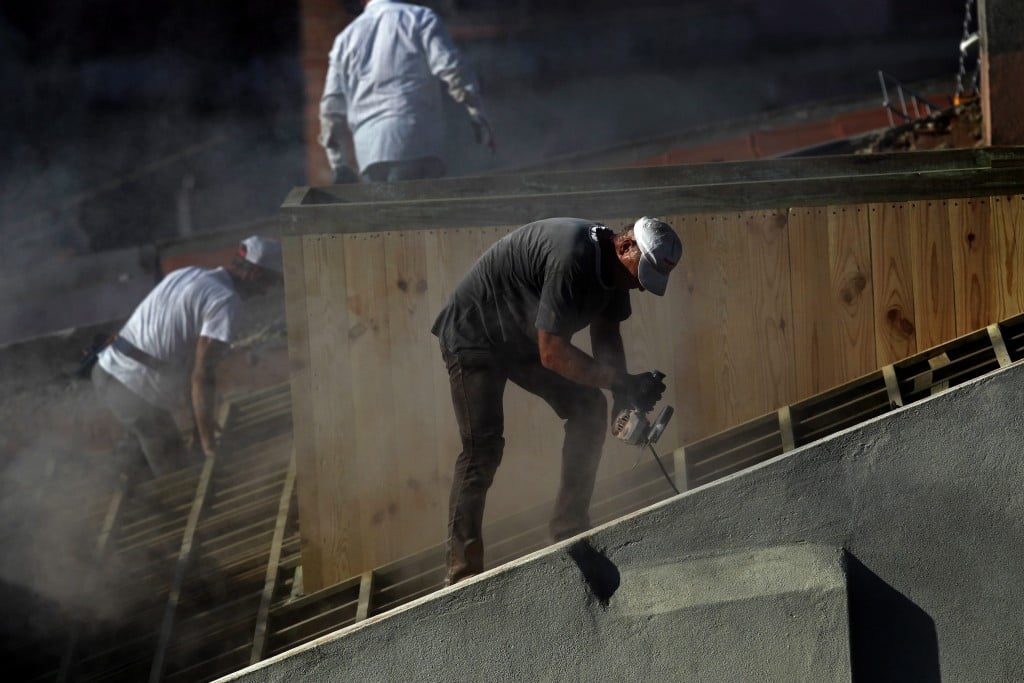 Construction workers work on the roof of a building in Lisbon, Thursday, July 4, 2013. (AP Photo/Francisco Seco)

LISBON, Portugal – The construction cranes poking up from the jumble of terracotta roofs on Lisbon’s skyline can be counted on one hand – a dismal reminder for Ricardo Gomes of how little work there is for his construction company.

The Portuguese Socialist government has promised to change that, advocating an end to Europe’s years of budget austerity by increasing spending and cutting taxes. Even respected independent policymakers, like the president of the European Central Bank, have said governments should do more to support growth.

But there’s a catch: despite an easing in Europe’s focus on austerity, countries like Portugal or Italy that need to increase spending to boost economic growth can’t afford to do so without breaking the bloc’s rules. And those that can, mainly Germany, are still penny-pinching.

“There are obvious limitations” in Portugal’s ability to finance its economy, says Gomes, CEO of construction company SETH.

The country’s construction sector collapsed amid the financial crisis, which saw the state take a 78 billion-euro ($87 billion) bailout in 2011. The number of construction workers has more than halved from 612,000 in 2005 to roughly 277,000.

Portuguese officials hope tax cuts coming into force this month will put more cash in people’s pockets, generating a spurt of domestic demand and firing up the wider economy.

That might have a modest impact, concedes Gomes, but he’s not expecting a big pay-off for firms like his. Capital is still too scarce for big, job-creating investments, he says.

The average price tag of a public works project in austerity-minded Portugal last year was a measly 89,000 euros (currently $99,000), according to sector association AECOPS. Public investment is being cut by a further 5.6 per cent this year as the government strives to meet the eurozone’s demand for a budget deficit below 3 per cent, from an expected 4.3 per cent last year.

Private investment is faring no better, as caution reigns: After years of handing out poorly judged loans, Portuguese banks are sitting on close to 18 billion euros of bad debt. That’s roughly equivalent to 10 per cent of the country’s gross domestic product.

With the national economy stalled, Gomes’s company, which specializes in coastal and port engineering, has survived by going abroad – 80 per cent of its business last year was in Africa.

The situation is similar in many of the economically weaker parts of the 19-country eurozone.

Italy is challenging Germany’s focus on debt reduction head on, arguing that spending more would help the economy.

“Europe has taken the wrong road, austerity alone is not enough,” Premier Matteo Renzi wrote in an open letter last month. Italy’s economy slowed in the fourth quarter of last year and government debt is the highest in the eurozone after Greece at 135 per cent of GDP.

Renzi pointed to the example of the United States, whose economy is profiting from a focus on growth and innovation and where President Barack Obama said last year he wanted to “replace mindless austerity with smart investments.”

But unless Italy wants to break the EU rule to keep the deficit under 3 per cent of GDP – a rule his country signed up to – there is little he can do to increase spending.

The eurozone economy needs growth any way it can get it. It expanded a meagre 0.3 per cent in the final three months of last year, for the second quarter running. The average unemployment rate is 10.3 per cent.

The European Central Bank has for more than a year been trying to stoke growth by shovelling huge amounts of money – more than 1 trillion euros – into the eurozone economy through the purchase of bonds. But as demand for credit remains weak, this monetary approach isn’t paying the anticipated dividends.

National governments, ECB officials keep saying, need to do their bit, too. ECB chief Mario Draghi said last month: “It is becoming clearer and clearer that (governments’) fiscal policies should support the economic recovery, through public investment and lower taxation.”

Increases in government spending and tax cuts are commonly viewed as tonics for listless economies. But Oxford Economics, a consultancy company, noted last month that eurozone governments are juggling political and financial considerations: “Germany has (fiscal) space but lack of inclination; the opposite is true in France (and) Italy.”

The Paris-based Organization for Economic Cooperation and Development, a respected policy group that represents the world’s most developed economies, has also thrown its weight behind a move away from austerity as soon as the opportunity arises.

“What has changed is that over the past year, eurozone governments have started to openly question” the wisdom of Brussels and Berlin’s policy strictures, said Simon Tilford of the Centre for European Reform, a think-tank in London.

In Portugal, Finance Minister Mario Centeno, who has a PhD in Economics from Harvard University, is introducing income tax and sales tax cuts, tax rebates, new subsidies for household energy bills and restoring government workers’ pay that was cut. Those steps, he says, will stimulate consumption.

Eurozone officials initially reacted with alarm at the moves, considering Portugal’s debt is high at 130 per cent of GDP, but after some tinkering allowed the spending plan to go through.

Nevertheless, “Portugal alone can’t really do that much” to hasten a recovery, Tilford of the Centre for European Reform says. “It really needs Italy, France and Spain to put up a united front and demand fundamental change in the way the eurozone is run.”