In Gaza, ceasefire talks wind down as Monday deadline nears

Gaps between Israel and Palestine are 'still significant,' with talks revealing divisions riven among the Palestinians 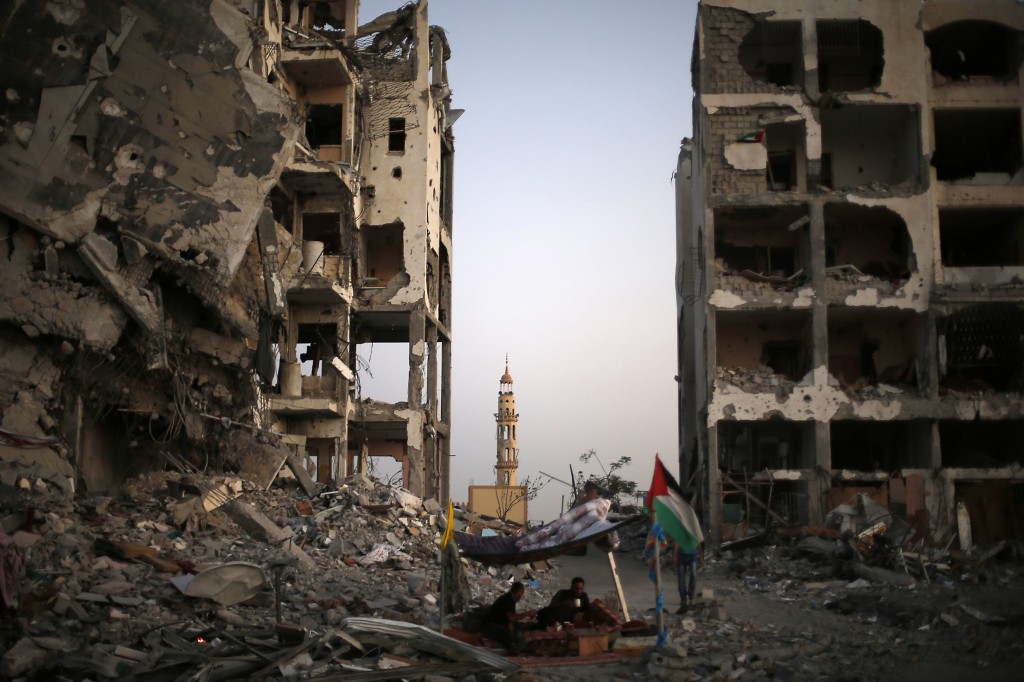 Palestinians sit in a tent outside their apartments, which witnesses said were destroyed in an Israeli offensive, during a 72-hour truce in Beit Lahiya town in the northern Gaza Strip August 11, 2014. (Suhaib Salem/Reuters)

CAIRO, Egypt — The Palestinians appeared divided Sunday as the clock was winding down on the latest Gaza cease-fire, with officials saying Hamas was still opposed to a compromise Egyptian proposal that would ease the closure of the territory, while other factions, including delegates representing President Mahmoud Abbas, were inclined to accept.

Hamas officials said they were holding out in hopes of getting more concessions in the Egyptian-mediated talks. With a temporary truce set to expire late Monday, a range of outcomes remained possible, including a return to fighting that has brought great devastation to Gaza, an unofficial understanding that falls short of a formal negotiated deal or yet another extension in negotiations.

The negotiations are aimed at ending the latest war between Israel and Hamas-led militants in Gaza. Nearly 2,000 Palestinians have been killed — mostly civilians — and more than 10,000 people have been wounded since the war began July 8, according to United Nations figures. In Israel, 67 people have been killed, all but three of them soldiers.

The indirect talks have been going on, through Egyptian mediators, since early last week. As Palestinian and Israeli negotiators returned to Cairo on Sunday following a weekend of consultations across the Middle East, the gaps remained wide.

The current five-day cease-fire is due to end Monday night at midnight (2100 GMT).

A member of the Palestinian delegation told The Associated Press on Sunday that the gaps between the sides were still significant and that it was far from certain whether a deal could be reached before the cease-fire expires.

“We are less optimistic than we were earlier,” he said, speaking on condition of anonymity because he was not authorized to discuss the talks with the media.

Hamas is demanding an end to an Israeli-Egyptian blockade on Gaza tightened when it seized power in 2007. The blockade, which Israel says is needed to prevent arms smuggling, has ground Gaza’s economy to a standstill by restricting imports, limiting the movement of people in and out of the territory and blocking virtually all exports.

Israel, meanwhile, wants Gaza to be demilitarized, essentially forcing Hamas to give up its large arsenal of rockets and other weapons. Hamas rejects this demand out of hand.

Ahead of the resumption of talks late Sunday, both sides were sticking to their positions.

Israeli Prime Minister Benjamin Netanyahu told his Cabinet that Hamas had suffered a huge setback in the four-week war, which would be reflected in the Cairo talks.

“If Hamas thinks its defeat on the battlefield will be papered over by a victory at the negotiating table it is mistaken,” he said.

“The Israelis will only return to their homes when the resistance decides. We are not seeking an agreement because we are weak but to fulfil our people’s demands,” he told a rally.

According to negotiators, the Egyptian proposal calls for compromises by both sides. It seeks to ease the blockade by allowing more imports and exports for Gaza, and increased movement of people in and out of the territory’s Israeli-controlled crossing.

But key demands, such as Hamas’ calls for Gaza’s air and seaports to be reopened, are to be left until later.

While Gaza would not be forced to disarm, Gaza’s border crossings would be controlled by forces loyal to Abbas. The Western-backed Abbas would also oversee international reconstruction efforts in Gaza, to make sure that aid money and materials don’t fall into the hands of Hamas.

The Egyptian compromise would give the Western-backed Abbas his first foothold back in Gaza since his forces were driven out seven years ago.

In a show of unity, the Palestinian delegation in Cairo has included representatives of rival factions, including Abbas’ Fatah movement and the smaller militant group Islamic Jihad.

One member of the delegation said that even if Hamas opposes the deal, Abbas’ forces are prepared to oversee the crossings and reconstruction.

“We won’t let our people down,” said the official, speaking on condition of anonymity because he was not authorized to discuss the negotiations with the media.

Other members said both Israel and Hamas appeared to be posturing ahead of Monday night’s deadline. One positive sign was that neither side appeared to have any desire to return to the heavy fighting experienced over the past month.

“The proposed agreement is not bad and can be amended a little bit. That prevents bloodshed and opens the way for rebuilding Gaza,” said one official, also speaking on condition of anonymity.

The current round of fighting began after Hamas resumed firing rockets at Israel following the arrests of hundreds of Hamas members in the West Bank. Israel said the arrests came as part of the investigation into the abduction and killing of three Israeli teens in June.