In Ireland, an orange rage continues to burn over the Twelfth

In Northern Ireland, sparks between Catholics and Protestants are still everywhere, alight

In Northern Ireland, July 12 is commemorated by the burning of Irish flags, and the marching of Orangemen through the streets. This year’s celebrations, captured by Toronto photographer Paul Colangelo, were not marred by the often deadly clashes between Protestants and Catholics. Nonetheless, there are still some bubbling tensions: “It’s still referred to as a mixed marriage when a Catholic marries a Protestant,” says Colangelo.

July 12 is known as Orangeman’s Day, or simply the Twelfth. It commemorates the Glorious Revolution of 1688 when William of Orange defeated James II and began the Protestant Ascendancy in Ireland. The bonfires, some more than 30 m high, are lit the night before by Protestant youth. The massive structures are fiercely guarded by young Protestants—sometimes affiliated with now disbanded paramilitary groups—while young Catholics try and burn the structures before July 11.

This year, three Belfast homes were damaged by out-of-control fires. Hardliners on both sides are attracted to the festivities, and while many of them are too young to remember the 1998 Good Friday Agreement, hatred and anger are passed down through generations.

“After a few drinks I had one young guy screaming, ‘F–k all Catholics.’ Another guy walking by yelled, ‘F–k the Pope,’ ” says Colangelo. The fallout from Brexit could reopen old wounds. Northern Ireland voted 56 to 44 per cent to stay in the European Union, and now there’s talk of a referendum to join Ireland. 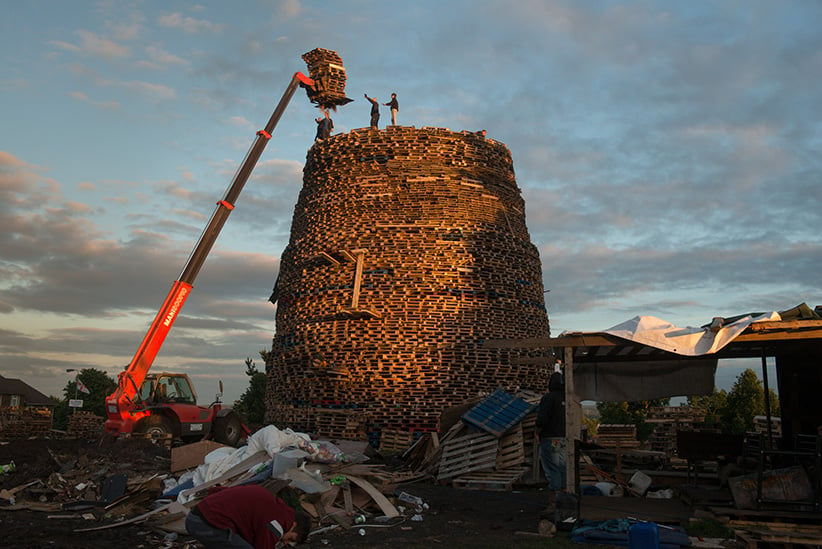 The bonfire in Ballymacash, Lisburn was one of the tallest in Northern Ireland in 2016. (Photograph by Paul Colangelo)