In Sichuan, it’s all better now

No one can deny the Chinese have spent billions on rebuilding in Sichuan. But money isn’t everything. 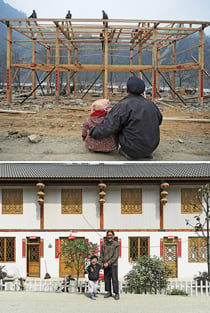 In the centre of the page on A8 of the New York Times on Friday, Sept. 30, nine giant pandas sat in a field of almost impossible green. Some slouched in that fat-baby way pandas have. Others chewed grass. Together, they offered an image of bucolic perfection. The picture was in the centre of a full-page ad paid for by the People’s Government of Sichuan, the Chinese province devastated by a powerful earthquake in 2008. Alongside images of pristine houses, smiling children and new roads, the bears presented an unequivocal message: everything here is awesome now.

The earthquake was a disaster in many ways, including, for the government, public relations. Dozens of schoolhouses collapsed in the quake, which killed about 90,000 people. Questions about shoddy construction, tied to corruption or incompetence, dog officials to this day. The ad was clearly an attempt to show the other side. Captions to the photos boast of 12 million people resettled, 3,000 schools rebuilt and over 3,000 babies born since the disaster occurred.

No one can deny the Chinese have spent billions on rebuilding in Sichuan. But as recent high-speed rail disasters have shown, money isn’t everything in China. Graft and a rush to get the work done have plagued large projects in that country for years. Slick advertising is one thing—buildings that can withstand a significant shake are another. For the people of Sichuan, only the latter will count in the long run.