Indiana's elephant in the room

The tables have turned in favour of gay rights in America. The Republican Party is another matter. 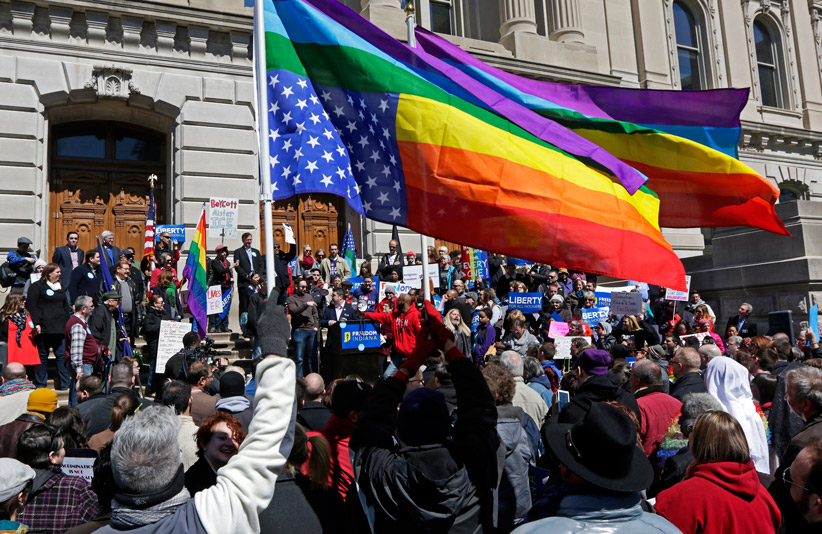 Early last week, even before Indiana lawmakers amended their controversial religious liberties bill to address concerns it could be used to discriminate against gays and lesbians, state Gov. Mike Pence admitted he was caught off guard by the fierce national backlash.

That backlash included not only legion of gay rights activists but big business—from Angie’s List to the Indiana Chamber of Commerce—and sports behemoths like NASCAR and the NCAA. In a blistering Washington Post op-ed, Apple’s Tim Cook called the law “dangerous.” Marriott’s CEO dismissed it as “pure idiocy from a business perspective.” Boycotts and travel bans to Indiana were threatened.

Yet when asked whether he’d expected the legislation to become a flashpoint in the American culture wars, the Republican governor’s response was: “Heavens, no.” In his view it was a carbon copy of similar laws either already established or currently being implemented across the United States.

He shouldn’t have been so shocked.

Indiana’s Religious Freedom Restoration Act (RFRA) was approved by Pence at a tipping point in the United States for gay rights. Same-sex marriage bans are crumbling across the country and the U.S. Supreme Court will review cases from four states—Kentucky, Michigan, Ohio and Tennessee—later this month. Same-sex marriage activists see a favourable ruling in the nation’s highest court as being the final victory for their cause.

It was in that context that Pence first signed Indiana’s RFRA in late March, flanked by three social conservative activists who helped shepherd the bill into law, which prohibits government entities from “substantially burdening a person’s exercise of religion.”

Denis Dison, a senior vice-president with the non-partisan Gay and Lesbian Victory Fund, which helps elect LGBT people to public office, says the sea change in the courts and public opinion on gay marriage scares some in America’s religious right. “They’re lashing out in ways like this to prevent it from happening fully,” he said. In 2015, 12 states, including Indiana, have introduced or sought to amend RFRA legislation, a move seen by many as a reaction against same-sex marriage now being legal in 37 states and D.C.

The shift in the U.S. public’s attitude to gay marriage in recent years has been rapid, from 40 per cent in favour in 2008 to 55 per cent now. That sudden change has left Republican politicians grappling with how to handle increased support for gay marriage—even from among many conservative and religious voters—with fierce opposition from a shrinking but still influential branch of the party. Leaders like Pence and Arkansas Gov. Asa Hutchinson, who also sent lawmakers back to the drawing board for his state’s new RFRA (and admitted his own son opposed the religious liberty bill), are being forced to walk a fine line between placating an active political base and appeasing public backlash.

Still, Dison says the party’s in for an uphill battle because “for a long time, the religious right has been a very important part of their coalition.”

In the United States, gay activism and the religious right movement have their roots in the cultural hurly-burly of the late 1960s and ’70s—gay activists finding a spark in New York’s 1969 Stonewall riots and social conservatives in court battles like the landmark 1973 Roe v. Wade abortion ruling, says Phil Tiemeyer, an associate history professor at Philadelphia University. “Basically, those two movements arose together in the United States as almost equal and opposite political adversaries,” he says.
By the 1980s, the gay rights movement was adopted—if not yet as fully embraced as it is today—by the left. (Barack Obama, for example, only came out in favour of gay marriage in 2012.) And the religious right had found champions in the likes of evangelical pastor Jerry Falwell and solid support within the Republican Party under Ronald Reagan.

Since then, Tiemeyer says, pointing to the outcry against Indiana’s RFRA, the tables have turned. “The LGBT movement has more of the upper hand in terms of public opinion and in terms of where corporate dollars are going to face their support.”
Meanwhile, the Republican Party—seeking to be more inclusive after presidential losses in 2008 and 2012—has acknowledged the need to expand its appeal and has pinpointed gay rights as one of the issues to address. In 2013, the Republican National Committee admitted “there is a generational difference with the conservative movement about issues involving the treatment and the rights of gays—and for many younger voters, these issues are a gateway into whether the party is a place they want to be.”

Republican presidential hopefuls for 2016 are now being forced to address the issue, and have been vacillating between full-throated support of the religious freedom law—Texas Sen. Ted Cruz said he was “proud to stand with Mike [Pence],” and Rick Santorum declaring “I stand in defence of religious liberty and real tolerance”—to the more cautious tones of Jeb Bush: “In a big diverse country like America, we need to have space for people to act on their conscience.”
Others, like Kentucky Sen. Rand Paul, a libertarian-leaning social conservative with a youthful following, ducked the issue altogether.

Gregory T. Angelo, executive director of the Log Cabin Republicans, a nationwide organization representing gay conservatives, noted “there’s an understanding among more shrewd Republicans that if you’re not in support of LGBT equality issues yet, the most politically savvy approach is ‘do no harm’ and say nothing at all.”

But Angelo, who says he feels warmly welcomed within the party except by “a fringe on the right who do not believe that gay and conservative can go together,” doesn’t think the Indiana RFRA fallout will haunt Republicans in 2016. “I would hope the Indiana situation will be a canary in a coal mine for the 2016 GOP presidential field, in that a strident opposition to gay rights, or exclusively pushing religious liberty legislation at the potential expense of the LGBT community, is not going to pass most Americans’ political smell test.”

After watching their counterparts in Indiana and Arkansas being raked over the coals, lawmakers in Nevada and Georgia have, for now at least, backed away from their own proposed RFRA legislation. A handful of other states are going forward, including North Carolina (despite Republican Gov. Pat McCrory’s opposition to the legislation introduced in the legislature led by his own party).

Groups like Human Rights Campaign, which led the charge on Indiana’s RFRA law, are committed to keeping what they call “anti-LGBT” legislation in the national spotlight, forcing Republican politicians across the country to address the issue, whether they want to or not.