The Republicans' convention has shown new depths of the Trump we know—and obscures the real fright: that there's a Trump we still don't 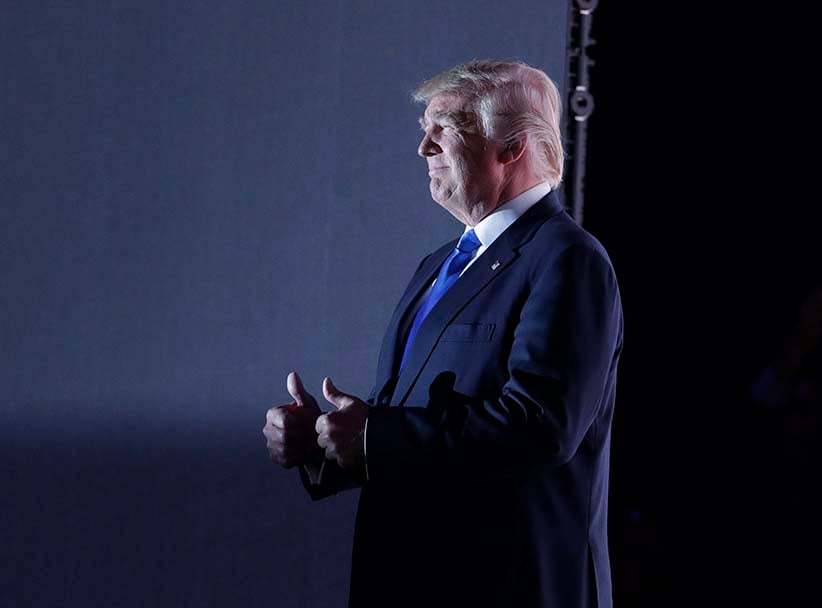 America, that great land of plenty, is suddenly short of words. In the midst of the turmoil that is the Republican National Convention in Cleveland, Ohio—or, more properly, the Trump Convention—finding the right words to describe how the country got here is proving difficult. Even Donald Trump Jr. called it “surreal.”

David Frum, the senior editor at the Atlantic and now part of the crew of disillusioned Republicans set adrift on a kind of rickety, Kon-Tiki-like voyage in hopes of finding the land of political sanity, told me there is only one way Trump can heal the rifts in the party: Trump would have to get in a time machine, go back 30 years and relive his life in a totally different way.

It has come to that. For Frum, and other Republicans like George Will, the Bush family, and John Kasich, all of whom are not even attending the convention, wishing for time machines qualifies as a real option.

The Trump camp itself—perhaps surprised by their own unlikely ascension—is at a loss for words, so much so that Melania Trump resorted to borrowing some for her convention speech from Michelle Obama’s 2008 address. The controversy over that speech engulfed day two of the convention, even as Trump made history and formally became the nominee. The plagiarism allegation revealed the disarray of the Trump campaign and has been a total disaster, undermining the positive effect the speech might have had, given that Melania exceeded expectations in terms of her delivery. Ironically, though, it had the unintended consequence of dousing other potential political fires. The attempted delegate revolt against Trump might have exploded into something bigger but it fizzled. Meanwhile, it was hard to focus on comments by Republican Representative from Iowa, Steve King, who gave a spirited defence of what he called “the old, white people business,” comments that, under normal circumstances, would be a career ender. Because everything is so fraught with vicious partisanship here, I’ll just print the whole exchange, to let you decide how it went.

Steve King: This ‘old, white people’ business does get a little tired. I’d ask you to go back through history and figure out, where are these contributions that have been made by these other categories of people that you’re talking about—where did any other subgroup of people contribute more to civilization?

So at the very least Melania took attention away from the big white Republican tent. Given that the biggest challenge for Trump is attracting non-white voters, this was likely not a terrible thing. In the new political math of the Trumpian world, copying is less damaging than nativism. The most quoted statistic before the convention compared the white vote of Ronald Reagan to that of Mitt Romney. Reagan won a majority with 44 states with about 56 per cent of the white vote. Romney, however, won only 24 states and lost badly—while actually winning 59 per cent of the white vote. So, even though Trump is bringing in new white voters—and he is—he needs to expand the tent to include the, er, ”sub-groups.”

“Right now the Trump coalition is comprised of the angry, those dispossessed of hope,” says Nik Nanos, chairman of Nanos Research. “To win, he needs the moderate Republican establishment which now—battered through the nomination process—is waiting to see where Trump wants to take the party.”

That is the nuclear question. Where does he want to take the party, and by extension, the country? By now, Trump’s radical views of immigration, Islam, Mexicans, NAFTA, China and security are well known. To his critics they are frightening, xenophobic and nativist; to his supporters, they are candid, straight-talking truths. But there is a persistent delusion that Trump will soon moderate his views in order to woo the larger electorate in the general election. Pundits swoon over tiny details as if they somehow signal a new centrism. When Trump used a teleprompter, it was seen as a sign that the wild horse was finally been tamed. When Trump marginally moderated some of his most extreme views, saying he won’t ban all Muslims from coming to America, only people from certain “territories”—others will get in only after “extreme vetting,” whatever that is—it is seen as the start of the inevitable bend to the centre. 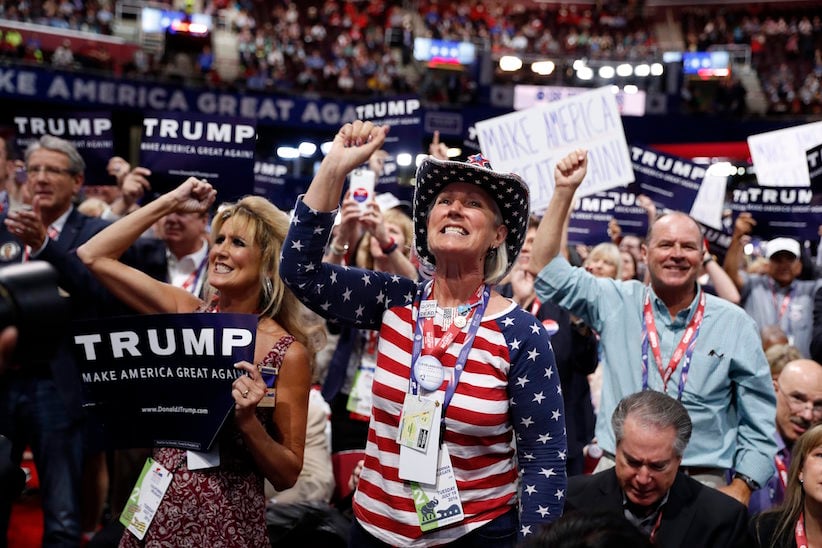 Hope for a new, more palatable Trump is a delusion. He is not changing. It also misses the real danger: his unpredictability. Trump has never been and will never be consistent. He has no political framework, he is willing to change his views, ideas, and policies on a whim. His policy views are not derived from an ideological principle, so much as from a mood ring.

That is what makes him so frightening. What he says one day can radically change another. He is capricious and moody, untethered from logical consistency, so bloated by wealth, success and years of the good life that the only thing thin about him is his skin. That makes for an overly reactive political leader. Trump, a bully in a suit, is a curator of insults and revenge, and it means if he ever had power no one could predict how he would react.

Trump lashes out at his critics, preferring name-calling to policy debate. In a bad mood he might tweet a series of nasty jabs at CNN or “Crooked Hilary” and then, as if he’s not in the middle of a presidential race in a country seething with racial tension over gunned down African Americans and assassinated police officers, he’ll tweet about his golf resorts. It’s almost head-snapping to follow. Here are few tweets from one day this week. It starts with another personal attack on Clinton.

“Crooked Clinton is bought and paid for by Wall Street, lobbyists and special interests. She will sell our country down the tubes!” 2016-07-16 9:23am

That was followed by a short tweet about his new VP pick, Governor Mike Pence. Then, at 11:15pm that night, his third tweet went to some bikers:

“Thank you to Chris Coze and Bikers for Trump-your support has been amazing. I will never forget. MAKE AMERICA GREAT AGAIN!”

Ok. Fine. Thank your supporters. Smart. But then, six minutes later, at 11:21pm, Trump suddenly shifts from politics to golf, from presidential candidate to resort promoter:

“Great news! We’ve been nominated for Ireland’s Best Golf Hotel 2016. We would appreciate your vote. Worldgolfawards.com/vote/trump…”

What is he doing at close to midnight? Reading his Twitter feed is like reading the feed of a kid who has closed the bar after a bad breakup and his buddies have yet to take his phone and car keys and tell him to cool off.

The convention has been like a political version of Pokémon Go, an augmented-reality version of Trump’s Twitter feed. Night one featured the former New York City Mayor Rudy Giuliani in performance—it was hard to call it a speech, because the ratio of gesticulation to actual words put it more in the camp of rhythmic facial gymnastics. Rudy was furious, railing against Clinton in an almost frothing manner, but at least we got what we expected. The crowd whipped up. The Trump camp has a case—and one that ought to be taken seriously—that America is deeply divided and that Hillary Clinton, who even Democrats can barely tolerate, is not a uniting figure. It is foolish to dismiss the feeling of anger and distrust aimed at Clinton. And it is uniting some Republicans.

So America’s mayor was no surprise. What was chilling was the speech from Lieutenant General Michael Flynn, whose metallic, mean delivery of anti-Hillary Clinton screed ended with the chant of “Lock her up.” Clinton’s use of personal emails and her role in the Benghazi killings are, for Republicans, a far more wretched crime than the fiasco that was Bush war in Iraq, a war most of the Republicans on stage, outside of Trump himself, supported. But it is never mentioned. There is some kind of weird, moral equivalency between the lack of security at the U.S. embassy in Libya and the entire Iraq war that was, by Trump’s own admission, based on a lie. As the crowd chanted wildly to “lock up” Clinton—and they did it again on night two as Chris Christie spoke—the fear coalesced into one word, a word I had to look up to describe the mob mentality that was sweeping the convention floor: Ochlocracy.

It is, admittedly, an obscure word, but since what we are seeing is so unprecedented, reaching for the dictionary isn’t the worst impulse. Ochlocracy means “mob rule” and comes from the Greek word “okhlos,” which is the word for crowd or mob. The American, white okhlos was in full force at the RNC, stoked by Trump’s willingness to say anything, freed from those old conventions of discretion, propriety and responsibility. This is scorched-earth politics. Say-anything politics. The politics of mood and meanness and mobs.

MORE: Scott Feschuk witnesses the fight of the megaphone men

Trump rarely gives any details of his policies—how he would build a wall across the Mexican border, how he would defeat ISIS, where his alleged new intelligence would come from to defeat ISIS—but the vagaries and simplicities are the whole point of politics as performance art. It is not the destruction of Republicanism we are seeing—something Frum so fears—so much as a destruction of politics as we know it, an end to the set of unwritten political conventions that protected us from excess and demagoguery. A campaign that believes in nothing can believe in anything it wants, and that is the great fear.

The purpose of stacking the RNC convention with speeches from Trump’s family-his wife and kids—is to humanize him, of course. But what do we expect? A monster? No. Trump is a man who has children who love him. Why not?

“For those who don’t vote, it is mostly because they don’t think voting will cause any change and Trump looks so different, he brings more of those people out,” says the chairman of Abacus Data Bruce Anderson. “Trump might actually be responsible for one of the largest turnouts ever, both with those who want his version of change and those who fear it.”

To try to understand Trump’s appeal, I asked Anderson what makes people vote for candidates. He said the starting point for most voters is usually a search for a candidate whose values and world view correspond to their own. “For some, maybe most, this is simply a question of voting along party lines,” Anderson says. “Clinton disappoints some in her party, Trump scares some in his, so it remains to be seen how that shakes out.”

But there is, according to Anderson, a part of the population who get into issues—the so-called swing voter. “There are two to four issues that are more context than policy issues that seem critical now: keeping Americans safe, being strong in dealings with the rest of the world, breaking up the rigged system (money/special interests) in D.C., and these could be considered swing voters based on issues,” he says. “But this is a smaller factor. “

The great fear about Trump is not what we already know about him. The great fear is what we don’t know. What he might he do if insulted. How he might act. Who he will he turn on next. The media? His opponents? Who will be “locked up”? It is the unknown Trump that is the cloud hanging over the convention in Cleveland, and over the next presidency of the United States of America.