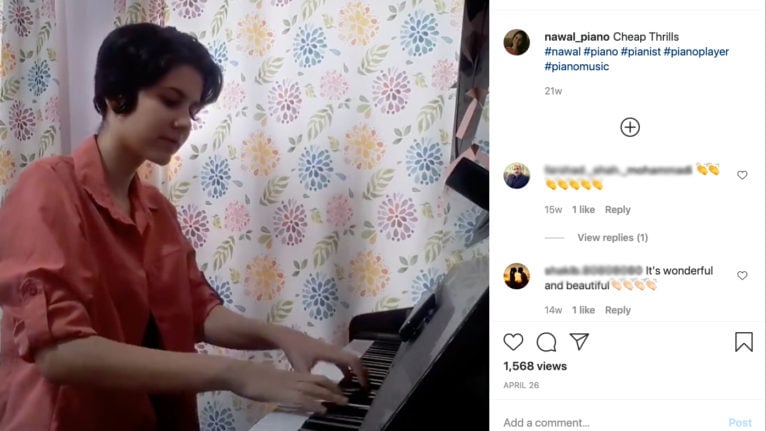 Maybe it was the piano. Maybe that explains it.

Maybe it was because 15-year-old Nawal Talebi had come to the attention of the authorities after she’d posted videos on Instagram playing Beethoven’s Sonata No. 1, Opus 2, with the same lively grace and dexterity as her rendition of the Grammy-nominated synth-pop number “Cheap Thrills,” composed by the Australian singer-songwriter Sia Kate Isobelle Furler.

Maybe that was the pretext when the police arrested her parents on Aug. 23, because among the possessions they ended up hauling away in a truck was the family’s upright piano. Nawal’s father Hooshmand, and her mother Mojdeh, remain in prison, in the Iranian city of Isfahan. Hooshmand is in Dastgerd prison. Mojdeh is in Dolatabad prison. That’s all anybody knows.

They still haven’t been allowed to talk to a lawyer. No charges have been filed against them. They are not allowed visitors. In the meantime, Nawal and her 13-year-old brother Nadin have been taken in by their aging widowed grandmother. The school year has just begun, and they are terrified.

RELATED: To those who have perished since the Iranian Revolution

Maybe it was because of the piano. Or more likely, it’s not that complicated.

“It is just because they are Baha’i,” Nawal’s aunt, Soheila Talebi-Eskandari, who lives in Coquitlam, B.C., told me. Geoffrey Cameron, director of public affairs for the Baha’i Community of Canada, told me the same: it’s just because they are Baha’i. Over the summer, dozens of Baha’i people were arrested, summoned to court or imprisoned solely because of their Baha’i faith in Isfahan, Shiraz, Yazd, Kermanshah and other Iranian cities.

The arrests are being carried out in an unprecedented wave of state terror the Khomeinist regime has unleashed upon Iran’s ethnic and religious minorities, notably the country’s Baha’i people, the Kurds, Ahwazis, Azerjbaijanis and Balochis.

The repression is of a piece with a massive crackdown on dissent in Iran that has been overshadowed by debates and controversies related to reverberations from the Trump administration’s “maximum pressure” policy; by the January drone strike in Iraq that killed the Iranian major general Qasem Soleimani, commander of the terrorist-listed Quds Force; and by the ongoing collapse of the multilateral nuclear rapprochement concluded in the dying days of Barack Obama’s U.S. administration.

In Canada, the regime’s ever-deeper descent into barbarism has been eclipsed by the Islamic Revolutionary Guard Corps’ “accidental” missile attack on a Ukrainian airliner in January that resulted in a crash that killed all 176 people on board, among them 55 Canadian citizens and 30 permanent residents of Canada. After an eight-month delay, on Sept. 1, Global Affairs Canada finally served Iran with a class-action suit arising from the incident, against regime authorities. 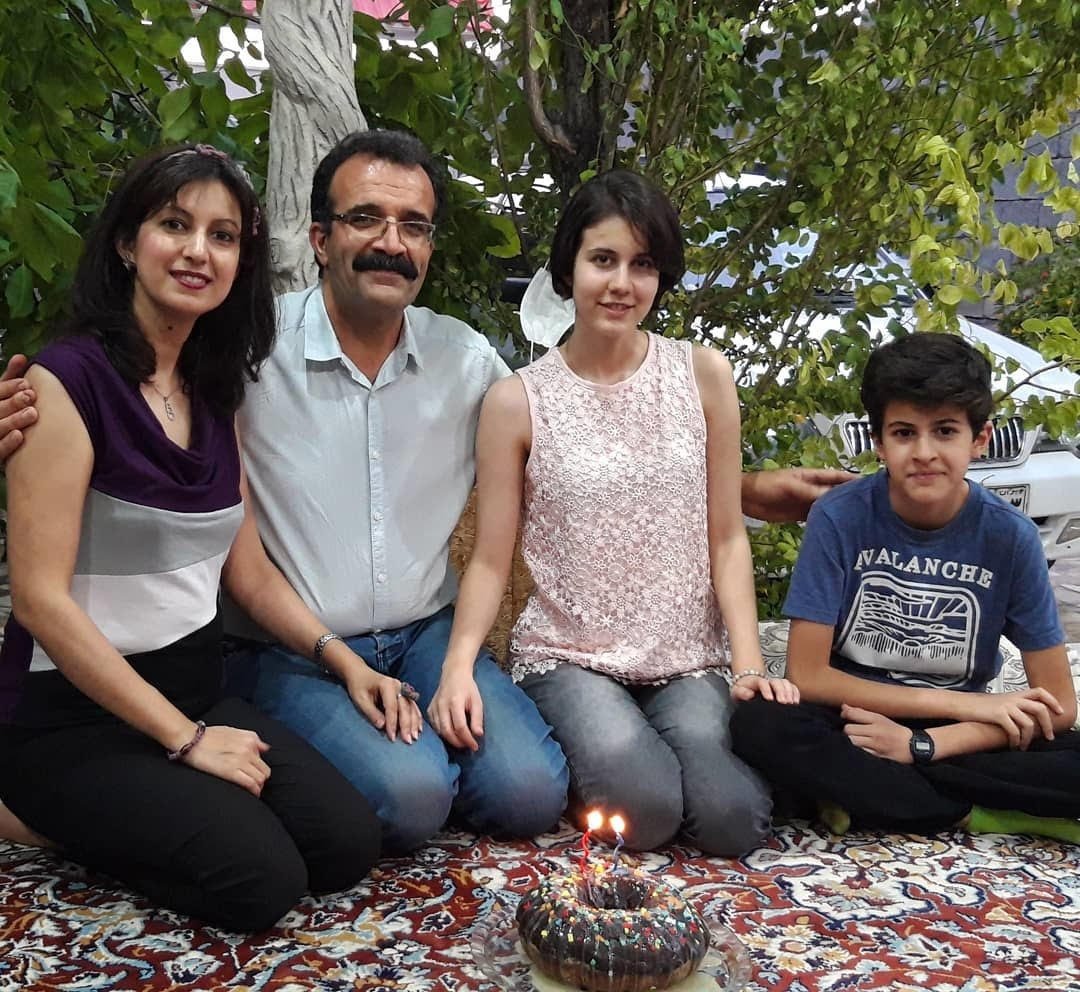 From left: Mojdeh and Hooshmand Talebi, with their kids, Nawal and Nadin

Just this past weekend, the Trump administration, after abandoning the six-nation Joint Comprehensive Plan of Action (JCPOA) two years ago, announced a unilateral revival of the entire corpus of the pre-JCPOA UN sanctions on the Iranian regime, leaving Russia, China, the United Kingdom, France and Germany to sort out what to do with the remnants of the deal. The big dilemma facing corporate entities is whether to risk the commercial penalties the U.S. can unilaterally impose for continuing to do business with the regime.

Despite the complaints UN secretary-general Antonio Gutierrez has registered with the U.S. over its latest moves, the JCPOA was dead by last weekend anyway. Iran has been loudly and deliberately reneging on its commitments to the point that two weeks ago the International Atomic Energy Agency reported that the regime had already stockpiled 10 times the amount of enriched uranium the agreement allows. In the fallout from U.S. Secretary of State Mike Pompeo’s weekend declaration, the Iranian rial immediately fell to 262,000 against the American dollar, a drop in value from 200,000 in July, and 85,000 a year ago.

These are unquestionably, big stories. But they only offer a glimpse of the big picture. Earlier this month, Amnesty International published an exhaustive report on Khomeinist cruelty—at least 7,000 stories involving Iranians who remain in prison from last winter’s protests, when at least 1,000 demonstrators were gunned down in the streets. Some of the prisoners are as young as 10. The 80-page report enumerates hangings, floggings, and torture by waterboarding, electric shock and rape.

While the major networks’ news broadcasts were cluttered last Sunday with stories about what Pompeo’s sanctions announcement might imply for the U.S. presidential election campaign, not so much notice was given to the courageous human rights lawyer Nasrin Sotoudeh when she was rushed to hospital on Sunday from her dungeon in Tehran’s Evin prison, where she’s been on hunger strike for a month. Sotoudeh was sentenced to 148 lashes and 38 years in prison two years ago for the crime of being a human rights lawyer.

It’s all to the good that an international spotlight turned at least briefly in recent weeks to the imprisonment and torture of Iran’s champion wrestler Navid Afkari, one of the more prominent figures involved in Iran’s recent protests. But the regime hurriedly executed Afkari two weeks ago, following what human rights organizations say was a travesty of a trial and a confession procured by torture. Appeals on Afkari’s behalf from the Trump administration, from the 85,000-member World Players Association and from the International Olympic Committee were ignored.

It’s Iran’s minority communities that appear to be enduring the regime’s most brutal repression these days, and that’s the story that isn’t widely known.

Another four political prisoners from the persecuted Arabic-speaking Ahwazi minority are due to be executed in the coming days following what appears to have been a grotesque miscarriage of justice. In a statement Monday, Amnesty said that prisoners from Iran’s ethnic minorities are particularly at risk of execution, “given the authorities’ pattern of executing prisoners from these groups when concerned about the eruption of popular protests. . . Without urgent diplomatic and public action, more lives in Iran are at risk of being cut short by the state’s execution machine.”

The regime’s sadism appears to be most intensely focused on Iran’s Baha’i people, who number perhaps 300,000. The Baha’i religion, which emerged from Shia Muslim traditions in Iran in the early 19th century, concerns itself with quiet reflection, meditation and acts of charity. Emphasizing education and gender equality, the faith was subjected to an especially brutal repression following the Khomeinist takeover of Iran in 1979. Baha’i administrative leaders were executed or imprisoned. Their cemeteries and holy places are still routinely desecrated and bulldozed.

RELATED: Why Canada should crack down on corrupt Iranian officials and their dirty money

Baha’i people are denied the few rights other Iranians are permitted. The law specifically prohibits them from holding government jobs, denies them pensions, withholds legal recognition of Baha’i marriages, and forbids Baha’i people from attending university. While Carleton University, the University of Ottawa and McGill University have played a role in assisting Iran’s underground Baha’i Institute for Higher Education, the Iranian courts have lately taken to criminalizing holders of the institute’s unauthorized university degrees.

In recent months, the persecution has intensified. In May, for instance, seven Baha’i people in Shiraz were sentenced to prison terms of varying lengths for “propaganda against the regime” and other trumped-up charges for offences that included “forging” a Baha’i Institute university degree, environmental activism, and caring for children in a daycare centre. Baha’i children are specifically prohibited from continuing their schooling beyond the 11th grade.

Which brings us back to 15-year-old Nawal Talebi, her piano and her Instagram videos.

“This is the kind of thing, the only kind of thing, they can do. It is in their own house,” Nawal’s aunt Soheila told me. “They’re stopping Baha’is from anything they do. Living is so hard already, and imagine these kids now, their parents are not there, kids their age. They have no idea what’s going on.”

Persecution is not new to the Talebi family. Soheila’s father Mousa was arrested following the 1979 Khomeinist takeover, spent a year in prison, and in 1993 was arrested again for membership in a Baha’i assembly in Isfahan. Sentenced to death, his sentence was later commuted to life in prison, and then a 10-year term, after Amnesty International publicized his case.

Soheila’s brother and his wife were first arrested two years ago when police raided the house and confiscated computers, photographs and other items. It was when they were summoned to a local police station to retrieve their confiscated possessions, on Aug. 23, that Hooshmand and Mojdeh were arrested again.

Nobody knows why, and it doesn’t help that it’s becoming next to impossible to communicate with family members back in Iran. Twitter and Facebook and Telegram have been banned. Instagram is still legal—roughly 24 million Iranians use the platform. But its days may be numbered: the Islamic Propaganda Organization recently threatened to block access to it.

Soheila says she has had some cursory contact via Instagram with Nawal and her brother Nadin, but Iranians have come to expect that their communications are monitored. “We just say ‘hi, how are you doing, things will get better.’ But nothing more than that,” she says.

The family wants Prime Minister Justin Trudeau or Foreign Affairs Minister François-Philippe Champagne to at least protest the imprisonment of Hooshmand and Mojdeh, or draw some attention to their predicament. Soheila’s local Member of Parliament, the Liberal Ron McKinnon, says he’s looking into the matter. “Canada is concerned about reports of human rights violations and arbitrary detention in Iran,” McKinnon said in a statement Monday. “We are following this case closely and I will continue to work with my constituent.

“Canada will always stand up for freedom of religion and human rights.”