Nimrud was the second capital of Assyria, an ancient kingdom that began in about 900 B.C. and became a great regional power 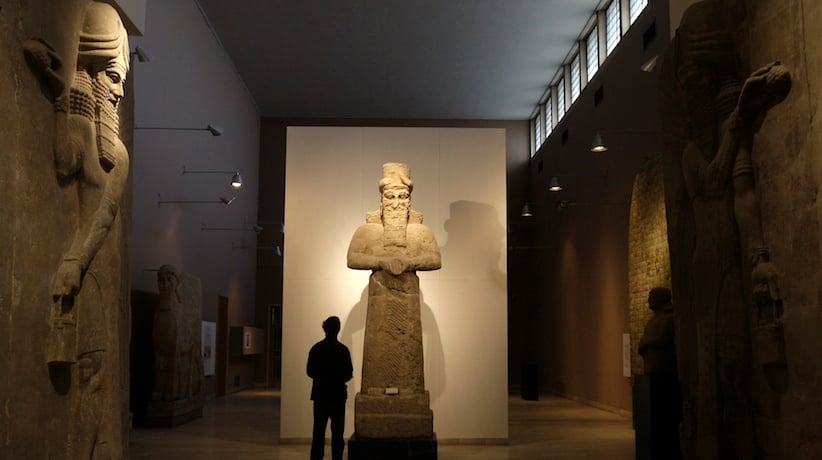 A journalist looks at an Assyrian statue in Baghdad. AP Photo/Petros Giannakouris, File

BAGHDAD – Iraqi forces pressed their offensive against the Islamic State group Friday, expecting to reach the outskirts of the militant-held city of Tikrit within hours, a day after the extremists reportedly “bulldozed” a famed archaeological site in the area.

The battle to wrest Tikrit – Saddam Hussein’s hometown – from the Islamic State is a major test for the Iraqi forces and allied Shiite militias fighting on heir side.

The governor of Salahuddin, Raed al-Jabouri, said that Iraqi forces expect to reach Tikrit later Friday. He told The Associated Press they still have not made it to Tikrit’s east airport as some reports have suggested.

Tikrit, 130 kilometres north of Baghdad, has been under the control of the Islamic State group since June, when the Sunni militants made a lightning advance across northern Iraq, prompting Iraqi troops to flee and abandon their weapons.

On Monday, Iraqi security forces launched a large-scale operation in an effort to retake the city from the militant group, but the offensive was stalled somewhat, with military officials saying the militants strategically lined roads leading to the city with explosives and land mines.

Meanwhile, the Iraqi Ministry of Tourism and Antiquities said late Thursday that the IS militants “bulldozed” the renowned archaeological site of the ancient city of Nimrud in northern Iraq.

The destruction is part of the group’s campaign to enforce its violent interpretation of Islamic law, destroying ancient archaeological sites it says promoted apostasy.

The ministry’s report could not be immediately independently confirmed.

Nimrud was the second capital of Assyria, an ancient kingdom that began in about 900 B.C., partially in present-day Iraq, and became a great regional power. The city, which was destroyed in 612 B.C., is located on the Tigris River just south of Iraq’s second largest city, Mosul, which was captured by IS in June.

The IS extremists’ rampage against priceless cultural artifacts has sparked global outrage.

Also Thursday, the IS militants set fire to some oil wells outside Tikrit, an Iraqi oil official said, speaking on condition of anonymity as he was not authorized to talk to the media. The smoky fires were apparently meant to obscure targets from government bombing runs, part of the wide-scale operation that began Monday.

The Ajeel oil field, about 35 kilometres northeast of Tikrit, was one of at least four fields seized by the militants as a source of crude oil to sell to smugglers to finance their operations.