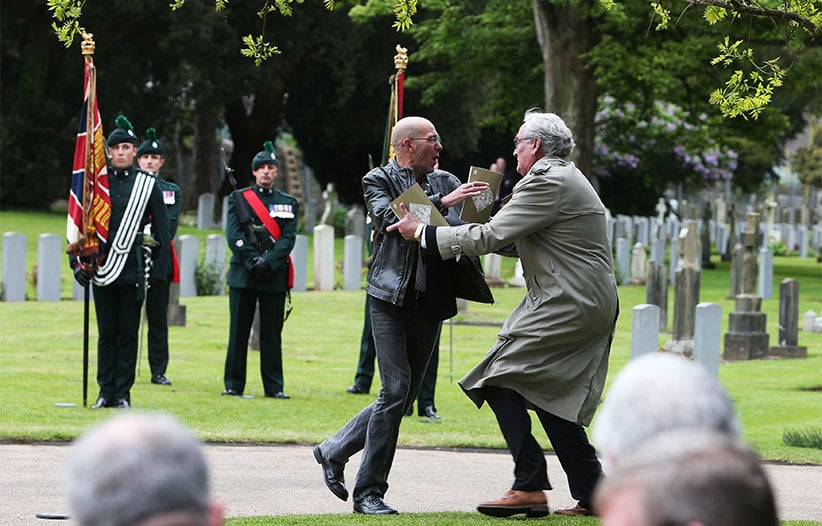 Canadian Ambassador to Ireland Kevin Vickers, right, wrestles with a protester during a State ceremony to remember the British soldiers who died during the Easter Rising at Grangegorman Military Cemetery, Dublin Thursday May 26, 2016. Vickers helped subdue a demonstrator who began chanting “insult” at the service commemorating more than 100 British soldiers killed trying to suppress the Easter Rising a century ago. (Brian Lawless/AP)

An Irish republican protester manhandled by Canada’s ambassador at a commemoration event in a Dublin cemetery Thursday says he holds no ill will.

Kevin Vickers, the former House of Commons sergeant-at-arms, tackled protester Brian Murphy during a centenary ceremony to remember British soldiers killed in the 1916 Easter Rising, which claimed 485 lives, including more than 100 British forces.

The intervention sparked immediate comparisons on social media to Vickers’ heroic actions in thwarting a gunman on Parliament Hill two years ago. But the protester in Dublin says he was no threat.

“Maybe he had a different perception of what was happening or what my intentions were,” Murphy, 46, told The Canadian Press in a telephone interview.

Murphy said the attention the international incident has garnered is raising the issue of Irish republicanism and what he sees as injustice toward two imprisoned men.

“Put it this way, it wasn’t my intention (but) the way things played out, you know, things are grand,” said the manager of a youth and community centre in Dublin, who now faces a charge of breach of public order he says he’ll fight in court.

“The Irish police was straight there on top of me and sort of walked me away. I certainly wasn’t going to be offering any resistance to anybody there. I was basically outnumbered 200 to one.

“I was making a point and I knew what the outcome would be _ that I’d be taken away.”

The republican advocacy group of which Murphy is a member took a far harder line, however, demanding a Canadian government apology and calling for the “immediate removal” of Vickers as Canada’s ambassador to Ireland.

“His position does not extend him to involve himself in Irish internal affairs,” the Irish Republican Prisoner Welfare Association said in a statement.

“Not only did Mr. Vickers interfere with the right of an Irish citizen to peacefully protest in his own country he undermined the role of the Irish state and the Garda (police) authority to deal with such protests.”

Vickers, best known for his role in shooting dead an armed assailant inside the Parliament buildings in 2014, jumped into action as soon as Murphy rose from his seat in the invitation-only crowd and approached the dignitaries, shouting slogans.

“As the individual sought to disrupt the ceremony, Ambassador Vickers reacted instinctively to prevent the individual’s encroachment and the (police) removed him from the scene. The ceremony then proceeded as planned,” Jennifer Bourke, a spokeswoman for Ireland’s foreign affairs minister, Charles Flanagan, said in an email.

Murphy, whose grandmother was born in Halifax and whose great-grandfather fought in the British army, says he applied for and received an invitation.

Video shows Vickers wrestling a man in a T-shirt and black jacket along a walkway while ceremonial guards stand impassively in the background.

A spokesman for Global Affairs Canada said Vickers, 59, was not injured in the incident and would not be doing media interviews about the altercation.

Vickers, who served 29 years as an RCMP officer, was among those who responded to the Oct. 22, 2014, assault on Parliament Hill by rifle-wielding Michael Zehaf Bibeau, who died in a hail of bullets _ including those fired by the sergeant-at-arms from his pistol at close range.

Vickers received an extended standing ovation during an emotional ceremony when the House of Commons resumed business the following day. He received his ambassadorial appointment in January 2015.

In May 2015 Vickers used the occasion of an honorary degree ceremony at Mount Allison University in Sackville, N.B., to describe how he woke up crying at 5:30 a.m. the day after the shooting, calling it “the loneliest moment of my life.”

And Vickers told the students how he prayed for Zehaf Bibeau, who killed Cpl. Nathan Cirillo, an honorary guard at the National War Memorial, before storming Parliament’s Centre Block where he wounded a security guard.

Vickers, hailed as a hero at the time of the Oct. 22 shooting, was flooded with further laudatory mentions on social media Thursday at news of his protest tackle in Dublin.

But a few questioned why a diplomat was taking security into his own hands at an event that was heavily policed.

Murphy, for his part, shrugged off Vickers’ role.

The protester said he saw Vickers rising out of his chair as soon as he began walking toward the dignitaries. He had no idea who Vickers was.

“I think if people look and say, well, he (Vickers) was brave to do what he did, then there was a certain bravery in me going to an event like that and expressing opinions that nobody else at that event agreed with, and put myself at risk,” said Murphy.

“Hopefully people can see an element of that, whether they agree with what I did or how I did it. I’m not some raving lunatic that spends their times at every type of protest.”

Murphy said he hopes Vickers will read up on his grievances as a result of the incident.

Some on social media wondered why Canada’s representative in Ireland even attended a ceremony for British soldiers killed in the 1916 uprising.

Global Affairs said Vickers was representing Canada at the Easter Rising ceremony as a guest of Flanagan.

The Easter Rising, or Easter Rebellion, involved Irish nationalists rebelling against the British occupational government in an effort to create an Irish Republic.

Dublin was the scene of fierce fighting, and Britain ended up declaring martial law. A week of conflict left more than 450 dead and 2,000 injured.

Fifteen leaders of the republicans were subsequently executed, while more than 3,000 suspected supporters were arrested.