Hurricane Irma pummels Florida: 'This one scares me'

Parts of the Keys have recorded a storm surge of more than three metres as the monster storm buffets nearly the entire state.

By Jennifer Kay and Freida Frisaro, The Associated Press September 10, 2017 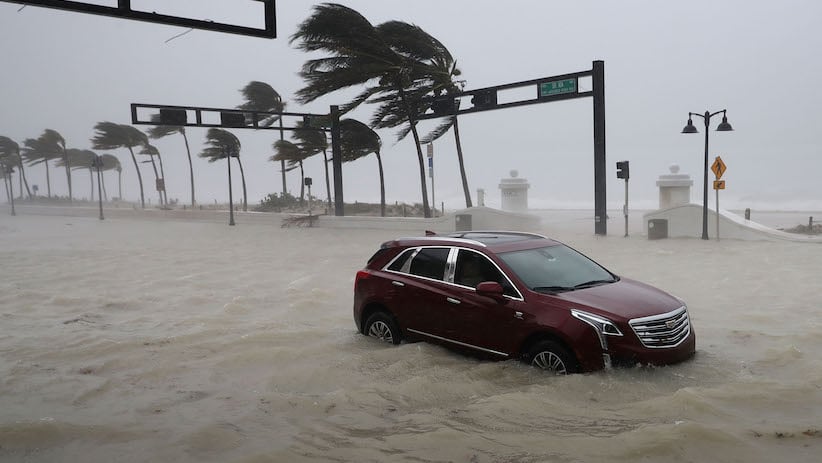 FORT LAUDERDALE, FL – SEPTEMBER 10: A car sits abandoned in storm surge along North Fort Lauderdale Beach Boulevard as Hurricane Irma hits the southern part of the state September 10, 2017 in Fort Lauderdale, Florida. The powerful hurricane made landfall in the United States in the Florida Keys at 9:10 a.m. after raking across the north coast of Cuba. (Photo by Chip Somodevilla/Getty Images)

MIAMI — A monster Hurricane Irma roared into Florida with 130 mph (209 kph) winds Sunday for what could be a sustained assault on nearly the entire Sunshine State, flooding streets, knocking out power to more than 1.8 million homes and businesses and snapping massive construction cranes over the Miami skyline.

This is crazy! #Hurricane #Irma is whipping this #crane around like a toy in #Miami, #Florida! #HurricaneIrma pic.twitter.com/tTxpHPgI7A

From my brother's Univision colleagues in downtown Miami pic.twitter.com/ADJlO5R6tR

The nearly 400-mile-wide (640 kilometres) storm blew ashore in the morning in the mostly cleared-out Florida Keys and was expected to make a slow, ruinous march up the state’s west coast, hitting the heavily populated Tampa-St. Petersburg area by Monday morning.

“Pray, pray for everybody in Florida,” Gov. Rick Scott said on “Fox News Sunday” as some 116,000 people statewide waited it out in shelters.

Irma struck as a Category 4 but by midafternoon had weakened to a Category 3 with still-fearsome 120 mph (193 kph) winds and heavy rain. A storm surge of more than 10 feet (three metres) of water was recorded in part of the Keys, and similar flooding was expected on the mainland.

Many streets were underwater in downtown Miami and other cities. Roof damage and floating appliances and furniture were reported in the low-lying Keys, but the full extent of Irma’s wrath there was not clear.

A Miami woman who went into labour was guided through delivery by phone when authorities couldn’t reach her in high winds and street flooding. Firefighters later took her to the hospital.

An apparent tornado spun off by Irma destroyed six mobile homes in Palm Bay, hundreds of miles away along the state’s Atlantic coast. Flooding was reported along Interstate 4, which cuts across Florida’s midsection.

In downtown Miami, two construction cranes collapsed in the high winds. No injuries were reported. City officials said it would have taken about two weeks to move the cranes. 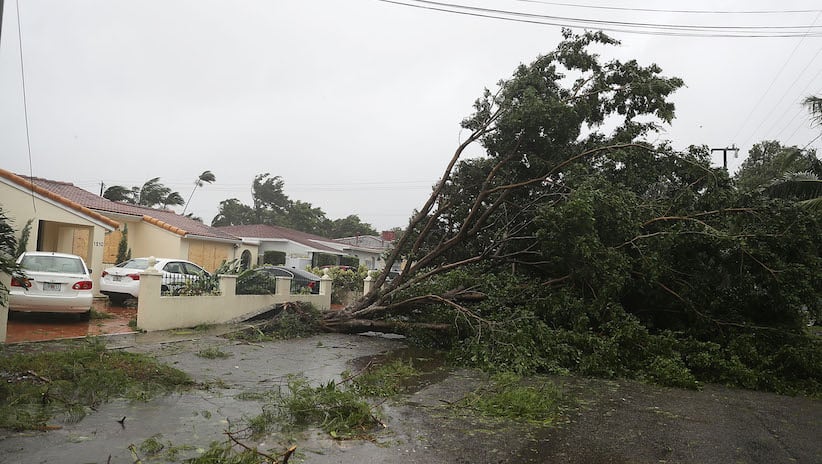 MIAMI, FL – SEPTEMBER 10: Trees and branches are seen after being knocked down by the high winds as hurricane Irma arrives on September 10, 2017 in Miami, Florida. Hurricane Irma made landfall in the Florida Keys as a Category 4 storm on Sunday, lashing the state with 130 mph winds. (Photo by Joe Raedle/Getty Images)

There were no immediate confirmed reports of any deaths in Florida, on top of 24 people killed during the storm’s destructive trek across the Caribbean.

While the projected track showed Irma raking the state’s Gulf Coast, forecasters warned that the entire state — including the Miami metropolitan area of 6 million people — was in danger because of the sheer size of the storm.

Nearly 7 million people in the Southeast were warned to evacuate, including 6.4 million in Florida alone.

About 30,000 people heeded orders to leave the Keys as the storm closed in, but an untold number refused, in part because to many storm-hardened residents, staying behind in the face of danger is a point of pride.

John Huston, who stayed in his Key Largo home, watched his yard flood even before the arrival of high tide. “Small boats floating down the street next to furniture and refrigerators. Very noisy,” he said by text message. “Shingles are coming off.”

Irma made landfall just after 9 a.m. at Cudjoe Key, about 20 miles outside Key West, forecasters said. By midafternoon, it was advancing at about 12 mph toward Florida’s southwestern corner, which includes Naples, Fort Myers and Sarasota.

For days, forecasters had warned that Irma was taking dead aim at the Miami metropolitan area and the rest of Florida’s Atlantic coast.

But then Irma made a more pronounced westward shift — the result of what meteorologists said was an atmospheric tug-of-war between weather systems that nudged Irma and determined when it made its crucial right turn into Florida.

Meteorologist Ryan Maue of WeatherBell Analytics said the entire Florida peninsula will be raked by Irma’s right front quadrant — the part of a hurricane that usually brings the strongest winds, storm surge, rain and tornadoes.

The Tampa-St. Petersburg area, with a population of about 3 million, has not taken a direct hit from a major hurricane since 1921. The wind was already picking up in St. Petersburg, some 400 miles north the Keys, and people began bracing for the onslaught.

“I’ve been here with other storms, other hurricanes. But this one scares me,” Sally Carlson said as she snapped photos of the waves crashing against boats. “Let’s just say a prayer we hope we make it through.”

The governor activated all 7,000 members of the Florida National Guard, and 10,000 guardsmen from elsewhere were being deployed.

Forecasters warned that after charting up Florida’s west coast, a weakened Irma could push into Georgia, Alabama, Mississippi, Tennessee and beyond. A tropical storm warning was issued for the first time ever in Atlanta, some 200 miles from the sea.

“Once this system passes through, it’s going to be a race to save lives and sustain lives,” Federal Emergency Management Agency chief Brock Long said on “Fox News Sunday.”

With FEMA still dealing with the aftermath of Hurricane Harvey in Houston, Irma could test the agency’s ability to handle two disasters at the same time.

Florida Power and Light warned it will take weeks before electricity is fully restored.

Irma at one time was the most powerful hurricane ever recorded in the open Atlantic, a Category 5 with a peak wind speed of 185 mph (300 kph). Given its size, strength and projected course, it could prove one of the most devastating hurricanes ever to hit Florida.

The storm brought memories of Hurricane Charley, which blew ashore near Fort Myers in 2004 with winds near 149 mph. It caused $15 billion in damage and was blamed for as many as 35 deaths in the U.S.