Is pope the worst job ever?

It's not just the pressure of shepherding a billion believers. There's also those red slippers. 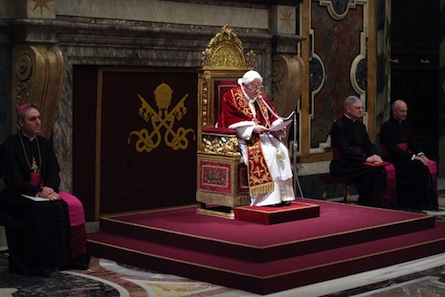 Top of mind for the world’s media packed into Rome is: who will win? But the real question should be: who will lose?

There’s a very good reason the first place a new pope finds himself is a small space off the Sistine Chapel called the crying room, or the room of tears.
Many new popes, upon “winning,” weep.

It is not just the weight of a new office, where the pope is tasked with shepherding the spiritual life of a billion faithful spread around the world. Or the fact he must make his first public appearance wearing red slippers. He’s also a head of state, a bishop in his own right, and depending on which example you take, a prolific traveler (John Paul II) or a prolific scholar and writer (Benedict XVI).

A former Swiss Guard (the men who protect the Holy Father), said Benedict XVI never wanted the job. “The pope is the end of your life. You lose your friends. You lose your family,” said Andreas Widmer. You’re a prisoner, he continued, confined by the walls of the Vatican.

A pope’s mornings are early, his days packed with meetings, his years packed with feasts and masses and travels. Italian journalist and Vatican watcher Andrea Tornielli called any man looking to be the next Supreme Pontiff “totally crazy.”

John Paul I may be the greatest warning. He was elected in 1978, and only managed to keep pace for one month before he died.

The papal conclave isn’t the World Cup or the Olympics. There’s no trophy at the end. But there is, perhaps, a sentence.