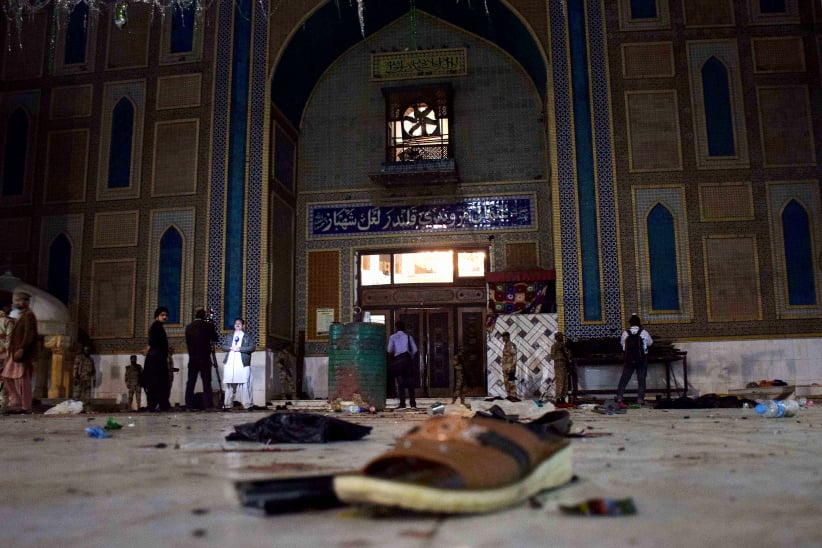 Pakistani soldiers cordon off the shrine of 13th century Muslim Sufi Saint Lal Shahbaz Qalandar, after a bomb blew up in the town of Sehwan in Sindh province, some 200 kilometres northeast of the provincial capital Karachi on February 16, 2017. (Yousuf Nagori/AFP/Getty Images)

KARACHI, Pakistan – An Islamic State suicide bomber struck inside a famed shrine in southern Pakistan on Thursday, killing at least 75 people in the deadliest attack in the country in more than two years.

The bomber entered the main hall of the shrine of Lal Shahbaz Qalandar in Sehwan and detonated his payload amid dozens of worshippers, according to three security officials, who said at least 20 women and nine children were among the dead.

The officials spoke on condition of anonymity because they were not authorized to brief reporters. Fazal Palejo, a senior health official in Sindh province, confirmed the toll.

The Islamic State group claimed the attack in a statement circulated by its Aamaq news agency, saying it had targeted a “Shiite gathering.” The Sunni extremist group views Shiites as apostates and has targeted Pakistan’s Shiite minority in the past. It views Sufi shrines like the one targeted Thursday as a form of idolatry.

Raja Somro, who witnessed the attack, told a local TV network that hundreds of people were performing a spiritual dance known as the Dhamal when the bomber struck.

Local TV showed graphic footage of the aftermath of the blast, with wounded worshippers crying out for help and the floors covered with shoes, blood and body parts. Women cried and beat their chests in grief.

Ghazanfar Shah, the custodian of the site, said security was lax at the shrine, which is entered through two gold-plated doors. 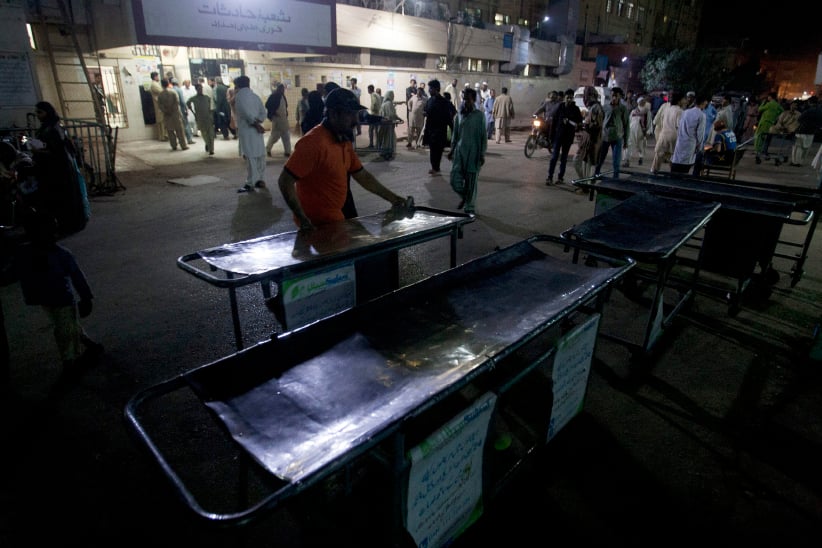 Pakistani hospital staff make arrangements outside an emergency ward for the victims of suicide bombing at a famous shrine in interior Sind province, in Karachi, Pakistan. (Shakil Adil/AP)

Prime Minister Nawaz Sharif vowed that security forces would track down the perpetrators of the attack, according to Pakistani state TV.

“Each drop of the nation’s blood shall be avenged, and avenged immediately,” Pakistan’s army chief, Gen. Qamar Javed Bajwa, said in a statement. “No more restraint for anyone.”

Thursday’s attack was the deadliest in Pakistan since Dec. 16, 2014, when militants assaulted an army-run school in Peshawar, killing 154 people, mostly schoolchildren.

Pakistan has been at war with the Taliban and other extremist groups for more than a decade. In recent years it has launched major offensives against militant strongholds in the tribal regions along the border with Afghanistan, but insurgents have continued to carry out attacks elsewhere in the country.

The Islamic State group has been expanding its presence in Pakistan in recent years and has claimed a number of deadly attacks, including a suicide bombing at another shrine in November 2016 that killed more than 50 people.

The government has downplayed the IS affiliate, insisting that only a small number of militants have pledged allegiance to the group.

Afghanistan and Pakistan have long accused each other of failing to crack down on militants who operate along the porous border.

The army spokesman, Maj. Gen. Asif Ghafoor, said acts of terrorism were being carried out “from hostile powers and from sanctuaries in Afghanistan,” without elaborating. Pakistan closed the main Torkham border crossing with Afghanistan shortly after the attack.