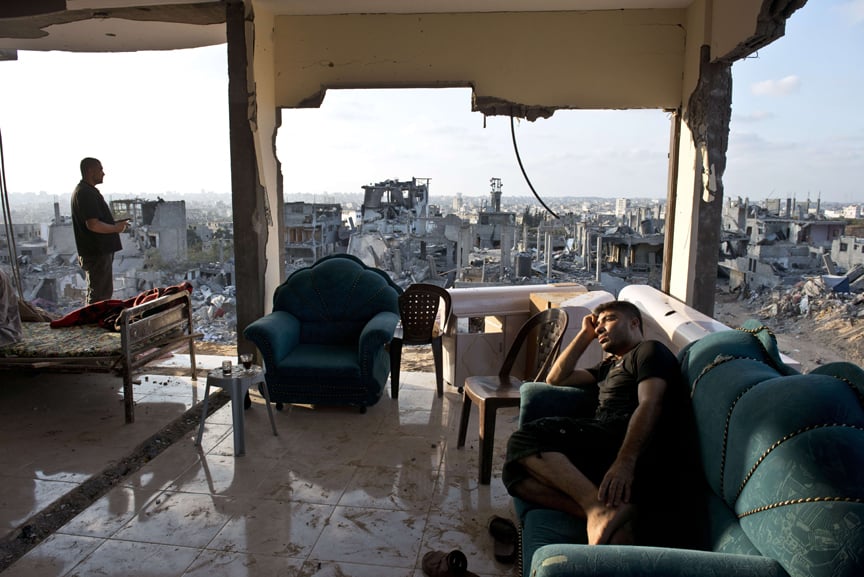 The strikes in the southern town of Rafah came just hours after Israel bombed a residential tower in Gaza City, collapsing the 12-story building with 44 apartments.

A total of eight people were killed in Sunday’s airstrikes. Israel said one of the dead was a Hamas official involved in handling the group’s finances.

The targeting of large buildings appears to be part of a new tactic by Israel. Over the weekend, the army began warning Gaza residents in automated phone calls that it would target buildings harbouring “terrorist infrastructure” and that they should stay away.

A senior military official confirmed that Israel has a policy of striking at buildings containing Hamas operational centres or those from which military activities are launched. The official said each strike required prior approval from military lawyers and is carried out only after the local population is warned.

However, he said, there was now a widening of locations that the military can target. The official spoke on condition of anonymity because he was not permitted to discuss the matter with reporters.

“I call on the people of Gaza to immediately evacuate any structure that Hamas is using to commit acts of terror,” he said. “Every one of these structures is a target for us.”

In the 12-story apartment tower, the target was a fourth-floor apartment where Hamas ran an operations centre, according to Israeli media. In the past, Israel has carried out pinpoint strikes, targeting apartments in high-rises with missiles, while leaving the buildings standing.

The military declined immediate comment when asked why it collapsed the entire building instead of striking a specific apartment.

Meanwhile, Gaza militants continued to fire rockets and mortar shells at Israel, including at least 10 on Sunday, one of which wounded three people on the Israeli side of the main Gaza crossing, the military said.

Israel’s Defence Ministry said the three wounded were civilian drivers waiting to transport wounded Gazans who had been brought into Israel for treatment in hospitals. The Erez crossing is used by journalists, aid workers and Palestinians with Israeli permits to enter or leave Gaza.

In southern Israel, hundreds of people attended the funeral of 4-year-old Daniel Tragerman, who was killed Friday in a mortar attack. The mourners included Israel’s President, Reuven Rivlin.

Elsewhere, five rockets were fired from Syria and fell in open areas in northern Israel. It was not immediately clear whether they were fired by pro-government forces or rebel groups.

Amid persistent violence, Egypt has urged Israel and the Palestinians to resume indirect talks in Cairo on a durable cease-fire, but stopped short of issuing invitations.

Several rounds of indirect talks between Israel and Hamas have collapsed, along with temporary cease-fires that accompanied them. The gaps between Israel and the Islamic militant group on a new border deal for blockaded Gaza remain vast, and there’s no sign either is willing to budge.

The Israeli military said it had carried out some 20 strikes on Gaza since midnight Saturday. Gaza police and medical officials reported eight fatalities.

The seven-story Zourab building bombed by Israeli aircraft early Sunday housed an office of the Hamas-run Interior Ministry. Witnesses said the building in Rafah was levelled and that the strikes caused severe damage to nearby shops, homes and cars. It was not immediately clear if anyone was wounded or killed.

Another strike hit a nearby shopping centre with dozens of shops, sparking a fire that gutted the two-story building and wounding seven people. After daybreak Sunday, smoke was still rising from the site as shop owners inspected the damage. Windows and doors had been blown out in nearby buildings.

The military said the two buildings were attacked because they housed facilities linked to militants, but did not provide details. Twenty-two people were wounded in Saturday’s strike on the tower in Gaza City.

Palestinian health official Ashraf al-Kidra, who confirmed the casualty figures for the strikes, said two people were killed in a pair of airstrikes near a coastal road on Sunday, including one on a group of people coming out of a mosque after morning prayers.

Two more fatalities were registered when a motorcycle following a car evacuating the wounded from the strikes was targeted, he said.

Palestinians identified the man travelling in the car as Mohammed al-Ghoul. Israel said al-Ghoul was responsible for Hamas’ financial transfers for “terror funds.” It did not elaborate, and the claim could not immediately be verified.

The U.N. estimates that more than 17,000 homes have been destroyed or damaged beyond repair since the war began on July 8. In some of the attacks, family homes with three or four floors were pulverized.

However, the weekend strikes marked the first time large buildings were toppled.

Since the fighting began, Israel has launched some 5,000 airstrikes at Gaza, while Gaza militants have fired close to 4,000 rockets and mortars, according to the Israeli military.

More than 2,100 Palestinians, including close to 500 children, have been killed, according to Palestinian health officials and U.N. figures. Israel has lost 64 soldiers and four civilians.

Israel says it is targeting sites linked to militants, including rocket launchers, command centres and weapons depots. The U.N. says about three-fourths of the Palestinians killed have been civilians.

With the war showing no signs of winding down, educational officials in Gaza said they were delaying the start of both U.N. and government-run schools. Classes in both were supposed to begin Sunday.

The U.N. said it would begin a gradual back to school program this week “to help students and teachers start to transition into a new school year.”

The nearly two-month Gaza war stems from the kidnapping and killing of three Israeli teens in the West Bank by Hamas operatives in June, which triggered a massive Israeli arrest campaign in the West Bank, followed by an increase in rocket fire from Gaza.