In Israel, a humbled Netanyahu places hopes in Trump 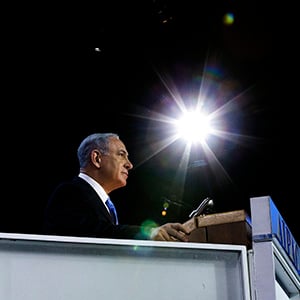 JERUSALEM—The Israeli government’s furious reaction to the U.N. Security Council’s adoption of a resolution opposing Jewish settlements in occupied territory underscores its fundamental and bitter dispute with the international community about the future of the West Bank and east Jerusalem.

Prime Minister Benjamin Netanyahu insists that there is nothing wrong with his controversial policy of building Jewish towns in occupied areas that the Palestinians, with overwhelming world support, claim for their state. But Friday’s U.N. rebuke was a stark reminder that the rest of the world considers it a crime. The embattled leader is now placing his hopes in the incoming administration of Donald Trump, which is shaping up as the first major player to embrace Israel’s nationalist right and its West Bank settlements.

In a series of statements, Netanyahu has criticized the Obama Administration for letting Resolution 2334 pass Friday by abstaining, using unprecedented language that has turned a policy disagreement into a personal vendetta.

“From the information that we have, we have no doubt that the Obama Administration initiated it, stood behind it, co-ordinated on the wording and demanded that it be passed,” Netanyahu told his Cabinet on Sunday.

In turning his anger toward Israel’s closest and most important ally, Netanyahu has underplayed the embarrassment that all 14 other nations on the Security Council voted in favour of the measure. Those votes came from countries that Netanyahu loves to boast of cultivating relations with, including Russia and China and nations across the developing world.

“This is the same prime minister who told us dozens of states are on board with us,” former Prime Minister Ehud Barak told Channel 2 TV on Saturday. “I looked for Russia, China, England, France. Where are all the friends that were meant to stand with us?”

The resolution marked a sharp international rebuke of Israeli settlement policies in the West Bank and east Jerusalem—territories captured in the 1967 Mideast war and claimed by the Palestinians as parts of a future independent state. Some 600,000 Israelis now live in the two areas, complicating any partition of the land between Israel and a future Palestine.

Netanyahu routinely dismisses international criticism of the settlements, saying that the dispute with the Palestinians goes back to long before the 1967 war.

He also notes that when Israel dismantled its Gaza settlements in 2005, Hamas militants responded by firing rockets and subsequently seizing control of the territory from Palestinian President Mahmoud Abbas.

With Friday’s resolution, however, the world sent a strong message that it rejects these arguments. The resolution said the settlements have “no legal validity” and constitute a “flagrant violation” of international law. It also urged all states to distinguish between Israel and “the territories occupied since 1967.”

In the short term, the resolution is largely symbolic. It did not include talk of sanctions or any other punitive measures against Israel.

“The importance of the resolution is to remind Israel, at least at the rhetorical level, that the international community is not completely happy, to say the least, with the ongoing status quo,” said Arie Kacowicz, a professor of international relations at the Hebrew University in Jerusalem.

Riad Malki, the Palestinian foreign minister, said Netanyahu was being disingenuous by calling the resolution anti-Israel.

“This resolution is about settlement activities, the two-state solution and ending the occupation,” he said. “Netanyahu, by his statements and his actions, is isolating Israel for the sake of settlements.”

Malki said the Palestinians hoped the resolution would bolster their case at the International Criminal Court, which has launched a preliminary investigation into the settlements. He also said he hoped it would encourage European countries to follow up on an EU recommendation to clearly label products manufactured in settlements, and encourage other countries to do the same.

On Jan. 15, days before Obama leaves office, France is expected to host a Mideast conference where dozens of countries may endorse an international framework for peace between Israel and the Palestinians. Netanyahu vehemently opposes such activity, saying it undermines the negotiating process.

The recent diplomatic defeat would be much more damaging if not for a potential remaining and rather major ace in Netanyahu’s hand: the incoming Trump Administration.

In a striking departure from past policy of incumbent presidents waiting on the sidelines, Trump tried to scuttle the resolution and called for a U.S. veto. After the vote, Trump vowed that “things will be different after Jan. 20th.”

Critically, he has appointed an outspoken supporter and donor to the settlements, his longtime attorney David Friedman, as ambassador to Israel. And aides say Trump is serious about a promise to move the U.S. Embassy from Tel Aviv to Jerusalem, which even many Israelis fear could spark violence. The Palestinians claim east Jerusalem, home to sensitive religious sites, as the capital of the future state to which they aspire.

After Friday’s vote, Netanyahu’s office said he looked forward to working with Trump “to negate the harmful effects of this absurd resolution.”

Netanyahu has since gone on a campaign to punish the countries that took part in the resolution. He has cancelled a slew of diplomatic visits and summoned ambassadors from Security Council countries, including the U.S., on Sunday, Christmas Day, in protest.

It remains unclear what Trump might be able to do. While he will be able to wield the U.S. veto to prevent further action against Israel in the council, mustering enough votes to overturn Friday’s decision appears to be impossible.

The basis for the resolution is found in the Geneva conventions, which forbid the settling of areas captured in war from another country. Israel has said the law doesn’t apply because the territory was captured from Jordan, which has renounced all claims to the land. Israel has also defended the occupation on religious and security grounds.

When Netanyahu’s rivals in Israel oppose the settlements, it is not necessarily due to a conviction that could be peace could be at hand, but rather for concern for Israel’s democracy. If Israel becomes inseparable from the West Bank, it will have to grant its 2.5 million Palestinians voting rights, or increasingly be unable to call itself a democracy.

The country is toxically divided on the issue, and key sectors of society, including intellectual elites and much of its security establishment, want to see settlements end. Many of them welcome—some openly, and many more quietly—any world pressure to bring that about.

Dan Miodownik, a professor of political science and international relations at Hebrew University, said there were actually some positive elements for Israel in the resolution.

He said it endorsed the idea of territorial swaps, meaning that Israel could keep some settlements as part of a negotiated peace deal. And the differentiation between Israel proper and the settlements signalled that unlike in the past, Israel was no longer being forced to defend its right to exist.