Italians are turning to wartime staples, and even urban scrounging, to get by in dire economic times 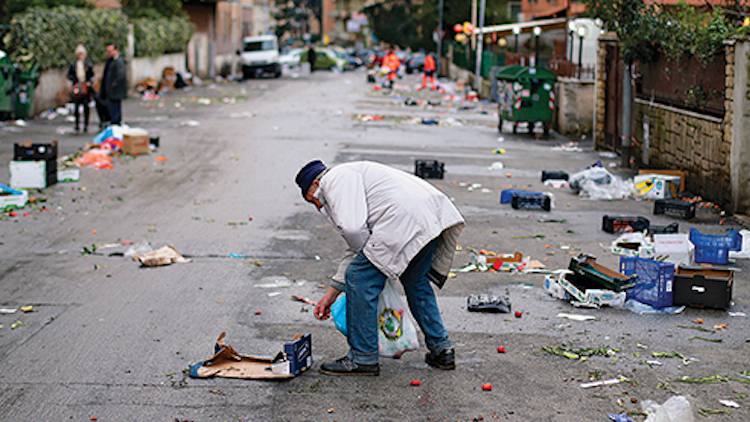 An ever-worsening economy has Italians looking to their past both in fear, and for answers. News reports warn of a return to the quasi-Third World status of the 1950s. People talk about Rome being as bad as it was during the Second World War. Italy’s central bank released a report last month that said one in six Italians lives on less than $955 per month and half of all families are living on less than $35,000 per year. The historic centre of Rome is as beautiful as ever and bustles with tourists. It can be hard to see at a glance how such hardship is affecting Italians—unless you go into their kitchens.

Elisabeth Giansiracusa is an Italian American who has lived in Italy for most of her life. She explains that her husband lost about a quarter of his income because of a new contract he had to accept when his employer went into receivership. “We’ve always had to watch our expenses,” she says. “Now we have to tighten the belt another notch.” She buys fresh produce grown as locally as possible, and fish on sale from her local fish market for her family, including their two university-age children. (Unlike in Canada, farmers sell their produce more cheaply than in the supermarkets.) Otherwise, they have given up meat, which she says is a health choice as much as a financial one. She cooks legumes and soups in traditional ways.

Italy has a culinary tradition known as la cucina povera, which is, simply, poor people’s food, and involves vegetable soups—minestra—that use up the ends of vegetables, like the leaves and stems of broccoli and the cauliflower core. Nothing is thrown away. Fruit and vegetable vendors sell chopped vegetables, salvaged from those that are just past their prime, for $3 a kilogram. A half kilo will make enough soup for four people. “Minestra never goes out of style,” says a vendor in the affluent Monteverde Vecchio market. “Now during the crisis, we sell out every day. However much I prepare, I sell.” As much as 60 per cent of the population has reported using such strategies to save money.

Lizzie Collingham, the author of The Taste of War: World War Two and the Battle for Food, says that when Allied soldiers arrived in 1944 they were shocked to find the population starving. “The basic ration in Rome when the U.S. Army arrived was 665 calories (well below the starvation level of 1,500).” Today, she says, Italians “might be feeling the pinch of austerity as at the beginning of the war when there was enough food but it was only just enough and very boring and monotonous.”

The food available now is not uninteresting (minestra can be quite tasty), but so dire is the financial situation for some that there are more people looking through the trash for things to sell, and even to eat. In some neighbourhoods, residents leave still-edible food, mostly fruit and vegetables or bread wrapped in plastic, separate from the trash on the curb or the ledge of a nearby wall for those who need it. The food usually disappears well before the feral cats notice it.

The lack of money has also led to a proliferation of vegetable gardens in abandoned lots and city parks. Silvia Cioli, an architect, formed an association with a group of architects called Zappata Romana to help gardeners share information and to map some of the community gardens around Rome. “We have so far mapped 200, but there are thousands of little gardens hiding,” she says. Urban gardening has its roots in the war, she says; it’s how people got through it. Cioli says there are families who rely on these gardens for the bulk of their food, and in some areas there are waiting lists of up to 60 families.

Cioli describes a group of unemployed people who identified a spot for a garden. The only problem was that there were homeless people, mostly undocumented Romanian immigrants, living there. “Instead of trying to get rid of them, they invited them to participate. They did. And it’s working very well for everyone,” she says.

In another case, 18 information technology workers, who were among the hundreds laid off by the telecommunications company Eutelia in 2009, started a garden on the Via Ardeatina. They call it Eutorto (an orto is a vegetable garden). Francesca De Dominicis started working at Eutelia in her late twenties and had been there for 15 years when she was laid off. She and her colleagues were wondering how to put food on the table. “We thought we can grow food. We cannot control the crisis but this is something we can do.”

They intended to grow enough for their own use but soon found they were producing far more. They started selling the surplus and making products like traditional vegetable pies to sell. They also set up a catering company using only the food they grow. The ex-Eutelia employees are still looking for work in their field, but in the meantime the garden has solved their more immediate concerns. “We eat very simply,” says De Dominicis. “But in this way, we are eating very well.”