'It's about grace': Charleston's churches ring bells in unity

Churches of all denominations across Charleston rang their bells at 10 a.m. to send healing message in wake of tragedy 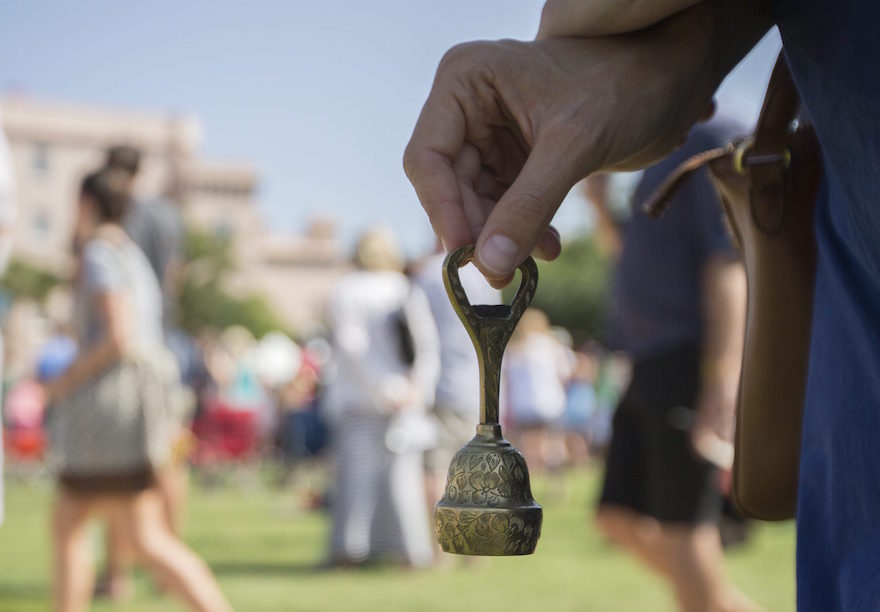 A person holds a bell at Marion Square as churches across the city rang their bells in a show of solidarity with Emanuel A.M.E. Church, Sunday, June 21, 2015, in Charleston, S.C., four days after a mass shooting at Emanuel claimed the lives of its pastor and eight others. (AP Photo/Stephen B. Morton)

CHARLESTON, S.C. — For several minutes Sunday, the sweltering skies above this grieving city were alive with the sound of bells: high in steeples and in the hands of toddlers, all ringing and tinkling in unison to honour the nine people cut down during a Bible study at the historic Emanuel African Methodist Episcopal Church.

Churches of all denominations across Charleston agreed to ring their bells at 10 a.m. in a gesture they hoped would send a healing message of unity and love to the world.

Standing in the shadow of St. Matthew’s Lutheran, less than a block from “Mother Emanuel,” Kelly Nix said the event brought her immense comfort.

“It’s about grace, hearing the bells and being part of a community that we love,” she said, tears rolling down her cheeks as her twin girls, Lana and Margeaux, who will turn 2 on Friday, ran around in their matching white dresses. “And searching for grace and faith in a time when you think of unthinkable things.”

Police say a white man named Dylann Storm Roof, 21, sat with the Bible study group for an hour Wednesday before pulling out a handgun and opening fire. Pastor Clementa Pinckney and eight others, ranging in age from 26 to 87, were killed.

Authorities have called the shooting a hate crime and are investigating whether a racist screed posted on the Internet was written by the suspect. But if Roof intended to strike a blow for segregation, Sunday’s event was meant as a message that he failed.

Less than a block from Emanuel, several hundred people gathered in Marion Square Park, which is dominated by a statue of pro-slavery U.S. Rep. John C. Calhoun and flanked by the spires of St. Matthew’s Lutheran and Citadel Square Baptist Church.

Under a blazing sun, the throng held an interdenominational service, sitting on blankets and folding chairs beneath umbrellas and tents. Some wore T-shirts bearing the faces of those who were slain at the church.

Behind the stage, hanging from the battlements of a castle-like hotel, hung a white banner with the words “Mother Emanuel, We Love You.”

Shortly before 10 a.m., Pastor Mike Seaver of Sovereign Grace Church in nearby Summerville read a passage from the book of Psalms. When he had finished, Seaver asked the throng to come closer together and urged them to “honour the Lord and weep with those who weep.”

Quincy Williams bent down and whispered to her 3-year-old sister, Michal, who was holding a purple plastic tambourine to match her purple dress.

“Are you going to shake it really loud?” the big sister asked. The shiny cymbals tinkled in response.

Quincy Williams is white. Her sister is black. She said their presence was a reminder that “God doesn’t see colour.”

“We’re all his under the sun,” Williams said as Michal shook her tambourine. “He created us individually, to be different. But those differences make us who we are.”

Across town at First Baptist, the Rev. R. Marshall Blalock read the names of the dead as their photos appeared on a large screen. He then told the story of a congregant whose young son was taunted by some whites at a fast food restaurant the day after the killings.

“The white community needs to build a bridge to the black community,” he said.

Blalock said Emanuel family members who offered their forgiveness to Roof in court on Friday sent the right message to him and to the world.

“He wanted division and hatred,” the pastor said. “But he went to the wrong place.”

People stapled notes to a wooden cross with the words “First Baptist Stands With Mother Emanuel.”

On the sidewalk outside St. John’s Lutheran, a crowd of about 40 parishioners and bystanders listened as the church’s 18-bell carillon _ which replaced a bell melted down for gun metal during the Civil War _ played a celebration peal in the steeple above.

Down below, Todd Monsell, music director of the 270-year-old congregation, led a hastily assembled hand bell choir of seven adults and seven children.

He told the group of amateurs to simply “make a joyful noise.” Across the street, Adam and Jill Fetsch clutched their twin 3-year-old twin daughters, Zoey and Ella, as the girls waved red and silver Christmas jingle bells.

“I wanted them to just create a memory and then later explain to them that something so amazing came from something so tragic,” the mother said. “They’re too young to understand this.”

Back at Marion Square, organizers waited to start the interdenominational service for nine minutes _ one for each of the victims. With the bells still tolling, Pastor Brandon Bowers of Awaken Church told the crowd that they were all one congregation this day, and that they were “gathered here to make a statement that what the enemy intended for evil, God is using for good.”

Sitting on a Snoopy blanket with his wife, Kristin, and their five young daughters, Seaver said the bells were a sobering reminder that there were nine families “that don’t have their moms and grandmas and dads today.”

Inside Emanuel, filled to overflowing, the bells were drowned out by the loudspeakers in front of the church projecting the singing and preaching from inside the sanctuary.

But for many people, it didn’t matter.

Felicia Breeland, 81, whose family has been attending Emanuel for four generations, said she was happy to see people “getting together, instead of dividing. God made all of us, right?”