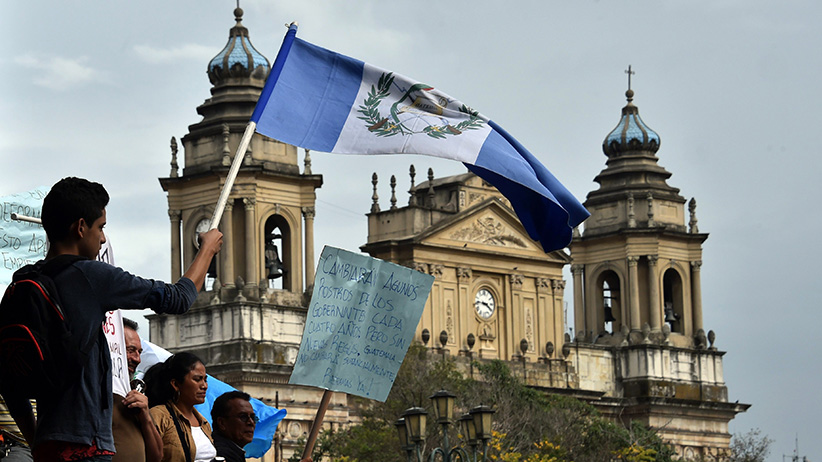 Guatemalans protest on the eve of general elections in Guatemala City on September 5, 2015. Guatemalans disgusted with rampant corruption that felled their president are set to vote Sunday in elections many see as meaningless without a vast political system cleanup. (RODRIGO ARANGUA/AFP/Getty Images)

GUATEMALA CITY — TV comic and self-styled outsider Jimmy Morales swept to Guatemala’s presidency on the back of popular anger against the political class after huge anti-corruption protests helped oust the last government.

Morales, who is to assume the presidency Jan. 14 and has never held political office, said he would get right to work with a transition team to study economic issues and work on development-oriented government policies.

“It is not I who declare myself the winner but rather the people who have done so,” said Morales, 46, who starred in the comedy “Moralejas.”

Morales claimed victory late Sunday and his runoff opponent, former first lady Sandra Torres, conceded defeat after official results showed him winning around 68 per cent of the votes with 97 per cent of polling stations tallied. Election officials were expected to give a final count Monday.

“We recognize Jimmy Morales’ triumph and we wish him success,” Torres said. “Guatemala has serious problems, but the people made their choice and we respect it.”

Hundreds of Morales backers gathered at his party headquarters, where a “banda” musical group played while they waited for the candidate.

“It is a historic vote,” said supporter Israel Orozco. “It is a response by the people to ratify hope for change.”

The runoff was held a month and a half after President Otto Perez Molina resigned and was jailed in connection with a sprawling customs scandal. His former vice-president has also been jailed in the multimillion-dollar graft and fraud scheme.

Though the protests have died down since Perez Molina’s resignation, many Guatemalans remain fed up with corruption and politics as usual, and Morales will face pressure to deliver immediately on widespread demands for reform.

Election officials reported preliminary voter participation figures as a little above 50 per cent, down from 71 per cent in the first round.

“The abstention and apathy catch one’s attention. We were looking at a proposal of more of the same or the other proposal which doesn’t exist,” political analyst Roberto Wagner said, referring to the platforms of Torres and Morales. “Citizen pressure will be important for changing the structures” of power.

Morales and Torres were the top two vote-getters in the first round Sept. 6, when presumed front-runner Manuel Baldizon finished a surprising third — a result considered to be a rejection of Guatemala’s political establishment in the wake of the corruption scandal.

The protests began in April after the scheme involving bribery at the customs agency was unveiled by Guatemalan prosecutors and a U.N. commission that is investigating criminal networks in the country.

Investigators first targeted former Vice-President Roxana Baldetti, whose personal secretary was named as the alleged ringleader of the scheme, and then Perez Molina.

Alejandro Maldonado Aguirre, who replaced Baldetti as vice-president after she resigned, assumed the country’s top job upon Perez Molina’s departure from office.

Morales, like Torres, promised during the campaign to keep Attorney General Thelma Aldana, a key figure in the investigation, and the U.N. commission in place. He also vowed to strengthen controls and transparency, saying in a debate this past week that the government has controls and auditing powers at its disposal.

“All the elements for auditing available to the presidency and vice presidency are going to be put to work,” Morales said.

Election officials and international observers said the vote came off without violence.

“They were very calm elections,” said Juan Pablo Cordazzoli, chief of the Organization of American States observer mission. “There were no serious incidents like in the first round.”