It's Joe Biden's world now. Can he fix it?

The departure of Trump means a departure from tyrant-flattery and the abuse of longstanding U.S. allies. Then the hard work begins. 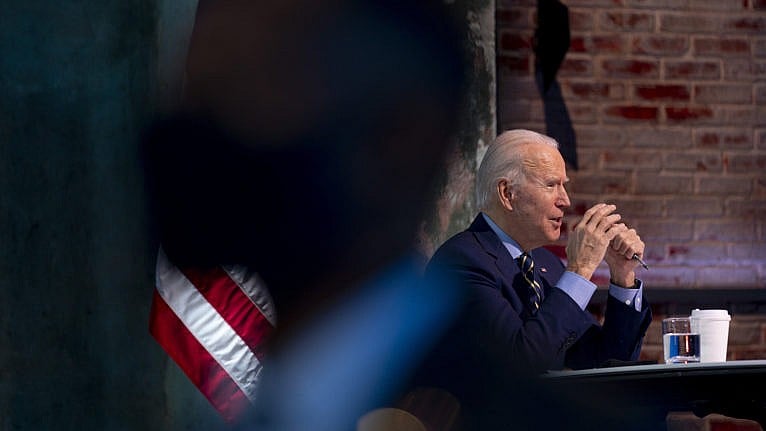 Biden at a recent virtual meeting with members of his national-security and foreign-policy agency review teams. (Andrew Harnik/AP)

Now that the lurid madhouse of Donald Trump’s presidency has come to its downfall in convulsions of mass violence and insurrection, the painstaking work of restoring America’s shattered confidence in itself isn’t even the steepest uphill climb facing Trump’s creaky 78-year-old successor from Scranton, Penn., the genial and grandfatherly Joseph Robinette Biden Jr.

Biden’s greater task involves the revival of global democratic alliances and rehabilitating democracy’s stature in the world as the most enlightened way to order human affairs. Clear majorities in the United States and Western Europe now say they’re dissatisfied with democracy, which is now in its 15th year of global retreat. And the United States is indispensable to democracy’s global revival, whether anybody likes it or not.

The good news is Biden and his vice-president-elect Kamala Harris are acutely aware of all this. Biden says they’ve both got fire in the belly and they’re up to the job: “Under a Biden-Harris administration, the United States will put democracy and human rights at the centre of America’s foreign policy.” This holds out the hope for a radical departure from Trump’s tyrant-flattery and abuse of alliances in international relations.

First elected to the U.S Senate in 1972 when he was 29 years old, Biden cut his foreign-policy teeth in the Balkans, scrapping with the George H.W. Bush administration as well as his own Clinton Democrats in the call to arm Bosnia’s Muslims against the genocidal Serbian war criminal Slobodan Milošević. Biden spent years on the Senate Foreign Relations Committee, served two stints as its chairman, and handled several key foreign-policy files while serving as Barack Obama’s vice-president.

Despite some back and forth in his positions related to the Iraq war that didn’t sit well with Democratic Party voters—or perhaps at least partly because of all that—Biden’s approach to the projection of bedrock American values in the world is constrained by humility. He’s wise enough to know that the challenges he’s taking on can’t be undertaken by America alone.

Biden has promised to immediately rescind Trump’s Nov. 19 abdication from the Paris climate accords and overturn the Trump administration’s “Muslim ban,” a 2017 executive order that went through several iterations and court challenges before eventually taking in five Muslim-majority countries, along with Venezuela and Cuba. In his first week in the Oval Office, Biden also intends to order federal authorities to devise a plan to reunite the thousands of migrant children separated from their parents at the U.S.-Mexico border.

The harder work will take quite a bit longer, but within its first year, the Biden White House plans to organize a “global summit of democracies to renew the spirit and shared purpose of the nations of the free world.” The point will be to enlist the world’s democratic states in a common effort to strengthen democratic institutions, “honestly confront nations that are backsliding, and forge a common agenda.”

Things might get a bit more awkward for Canada than Biden’s reported intention to make good on his pledge to pull the permits Trump issued for Alberta’s Keystone XL pipeline. Biden’s approach to Beijing is going to force a hard reckoning in Prime Minister Justin Trudeau’s foreign policy circles, where accommodation to the point of appeasement has defined the Liberal Party’s postures towards Beijing. But that’s just part of it.

The American agenda Biden intends to bring to the “summit of democracies” table will require multilateral commitments from fellow democracies in “fighting corruption, defending against authoritarianism, and advancing human rights in their own nations and abroad.”

Specifically: “As a summit commitment of the United States, I will issue a presidential policy directive that establishes combating corruption as a core national security interest and democratic responsibility,” Biden has pledged, “and I will lead efforts internationally to bring transparency to the global financial system, go after illicit tax havens, seize stolen assets, and make it more difficult for leaders who steal from their people to hide behind anonymous front companies.”

Last month, Congress passed a law aimed at banning the use of shell companies that allow money-launderers, sanctions-evaders, tax cheats and terrorist financiers to register companies anonymously. The Corporate Transparency Act requires companies to divulge their ultimate “beneficial owners” through a centralized registry.

Dozens of European states, and even notorious tax havens like the Cayman Islands, have adopted similar measures. While some provinces have moved to establish public registries, Ottawa has not. A recent Simon Fraser University study reckoned that money-laundering activity in Canada—“snow washing,” as some call it—amounts to about $47 billion annually.

Biden’s global democracy initiative is also likely to hit some bumps on the road through Europe. Led by German Chancellor Angela Merkel, the European Union signed an investment deal with China last month that could seriously undermine Biden’s hopes for a united front of democracies.

While bipartisan Congressional consensus has produced stiff American restraints on trade in goods derived from forced labour in Xinjiang, the EU deal contains practically no restraint on slave labour at all, relying mainly on vague assurances that China will get around to complying with standards set by the International Labour Organization.

The EU-China deal has sparked widespread controversy throughout Europe—the EU’s member states have yet to ratify the arrangement. And while Merkel is on her way out after 16 years as Germany’s head of government, the front-runner to succeed her in the coalition she has led is the Christian Democratic Union’s newly elected leader, Armin Laschet, who is even less likely to get behind Biden’s democracy-building agenda.

While Merkel has been criticized for being too accommodating to both Beijing and Moscow, owing to the allure of Chinese markets for German automakers and the ready supply of cheap Russian gas via the Nord Stream 2 pipeline, Laschet is among Russian strongman Vladimir Putin’s more ardent European admirers.

He has dismissed alarms about Putin’s 2014 annexation of Crimea and trafficked in conspiracy theories about Moscow’s attempted assassination of Russian defector Sergei Skripal in Salisbury, England, in 2018. Laschet has also complained about the “demonization” of Putin and promoted the Moscow-circulated disinformation claim that the United States supports ISIS in Syria.

Biden has vowed to “hit the ground running” after his inauguration, and Moscow seems determined to have him running at full speed. After having nearly died by poisoning from the Soviet-era nerve agent Novichok last August, Russian opposition leader Alexey Navalny returned to Moscow last Sunday, after recuperating in Germany. He was immediately arrested, prompting a furious response from Biden’s incoming national security adviser, Jake Sullivan.

“Mr. Navalny should be immediately released, and the perpetrators of the outrageous attack on his life must be held accountable,” Sullivan said. “The Kremlin’s attacks on Mr. Navalny are not just a violation of human rights, but an affront to the Russian people who want their voices heard.”

While there has been much understandable consternation in Israel and among several Arab states about Biden’s pledge to return to the 2015 Iranian nuclear-deal that was supposed to serve as Obama’s signature foreign-policy legacy, it’s not as though a Biden administration, after Trump pulled the U.S. out of the arrangement in 2018, can just jump back in.

Biden is burdened by senior officials from the Obama years whose status and reputations depend on the deal being seen as a triumph. It’s not seen that way among the people of the region. With a singular focus on securing Obama’s legacy, the United States was paralyzed while Iran’s mayhem facilitated the Syrian catastrophe, Iraq was riven by Hezbollah-cloned militias directed by the Islamic Revolutionary Guards Corps, and Iran took on the Houthis as a proxy force in Yemen.

The International Atomic Energy Agency has confirmed that Iran has breached the deal on several occasions and in several ways, and Biden insists that Iran’s violations will have to be remedied and reversed. Even French Foreign Minister Jean-Yves Le Drian, one of the loudest advocates for an American rededication to the deal, says the 2015 terms are not good enough: “Tough discussions will be needed over ballistic proliferation and Iran’s destabilization of its neighbours in the region.”

Elsewhere in the Middle East, Biden isn’t sweating the small stuff. He’s said he’s pleased with the Abraham Accords that the Trump White House facilitated, which established diplomatic relations between Israel and the United Arab Emirates, Bahrain and Sudan, and he’s not going to bother reversing the Trump administration’s decision to move the U.S. embassy from Tel Aviv to Jerusalem.

In Latin America, the incoming Biden administration isn’t expected to adopt a radically different approach to Venezuela, except to help shoulder more of the costs associated with the humanitarian and refugee catastrophe Maduro’s government has set in motion. The northward movement of migrants to the U.S.-Mexico border won’t be addressed just by border walls and aid to the Guatemalan security forces, but by hundreds of millions of dollars to help restore economic and political stability in Central America, the source of most of the migrants.

The big challenge is China, and that’s one area of policy, foreign and domestic, where there is something approaching unanimity among Republicans and Democrats in Congress, and among Americans generally.

One of the most resilient myths of the Trump interregnum is that Trump himself stood up to China’s Xi Jinping when, all around him in Washington, there was nobody but appeasers and quislings.

The Canadian version of the myth is that Trump caused us all our troubles with China, by having us arrest Huawei chief financial officer Meng Wanzhou, which got Michael Kovrig and Michael Spavor kidnapped in the aftermath. In fact it was under the Obama administration that the U.S. Justice Department began developing its case against Huawei, and there is still no evidence that Trump was even aware that Meng was targeted under a Justice Department extradition request.

Between January 2019 and the Trump administration’s final days, more than 360 bills aimed at China were drawn up in the Senate and the House of Representatives. Most of the bills were either Democrat-sponsored or co-sponsored by Democrats and Republicans. American resolve on China’s human rights abuses has united firebrand Democrat Alexandra Ocasio-Cortez with the arch-reactionary Texas Senator Ted Cruz.

Only 12 bills ended up as law, signed by Trump, but they’re the laws that mattered: sanctions on human rights abusers in Hong Kong and Xinjiang; a pathway to refugee status for Hong Kong dissidents; the “Secure 5G and Beyond Act,” measures to bar opaque Chinese firms from trading on the American stock exchanges, and so on.

With America so deeply divided, building a democratic global coalition to deal with Xi Jinping’s belligerence might be the toughest diplomatic job the White House is taking on. But as far as domestic American politics go, it might just be the easiest.